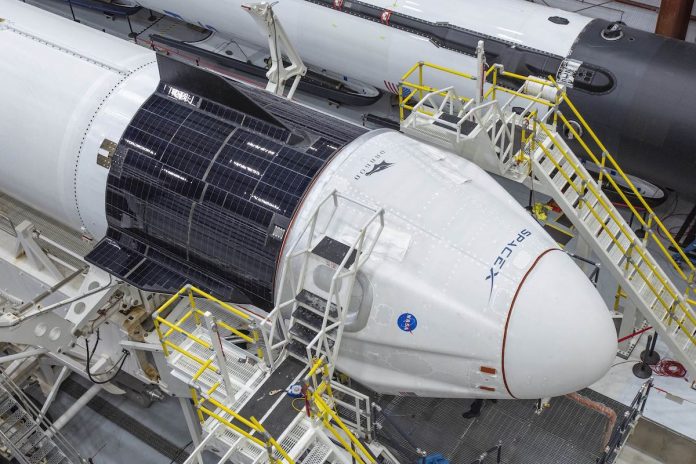 Elon Musk-owned SpaceX on Thursday (May 21) released photos showing the Crew Dragon spacecraft and Falcon 9 rocket that will carry NASA astronauts Doug Hurley and Bob Behnken into the space on May 27.

The Crew Dragon arrived at the hangar on Friday (May 15) to be integrated with its Falcon 9 launch vehicle. The photos show the Crew Dragon spacecraft inside the hangar mounted on SpaceX’s Falcon 9. Crew Dragon is 26.7 feet (8.1 meters) tall and around 13 feet (4 meters) in diameter.

Crew Dragon and Falcon 9 in the hangar at Launch Complex 39A pic.twitter.com/l758CdYXNQ

The May 27 launch is significant because it will mark the first time astronauts have embarked from American soil since 2011 after the end of the NASA’s Space Shuttle program. SpaceX has been developing this vehicle for years, ever since SpaceX and Boeing were selected by NASA to develop new spacecraft to ferry astronauts to and from the ISS.

NASA has selected astronaut Doug Hurley as the spacecraft commander while Bob Behnken will be the joint operations commander. The launch will take place from NASA’s Kennedy Space Center in Cape Canaveral, Florida.

Notably, the launch is going to take place at a time when the world is battling coronavirus COVID-19 pandemic. “NASA is proactively monitoring the coronavirus (COVID-19) situation as it evolves. The agency will continue to follow guidance from the Centers for Disease Control and Prevention and the agency’s chief health and medical officer and communicate any updates that may impact mission planning or media access, as they become available,” NASA had said in March.

Harsh Vardhan To Take Charge As WHO Executive Board Chairman: Report