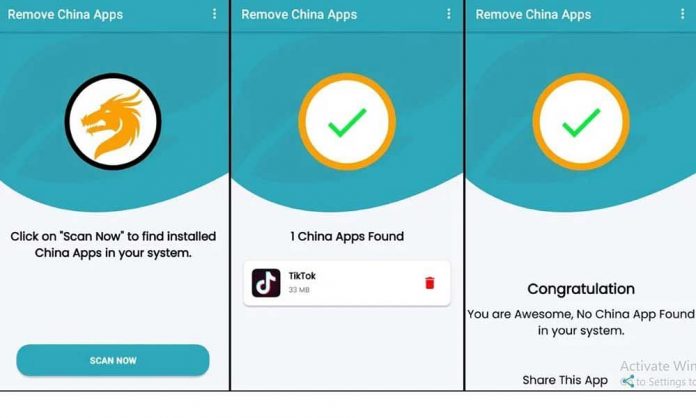 Android users can download this app for free from Google Play Store. Once installed, the ‘scan now’ tab lists apps like TikTok, UC Browser, CamScanner and others that may be installed on the phone as being “Chinese apps”. The user can choose to keep or uninstall the apps one by one. The app does not ask for permissions to access users’ personal information. As of now, it captures only apps installed by the user. The developer of the app, One Touch AppLabs, says on its site that it will soon launch an advanced version to scan and detect apps that come bundled with the operating system when a user buys a phone. The app is currently not available on Apple’s app store and the company is reportedly working towards developing the iOS version.

One Touch App Labs claims to be based out of Jaipur, with more than eight years of experience in mobile, web application design, development and management. However the ‘Remove China Apps’ is the only product listed on the company’s website.

The company has claimed that the app was developed for educational purposes and that they will not use it for commercial purposes. The company said that it detects the country of origin of certain applications based on their market research. However, it refused to give any guarantee for the information being correct and leaves it to the users to act on the information that is provided. Anti-China sentiments are on the rise in the Indian social media sphere with China being blamed for the COVID-19 pandemic, the YouTube vs TikTok spat, and the India-China border standoff.

The app which went live on May 17 is now the top free app on Google Play Store with a 4.8 rating and more than 1.4 lakh reviews.

The app apparently draws its motivation from Ladakh-based engineer Sonam Wangchuk, the man who inspired the central character played by Aamir Khan in the Bollywood movie 3 Idiots. Wangchuk’s Twitter video with the message to boycott Chinese products was widely shared on Twitter and WhatsApp. Former model Milind Soman also tweeted that he has uninstalled the Chinese app TikTok in response to the video.

Recently, another app named ‘Mitron’ which was believed to be made in India and seen as a rival to TikTok crossed 5 million downloads on Google Play Store but a Pakistani firm Qboxus said that the source code was purchased from them.

Hacker of Microsoft and Sony is behind the bars!