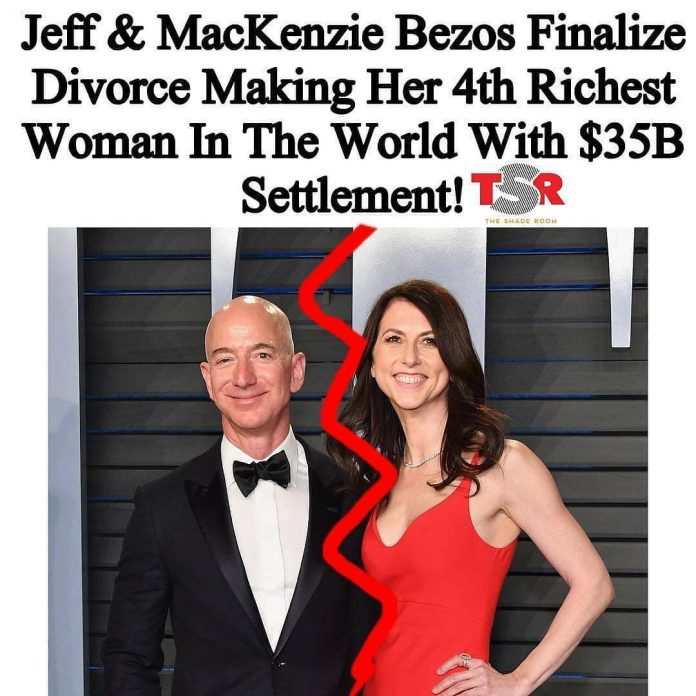 San Francisco, July 6 As Amazon turned 25, its Founder and CEO Jeff Bezos’ divorce from MacKenzie Bezos — his wife of 25 years — was finalized when a judge signed an order for separation and making MacKenzie richer by a whopping $38 billion.

Bezos gets roughly $1.52 billion a year since she got married to the Amazon Founder and CEO.

According to a Bloomberg report, a King County judge in Washington (Seattle) signed an order on Friday setting the stage for the transfer of 19.7 million shares of Amazon.com which is 4 percent holding that is valued at $38 billion to MacKenzie.

The moolah takes her to the 22nd place on the ‘Bloomberg Billionaires Index’ a ranking of the world’s 500 richest people.

Jeff has retained 12 percent stake (59.1 million shares) worth $114.8 billion in Amazon, still making him the richest man on Earth.

The Bezos’ couple finalized their divorce in April in what was reported as the biggest divorce settlement in history.

MacKenzie has decided to donate half of her $38 billion worth alimony to investor Warren Buffett”s philanthropic campaign the Giving Pledge.

The Giving Pledge, founded in 2010 by Buffet along with Bill and Melinda Gates, has drawn 204 billionaire pledgers, including WhatsApp Co-founder Brian Acton, Tesla CEO Elon Musk and Facebook founder Mark Zuckerberg and his wife, Priscilla Chan.

“My approach to philanthropy will continue to be thoughtful. It will take time and effort and care. But I won’t wait. And I will keep at it until the safe is empty,” 48-year-old MacKenzie wrote in an open letter recently.

MacKenzie has also given her stocks in other companies. “Happy to be giving him all of my interests in the Washington Post, Blue Origin, a private space company and 75 percent of our Amazon stock plus voting control of my shares,” she tweeted recently.

The pair first announced plans to separate in January following reports of Jeff cheating on his wife, claims that he denied later.

The separation happened as the company turned 25 on Friday.

“On July 5, 1994, Jeff launched a company called Cadabra Inc,” according to the Seattle Times.

In October 1994, Bezos changed the name to “Amazon” which today is an e-commerce behemoth worth $950 billion.

MESC and SSPU organized a National Conference on the ‘Changing Landscape...