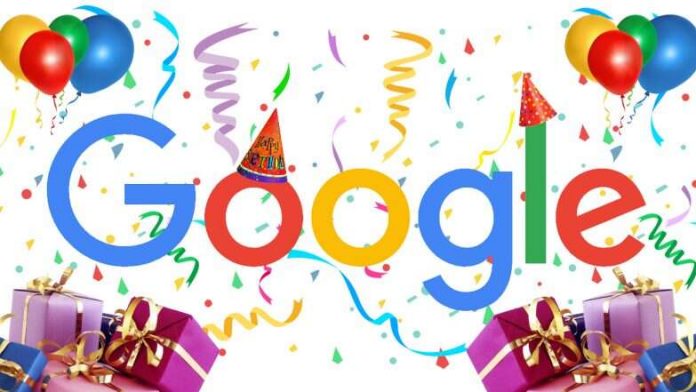 Search giant Google turned 21 on Friday and it celebrated the occasion with a special doodle that showed a 90s era desktop computer flashing its old logo on the screen.

Google is a US-based multi-national technology bellwether that specializes in Internet-related services and products, which include an eponymous search engine, online advertising technologies, and cloud computing.

The colorful doodle, in sync with the company’s online vibe, depicted a desktop computer connected to a CPU and a huge printer, typical of those in the 1990s, and the logo displayed prominently on the screen of the monitor.

The image was shown printed over a postcard floating in a mix of colorful bubbles and stars, with the founding date ‘98 9 27’ mentioned on the bottom right corner.

The search page showed the typical Google logo on the top left corner with numerals ‘2’ and ‘1’ positioned in it, carrying candles on top, to make ‘21’. Google was founded on September 27, 1998, by Larry Page and Sergey Brin while they were Ph.D. students at Stanford University in California in the US.

Google doodles which commemorate important events in history or celebrate iconic personalities of the past are known for their vibrancy and inventiveness.

“21 years ago, two Stanford Ph.D. students, Sergey Brin, and Lawrence (Larry) Page published a paper about launching a prototype of a ‘large-scale search engine’,” the search engine wrote on its official doodle page.

“We chose our systems name, Google, because it is a common spelling of googol, or 10100 and fits well with our goal of building very large-scale search engines,” the students then wrote.

“Today, Google operates all over the world in over 100 languages, answering trillions of search queries each year. The scale is large, to say the least. Happy 21st Birthday, Google!​,” the search engine further wrote.

The popular firm has its headquarters in Mountain View, California, nicknamed ‘the Googleplex’, and one of the Big Four technology companies, alongside Amazon, Apple, and Facebook.