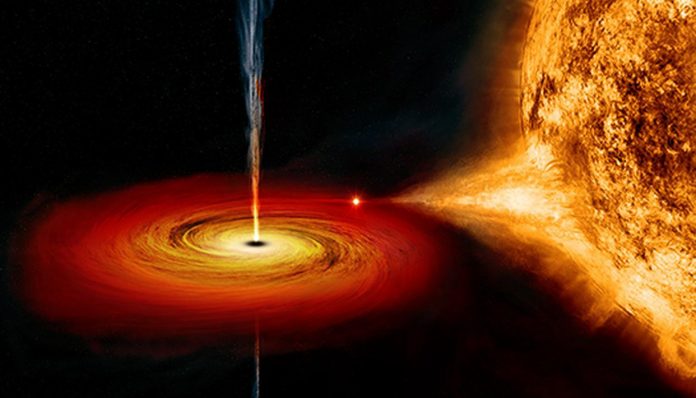 NASA’s Chandra Observatory has observed that the black hole is emitting hot material into space at a speed greater than that of the speed of light.

NASA has recently observed that a black hole is emitting hot material into space at a speed greater than the speed of light. According to NASA’s Chandra Observatory, the researchers not only caught the black hole pulling material away from a close star but also hurling hot material at a speed of more than 80 percent of the speed of light. The stellar mass of black hole, which is about eight times the mass of the sun, showed a peculiar behaviour of ejecting material as jets.

According to the official release, astronomers observed that the black hole along with its star companion named MAXI J1820+070, which is located at least 10,000 light-years away from the Earth in Milky Way, blasts away some hot material from ‘the point of no return’ and prohibits its entry. The ejections are in the form of short beams of materials or jets. Moreover, these jets are directed in opposite directions and are launched in the space along the magnetic field lines.

The astronomers have also informed that the new observation is based on previous studies on the black hole. These jets are travelling away from the black hole and towards earth from north and south direction in 60 and 160 percent of the speed of light, respectively.

The study said, “These jets are pointed in opposite directions, launched from outside the event horizon along magnetic field lines.” “The new footage of this black hole’s behaviour is based on four observations obtained with Chandra in November 2018 and February, May, and June of 2019, and reported in a paper led by Mathilde Espinasse of the Université de Paris,” it added.

#News: Scientists have caught a stellar-mass #BlackHole pulling material away from a closely orbiting companion star and hurling hot material into #space at more than 80% of the speed of light! Learn about the discovery: https://t.co/jYrSBP0OAT pic.twitter.com/BbuYLcryJA

The astronomers have stated that the materials moving farther from the stellar-mass black hole is an example of ‘superluminal motion’. This phenomenon occurs when ‘something’ travels towards the earth near the speed of light and the direction is closer to “our line of sight”. According to NASA, this implies that the travel of the object gives an “illusion” that it is faster than the speed of light.

“A phenomenon that occurs when something travels towards us near the speed of light, along a direction close to our line of sight. This means the object travels almost as quickly towards us as the light it generates, giving the illusion that the jet’s motion is more rapid than the speed of light,” the study said.