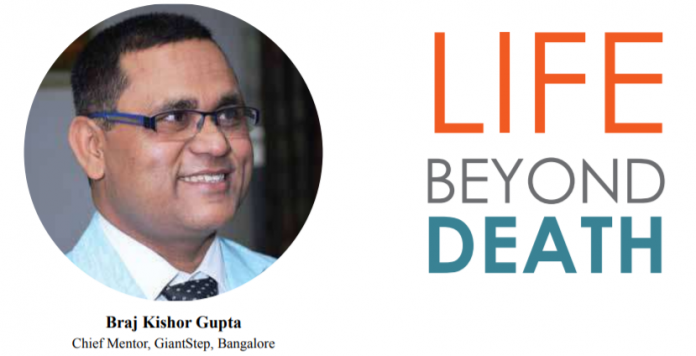 Death is a liberating force; it comes in everyone’s life but once!   It is real and tangible. It is truly secular and has an impeccable record of being just and fair to the poor and the rich alike. It does not discriminate ever among its clients on the basis of color, creed, sex, nationality, time and space. It never fails to deliver nor does it delay. It comes, comes and ever comes! What a commitment and perseverance!  Is it not a classic example of zero tolerance and discipline? Death has willy-nilly been there ever since life began and it will be there as long as life remains. What an eternal hope, death inspires! It’s nothing but a promise to co-exist with life. Today, change being the buzzword, death alone refuses to change its course and stands firm.

It is an irony that we humans show ignorance of death until it arrives. How can we display such a laid back approach towards it?  Some of us have even the pluck to reject its very existence, as if death were only a virtual reality? Many even threaten death as seems evident from the following lines of a famous Metaphysical Poet:

One short sleep past, we wake eternally,
And death shall be no more, Death thou shalt die.

It is important to accept the simple truth about life and death in the same breath.  Life is real and so is death. Why are we so obsessed with life? Why do we eulogize Life and demonize Death? Why is life often depicted as joyful, though, in reality it is an unending saga of suffering till death liberates one? It is this human suffering that also constitutes the gospel truth of Gautama Buddha’s philosophy. Let us be fair to death, shedding all our prejudices against it. Or death will continue to torment us, every time, a loved one passes away.

However, the best way to deal with death would be to get ready for it.  We can take life as a rare opportunity for leaving an indelible imprint behind that even death cannot obliterate. It must gladden our heart that every religion talks of ‘Life beyond Death’. Every soul is endowed with the power and prowess to transcend death. Death could be the beginning of a new life, provided, we make our living sublime. When you live a meaningful life, you will be leaving legacy, making death rather subservient to Life.

But whoever comes to Him as a believer having done righteous deeds- for those will be the highest degrees { in position} Text- 75, Surah 20- Ta Ha.