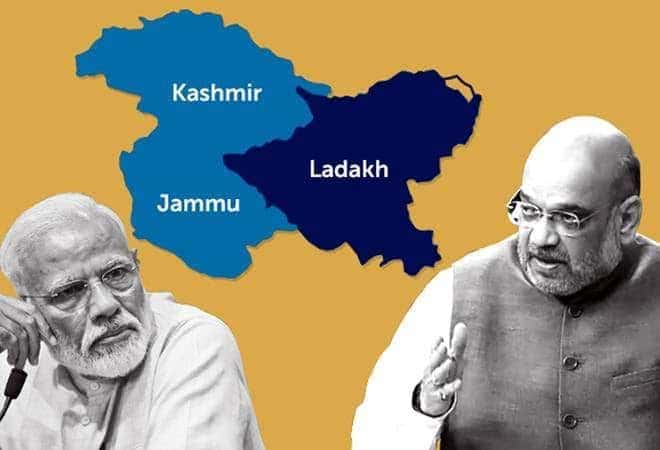 There is an old joke where a tourist’s car got stuck in a muddy patch and raising acceleration didn’t help. A local on a bullock cart was passing by and helped him in exchange for a certain favour. This seemingly helpful local told the politician that he assisted many such people who regularly got stuck somewhere on the stretch.

‘At night? So far away from everywhere?’

‘You see, someone has to make sure that this stretch remains slushy.’

Well, some believe that if Kashmir were that slushy patch, there must be some locals intent on keeping things slippery there. As a corollary to this joke, let us assume that Modi happened to drive by, noticed and understood what was happening, and… well, we all know about the declaration on the 5th of August this year.

The above is simply a humorous interpretation of a joke that I read on whatsapp a few days back. However, if newspapers are to be believed, the political command in the state has so far been in the hands of the Abdullahs, the Muftis, and the Shahs and their fiscal interest (sometimes in ways that may need intervention by investigating authorities, feel some political analysts) is evidently obvious in businesses spread across the board. Amit Shah has specifically mentioned that “earlier Jammu and Kashmir was ruled by three families” and even the PM has tweeted: “For years, vested interest groups who believed in emotional blackmail never cared for people’s empowerment. J&K is now free from their shackles.”

Social media is brimming with stories connected with Article 370 but what really matters is what Faizan Mustafa explains in an article in Indian Express. He writes that “Monday’s Presidential Order has extended all provisions of the Constitution to Jammu and Kashmir, including the chapter on Fundamental Rights. Therefore, the discriminatory provisions under Article 35A are now unconstitutional.” However, there are many who erroneously assume that this abrogation makes J&K an integral part of the country. These people do not realise that it was already so under Article 3 of the J&K constitution and the preamble there lays no claim to sovereignty. What this ‘abrogation’ has actually done is to withdraw some autonomy that was there for the state as integration was already live and kicking. Besides revoking Article 370, this order also means that the state of Jammu and Kashmir will be bifurcated into two union territories – Jammu and Kashmir (with a legislature) and Ladakh (without a legislature). Business Today reports that “Home Minister Amit Shah said that revoking Article 370 is necessary as it undermines the parliament of India.” Shah had reportedly said that “the law of the nation does not reach Jammu and Kashmir. Pakistan uses this to instigate separatism in the hearts of people there.” Yes, it is also a fact that corporates and individuals will be in a position to purchase land in J&K. Those who are not from the state may also be eligible for jobs there.

There are thousands of irresponsible updates bobbing around in the borderless oceans of the social media platforms and they have the potential of undermining and damaging whatever good any responsible action by a government can be capable of. What the two new UTs actually need is positivity in every sense of the word. Unnecessary rhetoric must obviously be questioned. When an eminent politician like Chidambaram says that the day as being the “the worst day in the Constitutional history of India” and the Leader of the Opposition in the Rajya Sabha Ghulam Nabi Azad proclaims that he “had never imagined that the head of the state which is India’s crown will be chopped off”, one wonders if this is the right way to go about even in the murky world of politics. Mehbooba Mufti called it as “the darkest day in Indian democracy” that will have “catastrophic consequences” and Omar Abdullah said it was a total “betrayal of trust” of the people of Jammu and Kashmir. Countering all these notions, Amit Shah has simply stated that “a historical wrong has been undone today. Article 35A came through the back door without following the procedure under Article 368 of the Constitution of India. It had to go.” It has gone and so must all thoughts of disorientated naysaying.

The entire J&K chapter is worth exploring and examining and must not be man-handled by those who are bent upon behaving like juvenile delinquents. There is no one who has won or lost as the abrogation of Article 370 is neither a battle nor a track and field event. The two UTs (Jammu & Kashmir and Ladakh) have a lot to look forward to. There are issues related to education and employability of the youth, setting up of industries and restructuring employment quotients, empowerment for women, ensuring that every government scheme including those related to reservation and protecting the rights of the under-privileged reach and are implemented in the right spirit. There are issues related to corruption and economic offences that have to be dealt with. The areas needing encouragement include tourism and infrastructure development. The entire area is brimming with a lot of potential that has perpetually been rendered recessive for decades by issues that have done no one any good. LiveMint reports Kanwal Sibal as saying that “the international community would not have any problems investing in Ladakh in solar energy that the Prime Minister talked about, or in Jammu. But for investments to flow into the Kashmir valley, it will take time with people waiting to see how the situation pans out. Pakistan will try to raise tensions to keep the pot boiling.” The point is that our primary aim must be development through harmony… despite all the destabilizing notes that our neighbor to our West may attempt to sing.

Article 370 – is it political pluck or incompetent tomfoolery? No one has as yet a definite answer to this question though the voice vote of the entire nation says “Aye!”

THE WAY A PHOTOGRAPHER SEES WATER

ESSCI & SRMIST, Kattankulathur will jointly work for mapping Skills requirements of the industry...

Fashion Trend Forecasting – An Emerging Career in the Fashion Industry