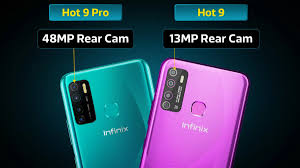 Infinix Hot 9 made its debut in Indonesia in March, however the India variant is expected to be different from the Indonesian model.

Infinix Hot 9 series, including the Infinix Hot 9 and the Infinix Hot 9 Pro, will launch in India today at 12pm (noon). The launch was previously teased by the company through its Twitter handle. The two phones pack quad rear camera setups and a hole-punch display design. As of now, Infinix has not shared the details on pricing or configurations that the phones will come in, but that will be made clear at launch.

To recall, the Infinix Hot 9 was launched in Indonesia in March, however the India version is expected to be a tweaked version of the phone. Infinix Hot 9 Pro, on the other hand, will make its global debut in India. The Infinix Hot 9 India version packs a quad rear camera setup with a triple-LED flash. The camera setup will include a 13-megapixel primary camera, accompanied by a 2-megapixel depth sensor as well as a 2-megapixel macro shooter. The fourth camera is said to be a low-light sensor. It will also include 5,000mAh battery and a fingerprint sensor on the back.

The Infinix Hot 9 Pro features a 6.6-inch HD+ display and comes with four cameras on the back, just like the non-Pro variant. However, the primary camera here will be a 48-megapixel sensor, accompanied by a depth sensor, macro camera, and a low-light sensor. Infinix Hot 9 Pro will also include a quad-LED flash. It will be backed by a 5,000mAh battery as well, and feature a rear fingerprint sensor.