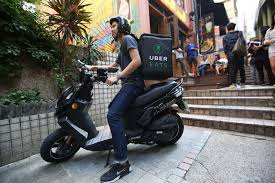 As the online food delivery market in India goes hyper-competitive, Uber Eats, which is yet to create a significant mark on the Indian palette, is now eyeing young professionals in metros and joint families in smaller towns to increase its footprint.

Amid reports that Swiggy is buying its India business and then stalled talks, Uber Eats that came to India in May 2017 is finally witnessing fast adoption of its services among millennials and joint families.

“We’re actually seeing a trend of multiple combinations of orders at once in India, which is not limited to just Friday nights or festivals but on a regular basis,” says Raj Beri, Head of Uber Eats-Asia Pacific.

Earlier this year, reports said the elderly population was behind the success of Uber Eats’ business in Japan.

Beri said the platform’s growth in India is beyond age demographics and more towards collective adoption of digital food delivery services.

Countries in the Asia-Pacific (APAC) region order more from Uber Eats than any other geography in the world, with 1.5 million unique cuisine choices available on the platform in the region.

While Beri refused to reveal the company’s market and revenue share in India, he stressed that the company’s share in the APAC region is significantly growing.

Uber Eats’ business grew by 50 percent (month-on-month) in its first year of operations in India. According to Jason Droege, Global Head of Uber Eats, India was their fastest-growing market in the world.

Uber Eats is currently available in 38 cities. Launched much later than its competitors like Swiggy, Zomato, and Foodpanda, Uber Eats is facing some problems in properly establishing itself as a food delivery platform among foodies in the country.

The company is introducing several India-first features on its app like the veg-only recommendations and cash payments.

“Content, storytelling and just being transparent with the background behind where your food is coming from is very important. It would enable communication between restaurateurs and customers,” said Nikki Neuburger, Global Head of Marketing, Uber Eats.

According to Uber Eats’ Senior Director and Product Manager Stephan Chau, the company is using advanced technologies like Artificial Intelligence (AI) and Machine Learning (ML) to safeguard its customers’ data.

“We don’t have reasons to really want to expose our users’ data outside of context. Our goal is to make sure that the users understand our steps and benefit from the transparency,” Chau said.

When asked if Uber Eats was planning on implementing Virtual Reality (VR) and Augmented Reality (AR) in its app to enrich customers’ experiences, top executives said they might work on the idea in the future.