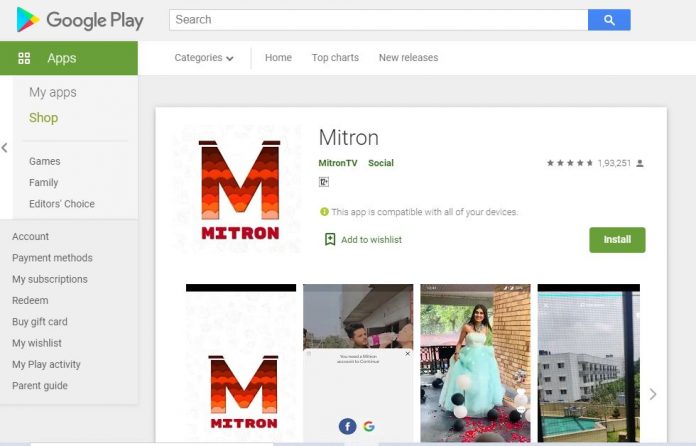 In the past few weeks, an ugly fight is trending online between YouTube and TikTok users over the content shared on the respective platforms. Patrons of the apps accuse each other of fostering crass contents on their medium. And with recent India-China skirmish at the eastern border, it has further added fuel to the anti-China sentiment in the nation and many are vying for a ban on TikTok in India.

Meanwhile, Shivank Agarwal, a student at the Indian Institute of Technology (IIT) Roorkee released a short video sharing app, Mitron (meaning Friends in Hindi), a native version of TikTok. Within a month’s time, it has grown in popularity among mobile users.

As per the latest data on Google Play store, it has crossed 50 lakh installation, becoming one of the fastest apps to reach such a milestone in the world.

Mitron app: All you need to know Mitron app offers a wide range of filters and tools for users to create, edit, and share their short videos. Like TikTok, consumers will have access to a big library of multimedia content across the world. They just have to take a video and sync any music or popular movie dialogues into the scenes.

“Our mission at Mitron is to create a platform where people can come and entertain themself with small videos posted by people across the globe and at the same time create a social incentive for people to share and create their own videos,” the company says on the Play store.

For now, the Mitron app is available only on Google Play store for Android phones only. It comes in less than 8MB in size and runs on any mobile with Android 5.0 or later versions. There is no official word on when the Mitron app will be available on Apple’s iOS platform App Store just yet. But, given the popularity among consumers, it is likely to be introduced for iPhones sooner or later.