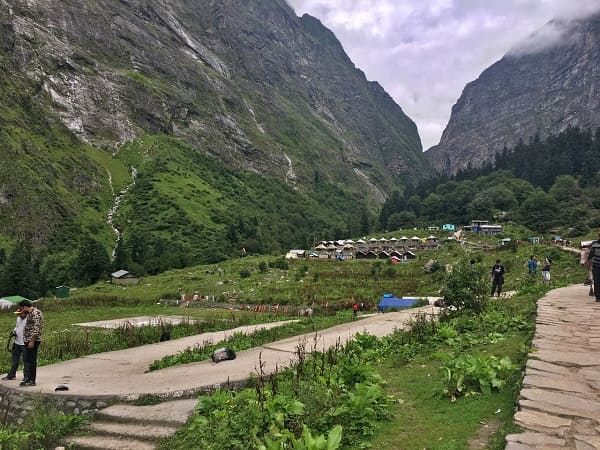 It was sometime in the nineteen-thirties that Frank S Smythe ‘came upon the lush and colourful Bhyundar Valley, the Valley of Flowers’ and he describes his adventures in the lower and upper Himalayas in his book. Smythe discovered that ‘the predominant note was peace; not the faintest breeze ruffled the herbage and the silence was the silence of a vast ocean utterly calm, though always the sounds of the streams came to the ear as a soft, almost imperceptible cadence’. It was this book that prompted me to trek to the Valley of Flowers… and though with the rising popularity of trekking and hiking we were never really in the midst of a predominance of peace, the charm of the place is unforgettable.

The overnight train from Delhi to Rishikesh and then after a nearly eleven hour drive via Rudraprayag and Joshimath, we were finally at Govindghat where we spent the night. The trek to Ghangaria begins from Poolna which is a short drive from Govindghat. There is reasonable walkable path from Poolna to Ghangaria that goes up and down and is sometimes really steep. We were literally huffing and puffing and sweating and the progress was slow. After all we had come from Delhi which is at a height of 216 metres or 709 ft and were now walking from 1,920 metres or 6,300 ft to Ghangaria which is at 2,926 metres or 9,600 ft. The distance has increased now because of the flash floods in Uttarakhand and it took us nearly 8 hours to reach our base as we had to trudge up and down for somewhere between 12 to 14 kms.

Our heavier bags were carried by Gajender Singh Negi, our Kandiwala, who would be coming back to Poolna after dropping our bags at the GMVN resthouse at Ghangaria. Gajender was a sport and waited for us to catch up with him every few hundred metres. I asked him if the trek is going to get easier after negotiating every steep climb and he smiled and said, ‘This is the easy part. The climb through the forest after we cross the river is really steep.’ Our trekking poles were quite helpful though there were shops en-route selling walking sticks for around 40 INR.

Reaching Ghangaria is the first leg of the trek. To simplify, one stays at Ghangaria and goes on to the next leg, that is, trek to the valley of Flowers. The third day is trekking to Hemkund Sahib and then on the final day one must have the energy left to trek back to Govindghat. Despite a stone-layed path from Govindghat to Ghangaria, the first leg itself can be physically demanding… however, this part goes through Poolna, Jungle Chatti, Bhyundar, and Randhuni villages and the path along the river Alakhnanda goes through a dense forested area. There are large sheds and benches after every km and even paid public restrooms. The few shops owned by the villagers sell all sorts of snacks, lemon-soda, Maggi, and Pyaaz-chana. The locals sweepers and cleaning staff are throughout this route minimizing the possibility of any trekker stepping on mule-shit. At one point as we rested our tired limbs, Gajender told me that there were plans to construct a motorable road from Govindghat to Ghangaria in the near future. If this plan really comes through it is going to spell disaster for the region, I thought. There will be hordes of city folk driving through a region where one can still hear the calls of birds, the distant gurgle of a fast flowing river, and the sound of wind whispering through Chir and Rhododendron trees. Ghangaria is a small village with plenty of small hotels, homestays, eateries, chai stalls, facility for foot or body massage, and even those willing to dry your shoes and clothes. There are a few shops selling everything from walking sticks to raincoats and ponchos. But the best part is the tourism office having multiple shows in their small auditorium showing documentaries on the valley of Flowers. One of these documentaries tells visitors about how Hanuman flew to the Garwhal Himalayas to find the ‘Sanveevani’ booti or herb to revive Lakshman, as he lay unconscious in their battle with Ravan.

Trek to the Valley of Flowers

Ghangaria to the place where the Valley of Flowers begins. Statisticians say that the valley covers around 87 square kms. The trek takes one from 2,195 metres to an altitude of 3,505 metres or 11,500 ft. This may look easy but the path that earlier went along the river Pushpawati was destroyed during the flashfloods a few years back and the new path goes winding up the mountain and then down only to keep going up and down and turning and twisting through a dense forested area with large patches of flowers that make everyone stop and admire. I am not a botanist but some of the species one comes across are Meadow Geranium, Snake Foil, Hooked Stick Seed, Himalayan Rose, Blue Poppy, River Anemone, White Leaf Hog Foot and Dog Flower. For me it wasn’t so much about identifying Geraniums, Marsh Marigolds, Prinulas, Potentillas, Asters, Liliums, Ranunculus, Corydalis, Inulas, Brahamkamals (plenty on the route to Hemkund), Campanulas, Pedicularis, Arisaemas, Morinas, Impatiens, Bistortas, Ligularias, Anaphalis, Saxifrages, Sibbaldias, Trollius, Codonopsis, Dactylorhizas, Cypripediums, Strawberry, Epilobiums, and Rhododendrons but about hundreds of pauses during the 7 or 8 km trek. Each pause meant standing enraptured by the hues and colours that are all around. No one was rushing through because this is one trek where pausing and wondering is what creates a magical charm that is going to stay on for years. The delicate creations positioned right in the centre of a difficult terrain where landslides are a frequent occurrence is enough to tell me one definition of ‘sanjeevani’ is the act of moving away from the mundane and into the heart of moments that willingly reveal the secrets of life, if only one stays long enough to listen and understand. By the way, the flowers in the valley bloom from June until September. The officials claim that there are 520 species of flowering plants here. The site was declared a national park in 1982. But let me not digress into the poetry and philosophy of this trek and hurry to tell you that even part of the trek is fairly steep with a narrow path strewn with large loose stones. No one can call this an easy trek because every time the path opts for a downward incline, the knees yelp! So yes, knee caps can help. Mules aren’t allowed into the valley and entry is ticketed. We did see quite a few who had decided not to trek but sit on a kandi or even a palki. Unlike the Govindghat-Ghangaria stretch, there are no small villages and no shops selling anything. It is wiser to carry chocolates, snacks, and of course, your lunch-pack and a water bottle. Refilling your water-bottle is easy as there are a few streams that one needs to cross. The river one meets on this trek is Pushpawati which joins the LaxmanGanga which joins the Alakhnanda that finally adds to the value of Ganga.

Once you reach the Valley after crossing the gorge and the stream that starts from Nar Parvat, you love it and love everything there. At the entrance of the Valley stands the snow-clad peak of Ratban Parvat, with Nar Parvat to the left separating the Badrinath valley from this valley, and to the right is a dense Birch forest on the hillsides. Once there, all you want to hear is the sound of nature.

The young crowd who obviously reached way before us managed to perch on the few boulders around leaving us with the only option of walking further into the valley… which was good because if you manage to walk for another couple of kilometres inside, you reach the glacier at the other end. It is only the habituated trekker and the young who do this. Those who do go further inside come across the memorial of Ms Margaret Legge who was a botanist from Edinburgh and was here in 1939 but slipped and died. She was buried by the locals and the memorial erected by her sister when she visited the spot much later.

The place is a literal paradise. One wishes to stay here forever… but the rules of the forest department are stringent and one must report to the ticketing counter by 5 in the evening. One of the finest moments of this trek was as we stood at a height and got our first view of the valley before going down and across a tributary of river Pushpawati. The eyes were mesmerized by the miles and miles of gently swaying stanzas of different colours with occasional couplets of green meandering between them in careless abandon. It does not matter how deep you walk into the valley because the moment you see it from a distance, you know you have had the best introduction to poetry. The valley has lot of mythological stories connected to it… and the ‘sanjeevani’ booti searched by hanuman is just one of the many references from the Ramayana and the Mahabharata. The title of this article mentions redefining ‘sanjeevani’ at the Valley of Flowers and so besides the minor explanation that I’ve already mentioned earlier, there are three suggestions for not just this place but for almost every other hill destination:

Each visitor generates a lot of disposable garbage during these short trips and we know how difficult and expensive it is for those involved with its disposal. There are instances where people simply throw empty plastic bottles down treacherous slopes and they just stay there. Imagine the harm that thousands of tons of such material can do to our environment. I suggest that every visitor to the hills must carry his or her disposable garbage back to the plains where disposal is easier.

Single use plastic bottles and plastic carry bags should be banned from these places. There are plenty of streams and safe water can always be piped to strategic refilling points.

The idea of having a motorable road going up to Ghangaria is completely daft and needs to be discarded without assigning any reasons. Not just this, let the entry to the valley as well as other prime hill stations remain restricted with permits that can and must be obtained from the tourism departments of the states. Chakrata and Lansdowne are good examples of how restrictions help… though the civilian authorities have allowed the villages on the outskirts of Lansdowne to turn into multi-storied slums.

Women Still Have to Work Twice as Hard Globally to Break...