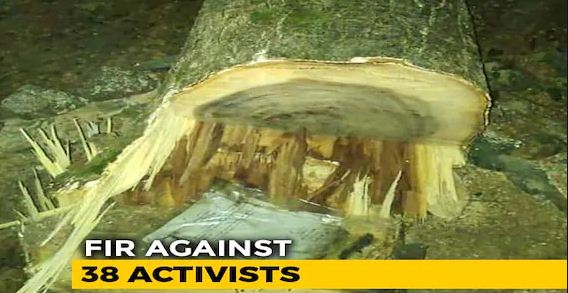 The Bombay High Court on Friday cancelled four petitions challenging cutting of trees at Aarey Colony for the metro car shed. The process to raze the trees began hours later

Mumbai: Over 20 activists have been arrested since Friday night in Mumbai after they tried to stop the authorities from cutting trees at Aarey Colony, where a car shed for the Mumbai Metro will be built. Bulldozers rolled into the area as protesters looked at them from a safe distance. 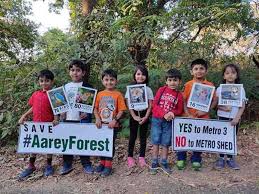 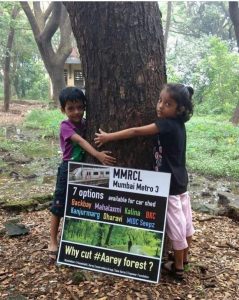 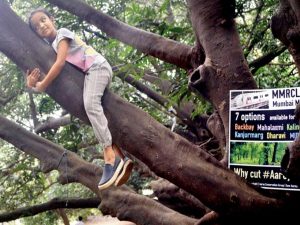 Any gathering of four or more people is banned now, the Mumbai Police said.

A police case (First Information Report) has been filed against 38 people, Mumbai Police public relations officer Pranaya Ashok said. Twenty have been arrested and they will appear in a court today, he said. 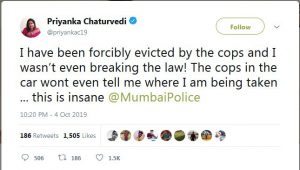 Shiv Sena leader Priyanka Chaturvedi said the entry points to Aarey have been blocked by the Mumbai Police. “I have been forcibly evicted by the cops and I wasn’t even breaking the law! The cops in the car wont even tell me where I am being taken… this is insane,” she tweeted.

Some protesters camped just outside Aarey through the night as the police stopped them from entering the area, sources said. They alleged the authorities came under the cover of darkness to raze the trees.

The Bombay High Court on Friday cancelled four petitions challenging cutting of trees at Aarey Colony for the metro car shed. The process to raze the trees began hours later.

The activists gathered at Aarey Colony after a video showing a tree being cut was widely circulated on social media. They alleged the trees were being cut illegally.

According to the rules of the Municipal Corporation of Greater Mumbai (MCGM), trees can be cut 15 days after posting the court order to do so on its website, sources said.

“…the permission for the tree cutting of Aarey metro 3 Car shed depot was uploaded on the MCGM website on 4th October 2019 evening and tree cutting began the same night. The courts are shut for the weekend and then for Dussehra. We need time to challenge this in court, which we will not have and by the time courts reopen, the forest will be gone,” the activists said in a statement. 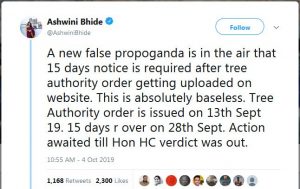 However, Mumbai Metro Rail Corporation Managing Director Ashwini Bhide denied this allegation. “A new false propaganda is in the air that 15 days notice is required after tree authority order getting uploaded on website. This is absolutely baseless. Tree Authority order is issued on 13th Sept 19. 15 days r over on 28th Sept. Action awaited till Hon HC verdict was out,” Ms Bhide tweeted.

“What is the hurry that they are cutting down trees in the middle of the night,” one of the protesters told news agency ANI.

“It is saddening to see that the trees which provide life to others are being cut. This is happening when the government itself is urging people to plant more trees,” said another protester, Albert Michel.

After the video surfaced, Gujarat Independent MLA Jignesh Mevani and Shiv Sena leader Aaditya Thackeray appealed to the people of Mumbai to resist the “illegal” action. 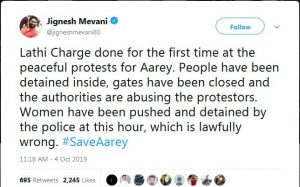 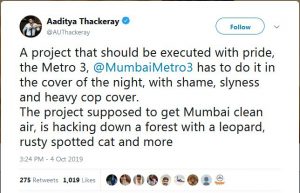 Activists had approached the Bombay High Court to stall the government’s plan. The court, however, refused to intervene, saying the matter is pending before the Supreme Court and the National Green Tribunal.

“The greens (environmentalists) fail in the instant petition because they have lost touch with the procedure to be followed as per law. The clock cannot be put back. We do not make any comments thereon as the petitioner has to now swim or sink before the Supreme Court… The issue is pending before the Supreme Court and the National Green Tribunal. Hence, we are dismissing the petition on the principle of commonality and not on merits,” a bench of Chief Justice Pradeep Nandrajog and Justice Bharati Dangre said on Friday.