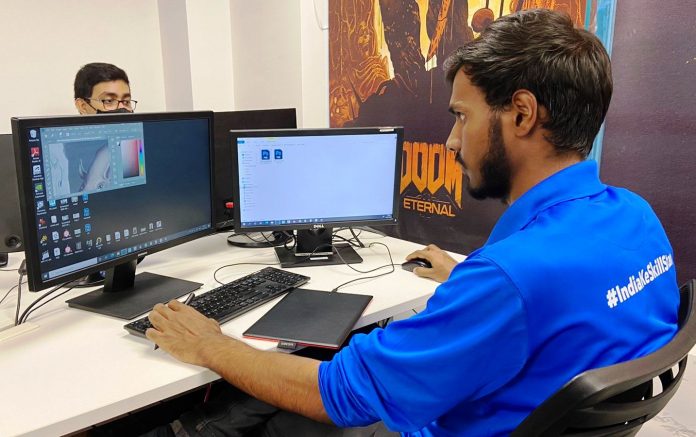 Gurgaon: Media and Entertainment Skills Council’s candidates Pankaj Singh and Subhajit Daw won the title of ‘medallion of excellence’ in the category of 3D Digital Game Art in WorldSkills Australia 2022. The students from across the world had participated virtually in the Global Skill Competition.
Subhajit Daw & Pankaj Singh both are undergoing rigorous Skilling for World Skills Shanghai 2022 at Lakshya Digital a keyword studio of game development in Gurugram.

“I concentrated on winning the gold medal from the first day of the training and competition. It needs a lot of time, devotion, and hard effort,” says Pankaj Singh, gold medallist at India Skills competition 2022. The preparation process was really challenging; therefore, I must constantly be prepared to offer my best and devised plans based on my skills and shortcomings in order to achieve.” “I also focused on the test format, technicalities, and equipment familiarisation, which helps to produce an organic model and display both the modelled assets inside Unreal Engine,” Pankaj added.

VFX diploma holder Subhajit Daw says “I am preparing to win the gold in worldskills Shanghai competition. The Australia Global Skills Competition was very tricky and hard. So, I have spent more than 8 hours in a day with full concentration and dedication to the work. And there is a second thought that hard work is the key to success, but to prepare mentally and physically both are equally important”.