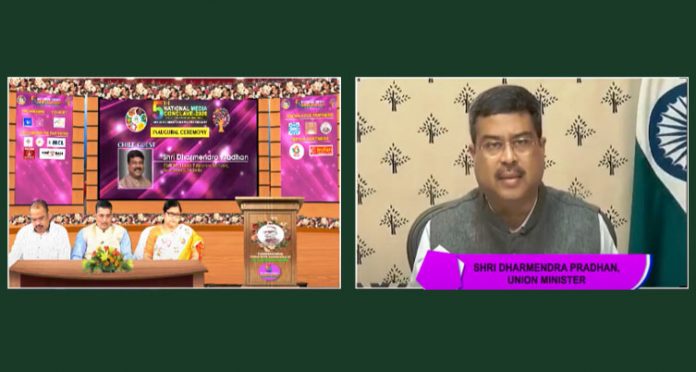 New Delhi/BHUBANESWAR: Media is a watchdog and has a key role to play in the vibrant democracy of India. The government has focused on citizen-centric communication in a language they understand through various platforms they access, be it TV news, radio, social media or online digital media, Governor of Odisha Prof. Ganeshi Lal on Tuesday. Addressing the closing ceremony of three-day 5th National Media Conclave-2021 virtually, he called on the media to curb the menace of fake news. Decoding the meaning and role of media, he said media is similar to meditation – mindless agitation. Legendary sages like Adikavi Valmiki, Vyasa, Swami Vivekananda among others have contributed a lot to the world literature due to media and meditation, he added.

Acclaimed journalist and founding Editor of People’s Archive of Rural India (PARI) P. Sainath spoke about the state of media in the country and how it has changed over time. He said despite every region of the county facing different social issues like climate change, farm crisis among others, the media does not report about it. The senior journalist said, “Indian media is politically free but imprisoned by profit. The crisis facing organized journalism is more fundamentally a revenue problem. There is a huge distinction between media and journalism. Corporations have made this distinction for me. There was a time when media and journalism meant the same thing. Now, there has been a shift in the moral universe of the journalists. Media is a business…journalism is a calling. The death of journalism has come with hyper-commercialism. The mainstream media now has turned into a dominant media due to corporatization.” He also recounted the contributions of Raja Ram Mohan Ray, Mahatma Gandhi, Bhagat Singh and Dr. BR Ambedkar to the cause of Indian journalism. He said it is a matter of regret that contemporary news organizations are completely controlled by corporate entities that go only by profit figures. He cited the instance of the media’s pandemic coverage that was completely sugar-coated and one-sided. He also expressed his concern over India’s growing economic disparity and said India’s dollar billionaires increasing while the underprivileged section continues to suffer.“The current generation in urban India was a foreigner in its own country as its connection with rural India— which holds 69 per cent of the entire population — has been badly eroded. Barring a few exceptions, everybody sitting here was a villager four generations ago. We have lost the connection. It is not only sad but dangerous,” he said.