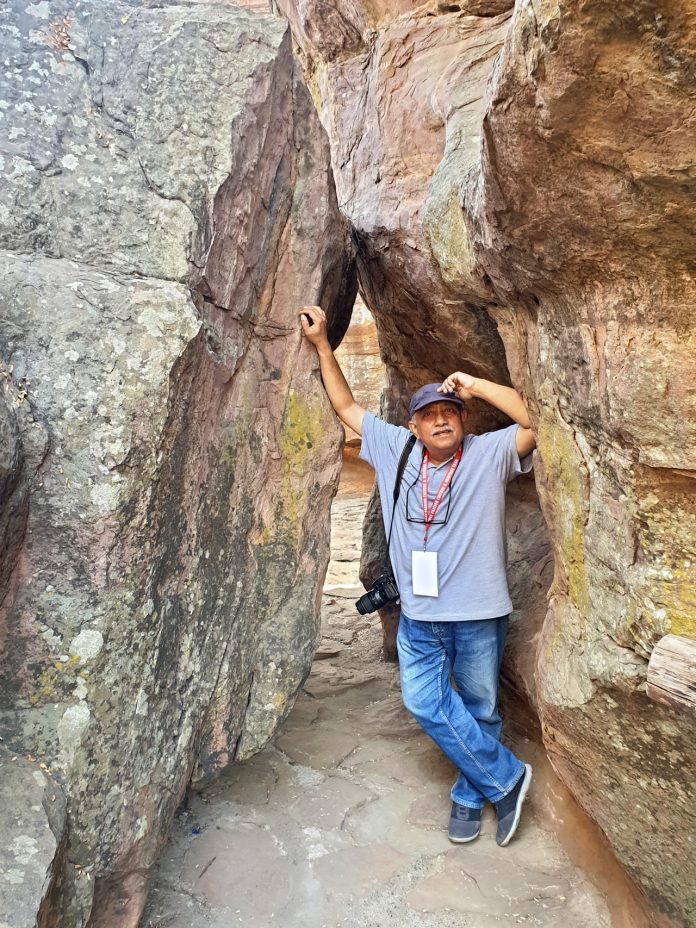 There is an explorer within each of us. There are those who move to the mountains and explore the sublime beauty of nature and capture their impressions for others to find solace in them. There are those who find joy in culture or history or even religion. The spirit of exploration is what keeps the travel instinct in us alive and keeps us lively all the time.

The wish to explore the past led me to be a part of the Times Passion Trail in March this year and we went around a number of culture-rich spots in Madhya Pradesh. Our first stop was Bhimbetaka, near Bhopal… and this is where I realized that story-telling as an art-form has been existing for ages and not a new phenomenon of the marketing communications or brand building world that we live in. Come with me and find out what Bhimbetaka is all about.

As we drove towards this UNESCO World Heritage Site, a board announced that the site is considered ‘one of the earliest cradles of cognitive human evolution.’ The quartz-rock formations here have hundreds of pictographic clusters on rocks and shelters and it is no wonder that the place is called the stone-age version of the modern Louvre! 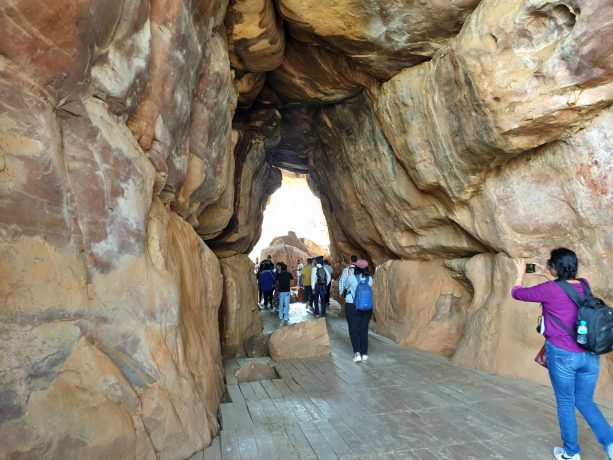 This place is barely 50 kms away from Bhopal, the capital city of MP and driving there on a smooth and obstacle-free road is a pleasure. The final leg of the approach goes through an incline within the Ratapani Wildlife Sanctuary, a one and half hour drive south of Bhopal if one is driving towards Hoshangabad. One has the choice of getting down at Obdullahganj which is which is 5 km before the Bhimbetaka junction and hire a slow moving rickshaw to let the surroundings slowly enter one’s thoughts. Alternatively, one can opt for the 3 km uphill hike – and it is a great choice during the winter months as the climate doesn’t make one sweat so much then. We were in a bus that took us right to the entrance of the rock shelters.

The first realization that one is quite literally surrounded by the past, comes when one reads that the work here was begun around 100,000 years ago… and Mr K K Muhammed, an eminent archaeologist (Padmashri Karingamannu Kuzhiyil Muhammed) who has been with the ASI informed us that it is here that one finds the first signs of documented human life on the Indian subcontinent. 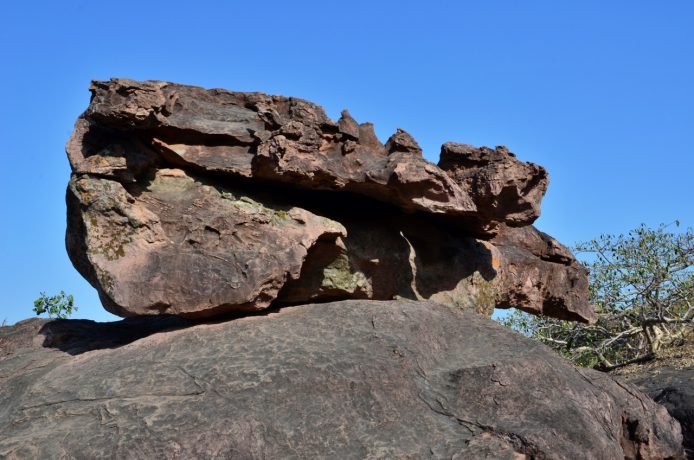 The thrill of the past is in knowing cultural history

So yes, the 700 rock shelters in the area, of which only a dozen or so caves are open for the public as the rest are a part of the Ratapani Tiger Reserve, have a lot of secrets to reveal. For those interested in the background history of this site, the shelters lay undiscovered and unrecognized until 1957 to be finally hailed as a UNESCO World Heritage Site only in 2003. Mr Muhammed told us the story of how W S Wakankar, an Indian archeologist got down his train and a local hermit led casual but curious walk up the hills had him stumble upon these rock formations.

The art-forms in the rock shelters 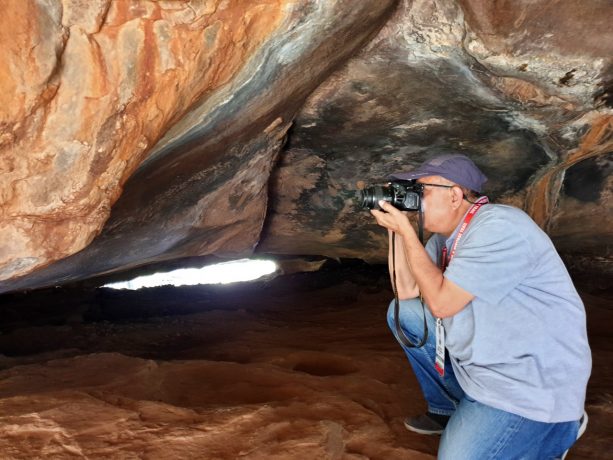 The dozen or so shelters here have an astounding 453 paintings done by the cave dwellers centuries ago. These creative souls from the past obviously had no modern day equipment to help them and so these were done without brushes, easels, and paints as we know them today. The artists and chroniclers from the past used haematite, a reddish-black mineral of ferric oxide… and around 20 variations have been found. This means that etchings were done with sharp objects like stones and they have all survived all these centuries despite having no grinding, plastering, and smoothing concepts existing then. It isn’t as if everything was done at one go because the dating of the paintings and etchings has shown that the Mesolithic hand imprint here and several cup-shaped indentions are from 10,000 BC. There are examples even from the more recent Sunga Era as they have an edict here from 100 BC. What really surprised me is the depth of story-telling all around.

Yes, our ancestors probably had just as many story-tellers amongst them as we have in this day when the internet has opened the gates for millions of us to tell our stories through words, photographs, illustrations, and sketches.

On a closer look one can discern stories here and not just random rock pictographs of lions, tigers, elephants, horses, rhinos, gaurs, and blackbucks. For instance, there is one where one comes face to face with a mahout riding an elephant through a literal maze of other animals. Hunting and war scenes are as frequent as those where human interactions can be noticed… and thus it is a literal medley of thought-inducing dance parties (if I be spared the modern way of defining entertainment), family dramas where, if you stand and silently you can hear the conversations clearly. And yes, there are people with drums and actions that resemble sensual gyrations and a lot of joyous inter-mingling there. 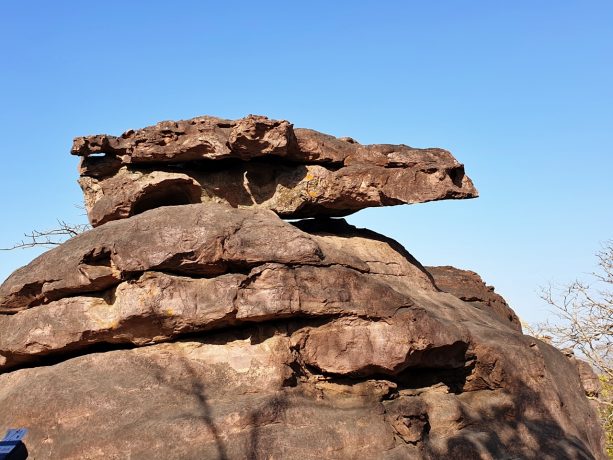 I stood there and wondered if some drum manufacturer was actually selling his invention through etchings and paintings… or maybe, some travel agency of the yore was goading people to come out of their homes and discover the world… or maybe a war consultant was communicating his tactical advances to the opinion leaders then. You see, stories have this fascinating effect on my mind and it is easy for a person like me to flow with the narrative. The point is that these rock shelters have scores of narratives that the creative writer or any artist will undoubtedly find mesmerizing.

The place has large and small shelters with their own bonanza of illuminating artworks that aren’t always angry buffaloes, quizzical antlers, bossy elephants, and over-confident lions and tigers drawn without the sanity of a story to bind them all. I mean, the giant chicken on one of the walls appears strange but probably tells me something about hunger pangs or the importance of chicken breeding for food… but then it is just the story-teller within me imagining things here. The truth is that the paintings, including the ones in the auditorium cave that is 39 metres in length and 17 metres in height, have stayed on all these centuries to tell their interpretation of life as it happened then. And yes, besides the conventional family scenes and hunting scenes here and there, one does come across even a royal entourage with warriors on horseback, angry men who are obviously unhappy with the decisions that the head of their tribe might have forced upon them… and it is the varying sizes that communicate all this.

No, there are no cars, trams, buses, airplanes, and trains here… and one mercifully doesn’t come across a modern day politician who has had his picture etched to say that he did a lot for people even centuries ago! No such Ha! Ha! Moments here because the shelters have a solemn message underlying every line and one that unambiguously says that story-telling started a long long time ago.

Explore these shelters and create your own stories

The world today needs explorers because it is these people who are interested in everything and look closely at whatever it is that they come across. Some of the characteristics of explorers includes the facts that they notice patterns and make connections, they document their impressions in whichever way is convenient to them, they aren’t afraid to move out of their comfort zone and alter their paths is needed. Explorers encourage a personal dialogue with their surroundings and hold meaningful conversations with everything they observe. Explorers are the kind of investigators and story-tellers that the world needs.

Education Democratised With the Opening of the Digital Sector

An Apple Watch Saved This Man’s Life by Calling For Help...