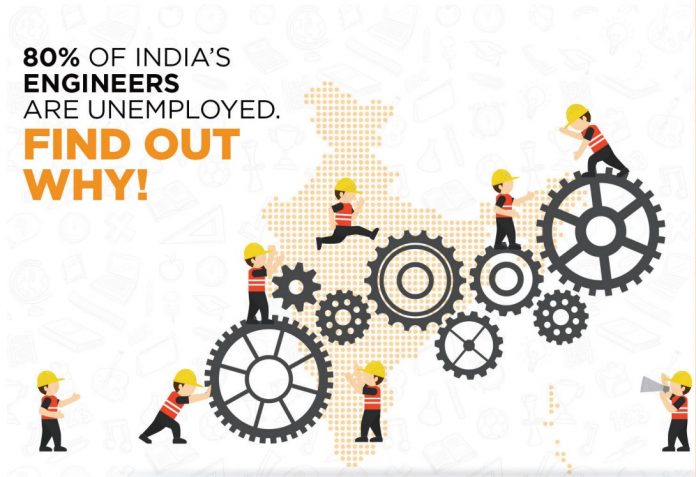 One of the most desired fields of study in India, engineering has witnessed a trend of rising unemployment for years. And as things stand today, not much has changed.

Yelagum Rahul distinctly remembers the sweltering 2016 afternoon he received his admission letter from Telangana’s SVS Group of Institutions Bheemram. It was the happiest day of his life – his long-cherished dream of becoming a mechanical engineer would soon become a reality.

“I have been trying for a job since I graduated. I have got nothing,” says the 25-year-old. “Now, it’s become so frustrating that I feel becoming an engineer was the worst decision of my life.”

“In the four years of university, we were not taught communications skills, designing skills or even how to appear for an interview,” says Rahul, who then learned software applications like Auto Cad, ProE and Solid Works, hoping that would help. It did not.

“I recently went for a job interview at a renowned R&D company in Chennai. But they said they didn’t want freshers, as they see freshers as people they would need to train as opposed to someone with experience,” he says.

Rahul is one of hundreds of thousands of engineers in India who are unable to get jobs despite graduating from some of the country’s top engineering institutions.

NITI Aayog, the apex public policy think tank of India, says 48% of engineering graduates in India are currently jobless. This figure stood at a staggering 80% in 2018.

According to a NASSCOM survey, over 30 lakh students enroll in engineering institutions across the country every year, of which 15 lakh graduate. But only 2.5 lakh among them succeed in getting jobs in the core engineering industry.

A study by analytics firm Aspiring Minds found that only 40% of engineering students in India undergo internships while only 36% undertake projects beyond their required coursework.

“Students are trapped in a college bubble. They have little industry exposure. Only 47% of students attend industry talks and almost 60% of faculty does not discuss how engineering concepts apply to industry,” the study says.

At 55.15%, engineering holds the highest employable and skilled talent percentage among all streams of education in India, according to the Wheelbox’s India Skill Report 2022. Compared to last year, employability in India has improved marginally from 45.97% to 46.20%.

Yet, the situation of unemployability among engineers is so grim that approximately 5 lakh degree holders have applied for jobs of watchmen, sanitation workers and gardeners, according to a survey by Eduaspirant. What’s more? Nearly 4.5 lakh applicants even went ahead for these job interviews.

Rahul says he might soon become one of these engineers to consider a job entirely unrelated to his four-year study. “Imagine, spending Rs. 3 lakh on your college education, and two years after graduating with distinction, not having enough money to even recharge your phone,” he rues. 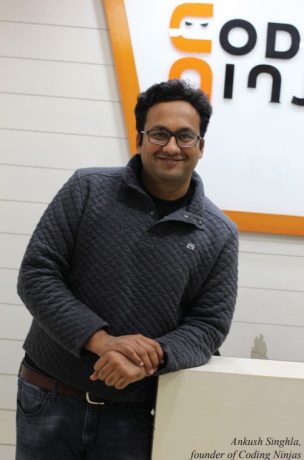 Rahul is living a life he had never imagined. “Every day, I get a feeling someone is rubbing salt on my wounds. Friends who have jobs, avoid hanging out with me. If I attend a family function, someone tells my parents about an acquaintance who works as an engineer in the US and making millions. My parents never say it, but I can sense their agony,” he says.

Rahul says he will try for a job in engineering for a few more months, after which he will take up just about “any job, big or small,” that comes his way.

Suraj Negi, 21, who graduated in mechanical engineering this year, is afraid he will end up as another number in the long list of jobless engineers in India.

“There are nearly 4000 engineering colleges in India. They produce lakhs and lakhs of engineers each year. And for every single job, there are about 300 candidates competing,” says Negi, an Uttarakhand native, who is currently applying for jobs in Delhi. “And joblessness will continue to increase year after year because those previously unemployed are also still looking for jobs,” he says.

Negi, who refused to name his university, says the problem lies with the theoretical style of engineering education in India.

“We pursue engineering the same way we passed our school exams. Engineering is more about practicalities and innovation, not just mugging up stuff to pass semester exams. Also, there are infrastructure problems in many engineering departments. Less funds for machinery. Less drive among students for innovation,” he complains.

Some years ago, Infosys founder NR Narayana Murthy, had said: “Engineering colleges in India are churning out only 25% quality engineers and nearly 80-85% percent of youngsters are not suitably trained for any job.”

Ankush Singhla, an IIT Delhi alumni, founded Coding Ninjas – one of India’s leading platforms to learn coding and get placement assistance – with an aim to fill this deepening gap between university academia and industry requirements.

After graduating in Computer Science Engineering (CSE) in 2008 from IIT Delhi, he got on-campus placement in Amazon, where he worked for a year before leaving for California’s Stanford University to complete his Master’s degree.

Singhla was working for Facebook, and trying to hire from India when he realized the “massive disconnect between what they teach in universities in India and what you need in a job.”

Only 4.8% of CSE graduates can write logic and less than 1.4% can write correct code, according to an Asipring Minds study.

This very academia-industry disconnect gave birth to the idea of Coding Ninjas, which is headquartered in Gurugram.

In the six years that Coding Ninjas has been in operation, it has taught coding to more than 1 lakh people. Of these, over 50% are graduates in civil, mechanical and electrical engineering who are trying to switch careers to IT due to lack of jobs in their sectors, says Singhla.

“We teach students what universities don’t. Colleges are focusing on theory, which surely is important, but a lot more important is upskilling,” he says.

Indian universities emphasize more on technical writing skills and memorization abilities of the students instead of deploying innovative methods that may improve their technical competence and skills, says Nitin Vijay, founder of Kota’s Motion Education.

“Conventional rules and regulations for pursuing an undergraduate program hardly allow students to think beyond classroom learning. Besides, lack of industry exposure and limited opportunities to participate in live projects and exchange programs further create employment blocks for fresh engineers,” he says.

He feels universities have to “adopt an industry-oriented approach” – the key to successful campus placements.

Professor RK Srivastava from the Electrical Engineering department of Varanasi’s IIT BHU says a higher number of students are now opting for CSE because of better job prospects and higher salaries in the IT sector.

“To study core engineering in the fields of civil, mechanical, electrical and biotechnology, you require proper infrastructure such as lab equipment, instrumentations, machinery. A large number of Indian colleges don’t even have these facilities,” Srivastava says, adding, “For studying CS, all you require is a laptop and an internet connection.”

“Engineering colleges in India are substandard. They desperately need to be audited and checked,” he says.

Srivastava points that there is a vast difference between the teaching methods at Indian universities compared to foreign institutes. “Indian universities adopt academic practices or technology long after they have matured and saturated in the industry. Whereas in the West, they encourage students to continue evolving according to current industry trends,” he says.

Satnam Singh, Assistant Professor at Gurugram’s NorthCap University, says there is more enrollment in the CS field because it is common knowledge that the IT sector is booming.

“Students want to take up CS simply because the initial salaries offered are too low for non-CS/IT grads. It isn’t as if non-CS engineers are not being offered jobs at small and medium-scale industries. They are, but because of the amount they are paying to fresh engineering graduates, no one wants to take up these jobs,” Singh says.

NITI Aayog Vice-Chairman Dr. Rajiv Kumar is pinning all his hopes on the progressive National Education Policy (NEP) 2020, which aims to increase the Gross Enrolment Ratio in higher education, including vocational education, from 26.3% (2018) to 50% by 2035.

The NEP, which was approved by the Union Cabinet of India on July 29, 2020, replaces a 1984 policy, making education more inclusive, holistic, comprehensive and far-sighted.

And while jobless engineers across India desperately wait for the situation to improve, mechanical engineer Yelagum Rahul is scanning job vacanices in a Warangal cyber cafe.

“The meagre pocket money that my parents can afford to give me goes searching for jobs from this internet cafe. I keep hoping every day when I walk back home, that when I open the computer tomorrow, there’ll be some good news,” he signs off.

India 21 day Lockdown: What is exempted, what is not