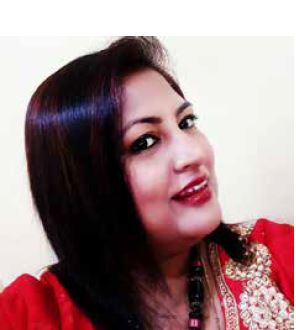 Urmi a successful career woman found it difficult to handle the little strains of everyday life. Though she would appear cheerful but deep in her she carried a sadness which drained her intensely. The feeling of despair would then turn overwhelming. She would prefer reviving the memory of losses that she had encountered in her life and she disdained the little joys that nature provided her. She had in her a need to be constantly validated through likes and comments only from a man. “The feeling is somewhat ghoulish”, she would often say it to herself staring at the blank walls, lost in the reflection of her own shadow. All that remained in her was the hoodwink of her hollow self, just the shell of being a human. She entered into multiple affairs with various men at different stages of her life until she ran into a trainer during the “Managerial grid program” which her office had arranged for a group of high performing employees. She was one of them. The persona of the trainer bewitched her and she proposed a relationship with him. Given to his vast experience dealing with young personnel the sexagenarian man suggested her that she takes professional help. And instead of entering into a forbidden relationship with her he asked her to meet a counselor trained in handling mental disorders.

Make no mistake, please. By mental disorder I mean mental illness and in no way am I branding the person “Mad”. A sound mental healthis the key to a successful life and contentment. It refers to our cognizance, conduct and overall emotional wellbeing. It’s all about how we contemplate,our perceptions, and our subsequent actions on the same. It can also sometimes mean an absence of mental disorder but unfortunately that percentage is very less. If an individual is emotionally balanced then it would not only improve his work productivity but would also help him/her in understanding good versus evil. An extensive range of factors can influence our emotional well-being. Some of these factors include genes, heredity, stress, illness, trauma, sex abuse and environmental reasons like poverty and socio-political circumstances.

According to the Mental Health Foundation (MHF), mental health problems are classified under two categories – Neurotic and Psychotic. Certain neurotic imbalanceincludes anxiety, depression, phobia, obsessive – compulsive disorder (OCD), panic attacks and post-traumatic stress disorder (PTSD). On the other hand certain psychotic imbalances include: bipolar disorder, schizophrenia, substance abuse, personality and eating disorders. The list is not exhaustive. There are other maladies as well but we need not discuss them now. They can be dealt later in a different essay.

Mental illness being a taboo subject, people normally push it under the carpet. No. Be vocal about it and get yourself treated and cured.

Urmi, on return from her program did consult a counselor where she was diagnosed of neurotic disorder. Later she was also referred to a psychiatrist by the counselor as she needed medicines to control the chemical imbalances in her brain. Majority of mental illnesses stem from certain chemical deficiency in the brain and there is where the psychiatrists come in picture. They are the ones equipped with the knowledge of prescribing the appropriate medicines accordingly.

We would talk about the role of psychiatrists in treating mental afflictions in a different essay. But in this article I would like to focus on counseling which is the first and generally considered one of the best weapons to deal with psychological issues like phobias, panics, depression, OCD, mood swings and irregular thought patterns. As I mentioned Urmi was professionally successful and also held a good academic reportbut it was her who confided that nothing can replace the benefits of real human interaction. Precisely, it’s a clear distinctive source of support. There can be nothing more sympathetic other than having a listener with whom you can talk about your feelings. But the barrier comes when you have your forbidden and personal dark issues and you feel the hiccup of discussing them with a known person or your family. That’s where a counselor comes in picture.

Counselors are trained professionals who acts like a caretaker to a person who has difficulty in dealing his/her issues. They are strangers and would listen and guide you sagaciously. They are specialists in cognitive behavioral therapy (CBT) and with each session with them not only you can start dealing with your mental illnesson your own but can also improve your quality of life. With a counselor you are open to discuss any subject or taboo under the sun and you would be free of your overcoming your sense of guilt, embarrassments or topics which you are ashamed to talk about. In case of Urmi, it was her poor self-esteem which acted as a catalyst for triggering her mental ailmentas and when she entered into a relationship with a man who would use her and then throw her like a doormat.

I too had undergone counseling sessions while dealing with my parents’ afflictions and numerous hospitalizations, fighting my divorce and retaining custody rights of my daughter. I was unable to handle such trivial yet complicated issues on my own.

If you are considering counseling to deal with your problems and maladies here are a few pointers reflecting the benefits which you reap during your talk therapy with trained and qualified professionals whom we call counselors.

There can be nothing more relieving than purging out your pent up emotions. We all have in us bottled up thoughts and feelings that tend to weigh us down. Such liberating interaction feels like lifting a weight off your mind. Gradually you can set yourself free by spelling out those irrational feelings which you have been holding in you for so long. For Urmi it was her liaisons with men and for me it was my husbands’ attitude towards me that had turned both Urmi and me emotionally vulnerable.

Watch your thoughts from a whole new world of perceptions

How do you feel when you verbalize your negative thoughts and emotions instead of grumbling in the interior of your own mind? I think we all know the answer. Not only it is cathartic but you can also get a guidance towards dealing your problem by letting them out. I had a problem of being vocal about my problems. My counselor suggested I maintain a diary and write down the thoughts and complications that are bothering me. She would then read my diary and then tailor a solution to deal with those issues. She helped me realizing that these worries and anxieties that I had been harboring in me were baseless. The fact that these doldrums are a part and parcel of life came as a huge relief to me. It worked for me, and trust me it will work for you as well once you figure out your real cause of concern and spell it out to the professional. Anentire new world of perceptions would then greet you and the feeling is liberating.

It can be a releasing experience when you know there is someone with whom you can talk to without getting judged. The very feeling that you know you can rely on someone who will not only listen to your problems but would also guide you towards solution can mean focusing on those disturbing patterns in your life which you have developed over the years. Take Urmi’s case. She needed a validation from the opposite gender. But why? Was there any need? You are good enough and that is what she realized during her sessions. It reproduced a virtuous cycle, a feeling of being able to concentrate on self-development in everyday life and focus on positive changes. That in turn will uplift your mood. It can also open a brave new world of dreams and you start taking small steps towards achieving them in your daily life.

You are not alone

Both Urmi and I thought we were the only unfortunate ones who are unable to share our issues with people even if that meant with someone closest to you. Having a complete stranger who would not only give you the freedom to talk and would also not judge will empower you with the feeling that you are not alone. There is someone to take care of you. This is immensely helpful as you no longer feel isolated dealingwith your sufferings especially something which had been bothering you for long and you feel embarrassed discussing with people who knows you.

Time you confront your feelings

Urmi had an episode of child sex abuse that she felt the need to be in to relationships with no string attached which would later leave her with a sense of remorse. I lost my mother but didn’t have time to mourn her death. I divorced the man with whom I had a love marriage and that grief would refuse to leave me. Counselling helps dedicating some time from your schedule to face or confront your emotions. An appointment with a counselor not only ensured that you are committed to them for that period but that also meant you cannot run away without facing your own feelings. You make peace with yourself and a boost in self-esteem and confidence follows. As you confront your feelings you realize the anomalies in your behavioral pattern and trust me with each session with a counselor you can get rid of them. The counselor helped Urmi understand herself and I too healed from my mental bruises. In closure I reiterate that anyone can benefit from counseling let alone only a mentally ill person. Irrespective of your age, your ailment,just a simple need to speak to someone while swimming through troubled waters these talk therapy works. It is no manipulation but it’s like sharing your deepest, dark secrets with a person who will never label you good or bad. Counseling had helped people deal with afflictions like depression, OCD, bipolar disorder, anxiety, mood swings and also a wide spectrum of hindrances which you may be facing in your everyday life. A note of caution, if you find your case to be severe, deep rooted and complex you will need medications from a psychiatrist along with the sessions with your counselor. That would be a booster. And there is also a good news. Some people even gets cured only with the help of counseling as I said they are the ones who will help you understand yourself and what had gone wrong with you but without a judgment.

Sharda University join hands with MESC for CoE & Creative Entrepreneurship for Media and...