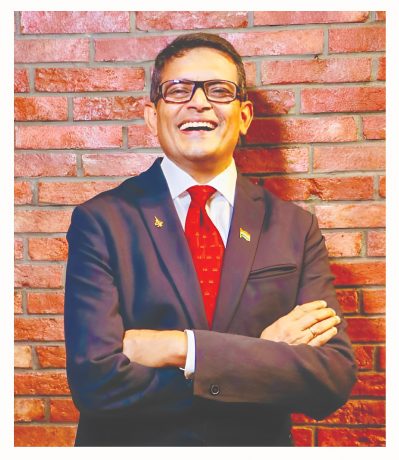 Sandeep Kumar, Head HR Operations at catering giant Sodexo India Pvt. Ltd., can’t stress enough that blue-collar workers deserve as much respect as their white-collar counterparts. In an interaction with Education Post’s Tanay Kumar, he talks about the necessity of equality at the workplace.

The need for screening talent is essential to ensure performance. What are the standards you follow?

Look at the defense forces. No matter which country, they follow a proper screening process since World War II. There’s a psychometric test, physical test and other standard screening tests.

At Sodexo India, screening differs from role to role. For some roles, we do a psychometric test, for few other roles there is a trait test. There are other screening processes, too, depending on the role. For example, if I have to hire kitchen staff, then we tell the candidate to cook, and then the food is assessed and tasted by the screening examiner.

For some roles that directly report to me, I ask them to visit our business sites, share their observations and if they would like to improve upon things. Because not only is the company recruiting the candidate, the candidate is also investing time in the company. So, it’s important for them to know the business environment.

Tell us about some of the recent trends in the personnel management domain that have emerged during the pandemic.

During the pandemic, the biggest change we saw was that the workforce started working in a very distributed environment, like away from office, or working from home. The focus of HR became the output rather than the process.

Then, during the unlock period of the pandemic when we started opening up, we received a good amount of resignations from across the country. Many people got job offers but didn’t join the organization. So, we saw the great resignation period. This was another focus area for HR.

We started creating an environment more based on trust, understanding and empathy instead of work outcomes. Wellness of the employees became the prime focus of many organizations–knowing the whereabouts of the employees, how they are, their fitness, mental health, and psychological conditions.

You have been in HR for over 20 years. What changes have you seen in this field over the years?

Things have changed a lot since I joined HR 24 years ago. The most significant change I see is the huge amount of automation, which was not there back then. It was only restricted to very few companies that were working on latest technology, according to those times, like ERP (Enterprise Resource Planning) and even ERPs were also not that agile and user-friendly as compared to today’s time. Many ERPs were somehow meant to create ease and efficiency of employers rather than employees.

Focus has also been shifted to creating a great employee experience. So, everything that creates a touch-point for an employee, the HR team attempts to create a great employee experience after that. It can be right from the beginning, when the employee has not joined and thinking of joining the organization and until he or she gets on board, and after that creating a good experience for them working at the organization.

Earlier, companies would decide which employee would go for what kind of training. But things have changed since the last decade or so. Now, the employees decide the kind of training that is beneficial for them.

Are the HR policies framed by the government beneficial? How do they compare to the policies in other countries?

Furthermore, authorities and governments have introduced the “Recognition of Prior Learning (RPL)” provision. For example, if you’re good in a particular skill or job that you have done for long at one or several organizations, then your RPL level certifies you for that particular skill. Recently, the New Education Policy (NEP) has introduced this concept in some of its provisions as a method to boost skill-based education. Schools have been asked to encourage their students to pick one skill or trade in their 9th or 10th standard. Other nations, especially Western countries, have been practicing this same thing for many years.

Another important thing we need to do, as the West has been doing since almost a century, is to stop looking down on people that we think do menial or lowly jobs. They deserve as much respect as any other person. Take a bus driver, for example. In our country, he wouldn’t get as much respect as a Ph.D., even though the driver safely picks up and drops hundreds of people every day.

And look at the irony. Many Indian students who go abroad for studies start working as waiters in restaurants and pubs in order to pay off their student loans, while these same students might very well be looking down on people doing the same job in India.

We should, in fact, get blue-collar workers properly skilled. If someone wants to be a plumber, he should be able to join a skill course on plumbing.

Centers of excellence are being set up in several organizations nowadays. How do they contribute to the overall progress of a company?

With a centre of excellence (CoE), companies try to create a team which will gather inputs from the ground, put that in a lab situation, in terms of designing the solution for the issues that you face on the ground.

There are two types of teams in HR. One is transaction-based work at the ground level on a day-to-day basis, executing and implementing the company’s strategies. Second, is a team which does the diagnosis and creates solutions so that the way of working can be improved and the implementation becomes more effective and easy to execute.

How can higher education institutions align themselves with industries to make students job-ready?

I worked with an MBA institute in Delhi, and suggested them to get attached to corporates as soon as possible. I mentored around five to six students every year. And like me, there were 40 more mentors from the industry to mentor the institute’s students.

Students must learn to practice what they are studying. And it shouldn’t be just some fragment of the course. Your career is not a 100-meter race. It is a marathon. You can’t do something big in just one day. Marketing graduates might be asked to do some sales training and sales job in their initial days and then after that the organization might consider them for a transfer to other departments. So, learn all those tasks as they will help you gain some real knowledge.

There should be more interactions and communication between colleges and industries. Today, industries interact with colleges and their students only on two occasions: either for summer internships or for placements before the final semester. They rarely communicate otherwise. It is definitely not a healthy sign.

Educational institutes should invite industry people to come and work with the students and the industry should also invite academicians and teachers so that they could be updated about the ongoing practices in the industry. And this is how we can co-create and co-design a common interface for both the industry and academia.

There are some universities and colleges which have made it mandatory to work or to be an intern in the industry for a full semester. This practice makes them really job-ready and employable.

At Xavier Institute, we were made more employable by mandatorily visiting and interacting with the workforce of several companies every couple of months. For example, in the first semester, we were asked to work with an NGO and we used to work like three-four hours a day as a normal employee. The next time, we were told to live like a laborer in a village for 10 days. It made us realize how hard a laborer works. It made us empathize with them.

Only Futuristic Education Can Fill Cracks With the Industry – Dr. Amik Garg

Four-Day Work Week Works Only If It Gives Growth – Saswati...

How essential for school children aiming to learn creative writing is...

Will IITs accept Academic Bank of Credits from non-IITs?

In Conversation With Mr. Suresh Prabhu