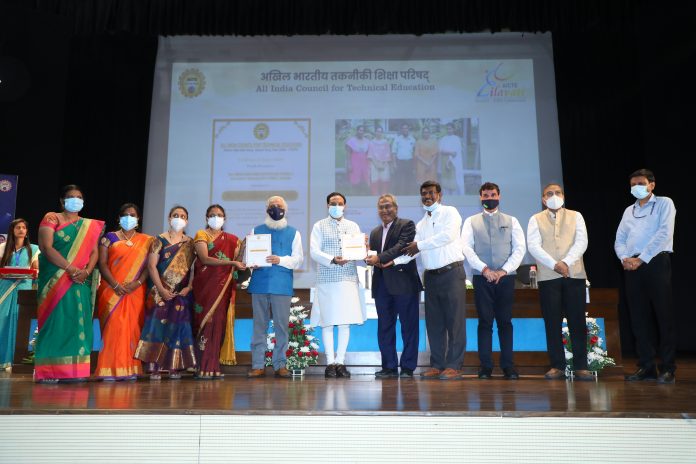 11 Apr 2021, New Delhi.  The All India Council for Technical Education (AICTE) has presented the Lilavati Award 2020 on April 11 at an event in the AICTE auditorium, Vasant Kunj, New Delhi. Shri Ramesh Pokhriyal ‘Nishank’, Hon’ble Minister of Education, felicitated the winners.

Based on the theme ‘Women Empowerment’, AICTE finalized the winners from a total of 456 entries who competed across 6 sub-themes, which include, Women’s Health, Self-Defense, Sanitation and Hygiene, Literacy, Women Entrepreneurship, and Legal Awareness. After analyzing the initial entries, the top 10 entries under each sub-theme were invited for presentation before the two committees headed by Prof SushmaYadava, Vice-Chancellor, B.P.S. MahilaVishwavidyalayaKhanpur Kalan, Haryana and Dr. Vinita S. Sahay, Director, IIM Bodh Gaya.

After felicitating the winners, Shri. Ramesh Pokhriyal lauded everyone for their efforts, and he congratulated all the 456 teams who participated in the contest. “I congratulate all the winners and all the 456 teams who took part in this contest. Women empowerment is the need of society, and initiatives like this from AICTE deserve special applause,” said Pokhriyal. He welcomed the initiative of AICTE for instituting the Lilawati Awards and stressed that such innovative steps shall be great motivation for girls to join higher education. He added that the new National Educational Policy has greatly emphasized on gender equality and students should participate in such initiatives to promote women empowerment. He added, “ …… the NEP provides flexibility & freedom to students to pursue education with Academic Credit Bank that allows continuity of education as per the learner’s ability. The NEP provides everyone with a wide field of choice for multi-disciplinary education”.

AICTE Chairman Professor Anil Sahasrabudhe thanked Shri. Pokhriyalfor attending the event amid their busy schedule. “I thank Honorable ministers Shri Ramesh Pokhriyal‘Nishank’ for attending the event amid their busy schedules. AICTE is so happy to present this year’s Lilawati award aimed at empowering womanhood in the nation. Moreover, I congratulate all the teams who submitted the entries. India is a country known for respecting and celebrating the glory of womanhood, and with initiatives like these, AICTE is also contributing its bit to empower the women in our country,” said Sahasrabudhe.

AICTE Vice Chairman, Dr. MP Poonia asserted that initiatives like these could empower women in the nation, and made it clear that gender equality is the necessity of modern-day society. “In a country like India, ensuring empowerment of women is very much necessary. Initiatives like Lilawati Awards could make people aware of the necessity of gender equality, and it will surely strengthen women in the nation,” said Poonia.

AICTE member secretary Prof Rajive Kumar asserted that initiatives like Lilavati Award will help women to come forward in society. “The Lilavati Award 2020 has been given to the most deserving team among the 456 entries. It does not mean that only the winning teams have excelled in their efforts. All 456 entries were good in one way or the other, and we picked the best among them. I congratulate all the teams and the winners who submitted their entries,” said Rajive Kumar.

BharatiyaVidyapeeth, who won the award under the digital literacy subtheme suggested that internet revolution that has happened in India post-2014 has played a crucial role in empowering women in the nation. “Post-2014, the internet revolution happened in India, and it has helped women in the country to grow, as information is accessible at their fingertips. However, even now, there are several women in the country who do not have sufficient digital literacy, and we should bring them too to the forefront of the society,” said BharatiyaVidyapeeth.

An exclusive look at Samsung Ballie.