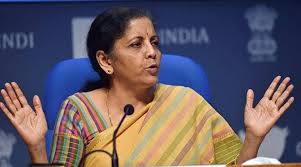 The Finance Minister will conduct another presser on Sunday May 17 at 11 am which is likely to be the last as per an official present in the presser conducted on May 16.

Finance Minister Nirmala Sitharaman has left the question of whether middle-class will get any relief as part of Rs 20 lakh crore package under the Atmanirbhar Bharat Abhiyan to interpretations.

Responding to an online question: Middle class is expecting a package for them, will the middle class get anything such as for the agriculture sector and the farmers?

FM Sitharaman said: “As and when we’re coming up with a package we’re announcing”.

In her announcements until now, the FM has addressed a wide array of sections of the society ranging from farmers, migrant workers, street vendors, businesses in the agri-sectors and MSMEs among others.

On May 16, FM Sitharaman and his team presented a string of industrial and structural reforms to boost production and ease of doing business.

However, the middle-class taxpayers are yet to see any attention from the FM’s announcements under the Atmanirbhar Abhiyan.

Earlier, the RBI had announced a three-month EMI moratorium on term loans for the people, but it received mixed response given the interest under the EMIs will have to be paid later.

This was the fourth tranche for stimulus measures after PM Modi announced the Atmanirbhar Abhiyan in an effort to revive the clogged economy due to the menace of COVID-19.

The FM will conduct another presser on Sunday May 17 at 11 am tomorrow which is likely to be the last as per an official present in the presser conducted on May 16.