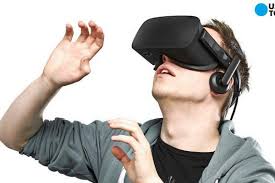 Having been around for nearly five years now, Virtual Reality (VR) headsets are yet to find adoption among the masses.

You only find them tucked away in a corner at the neighborhood mall where kids wearing head-mounted devices (HMDs) experience virtual games. Even those who bought VR headsets either as an independent unit or bundled with smartphones have dumped those at home.

According to the International Data Corporation (IDC), the global Augmented Reality (AR) and VR headset market returned to growth after a full year of decline in the first quarter this year, as global shipments reached 1.3 million up 27.2 percent from the same quarter last year.

VR headsets represented 96.6 percent of the combined AR/VR market during the quarter with strong volumes from top companies such as Sony, Facebook, HTC, Pico and 3Glasses. There is no doubt that enterprise AR is evolving quickly, especially in the fields of healthcare, education and at firms that aim to enhance customer experiences.

“Many companies are actively looking for hardware solutions they can use to improve existing business processes and drive new ones,” says Tom Mainelli, Group Vice President, Consumer and Devices Research, at IDC. However, VR headsets have failed to strike a chord with the consumers.

“One of the main reasons why VR is not booming into the consumer segment is because of the uncomfortable, clunky headsets — even early VR adopters have complained of mental fatigue due to prolonged use of VR headsets,” says Prabhu Ram, Head – Industry Intelligence Group (IIG), CMR.“Secondly, there is a clear dearth of quality VR content that one could watch,” he added.

Reports suggest that even as a relatively young technology, AR has shown more promise than VR as it involves adding visual elements to the real world typically via smartphones. Unlike VR, it does not push users into distinct virtual environments.

According to Delhi-based tech entrepreneur Tanuj Malhotra, who is working on his own VR startup called VRover, the technology is not going to come to life anytime soon.“It is impossible for VR to take off and compete with AR unless vendors make some serious changes from the consumers’ perspective,” said Malhotra.

“VR content out there is not readily available to consumers. Also, the VR technology is not able to rule out nausea and other health-related issues while experiencing it,” he added. According to Jack McCauley, one of the co-founders of Oculus, Facebook-acquired VR firm Oculus may not be profitable as the social networking giant is struggling to bring VR to the mainstream consumer market.

“There are a lot of fundamental issues that remain unresolved with VR gaming,” McCauley, who stayed through Facebook’s $2 billion acquisition of the company in March 2014, told CNBC. McCauley mentioned how people still get nauseated when they put on a VR headset and how they still prefer to play video games alongside their friends on a 2D display.

“Consumer interest in VR, while still in its infancy, will see slow and steady traction as specific use-cases, such as gaming, are pushed forth,” noted Ram.

IDC expects standalone and tethered headsets to drive the VR market growth.“Standalone VR headsets will capture 38.2 percent of the VR market in 2019, up from 26.6 percent in 2018. Tethered VR headsets will have a share of 46.1 percent this year, versus 44.1 percent last year. Finally, screen-less viewers will decline to 15.7 percent, down from 29.3 percent last year,” the IDC predicted.

Bridgekala Helps Young Minds Prepare for a Career in Design

Windows 11 is getting updated snipping tool, calculator, and mail apps