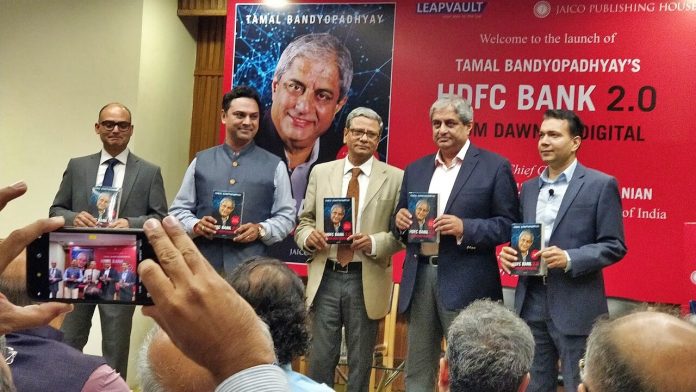 Tamal Bandhyopadhyay ‘tells the exciting tale of how HDFC Bank has transformed itself, especially in the past few years with its digital journey.’ The book goes to the inception stage and is brimming with anecdotes that are literally bubbling with a fervor that is both serious in intent and positively readable. The way we look at HDFC Bank today is that it effectively ‘combines global trends in technology like smartphones, AI, the cloud, etc. with the state-of-the-art infrastructure that India had built as digital public goods – Aadhaar, eKYC, Unified Payments Interface (UPI) and other elements of the India stacks. We know that its chatbot, the Electronic Virtual Assistant (EVA), now handles 6,00,000 queries a month and has completed 8.7 million interactions since its launch’ as Nandan Nilekani expresses in his foreword in the book.

Tamal’s first book ‘A bang for the buck’ was written in 2012 and HDFC 2.0 is being launched in 2019 which is also the 25th anniversary of the bank. HDFC Bank 2.0 – from dawn to digital written by Tamal Bandhyopadhyay reads like a thriller and a romance and yet maintains the seriously fact-filled stance of a work that has informative value for future generations who have an interest in fiscal intricacies.

The book has enthralling content and I must mention here Dr Krishnamurthy Subramanian (Chief Economic Advisor, GOI), Aditya Puri (MD, HDFC Bank), Mr. Rajnish Kumar (Chairman, SBI) and others from the banking and financial world, who were there at the launch, the words that conversed with the audience were a quaint concoction of actionable thoughts, humour, and a memorable recollection of incidents relevant to banking. For instance, Dr Subramanian mentioned that though bankers were conventionally assumed to be boring, ‘this joke is about a about a woman who approaches a banker, and says, “Are you single?” The banker responds by saying that it was not the inquiry counter’. Dr Subramanian also pointed out that ‘the lessons that are there in the book have relevance for the country as well as the banking sector, especially, you know, the importance of technology today. And that’s something that many of our banks can certainly learn.’

The transition from conventional or analog banking to one that was thoroughly soaked in the vibrant hues of new-age technological innovations obviously happened because of leadership who willingly listened to the whispers of the future. After all these whispers were all about somebody using a simpler process to give a loan faster, a simpler process at a lower cost for payment of money, a better process that walked the talk with telecommunications, computing, social mobility and artificial intelligence and primarily to make systems efficient.

The book goes way beyond being readable as it also diligently jots down every little story that finally sum up what HDFC represents. The stories span both the analog and the shift to technology years. The story of the lucky 13 being chosen in the initial stages and who were free to ‘bring their own people to the bank, people who would share the same dream and passion’ but these teams were not to be too large as ‘this would make it difficult for HDFC Bank to evolve its own culture’. The short but incisive snippets about Monday morning meetings to transform an abstract vision into actions that discernably moved ahead, all those training sessions under a tree to bring home the fact that visions of success do not get obfuscated by mundane obstacles, and the ways in which problems like ATM malfunctioning are simply as spell-binding as some of the others that have found their way into the heart of the narrative. Readers will love the way tequila shots in the evenings hobnob with chromosomal ideas revolving around spending less but spending smart to get a fair insight into the path that the bank had adopted. 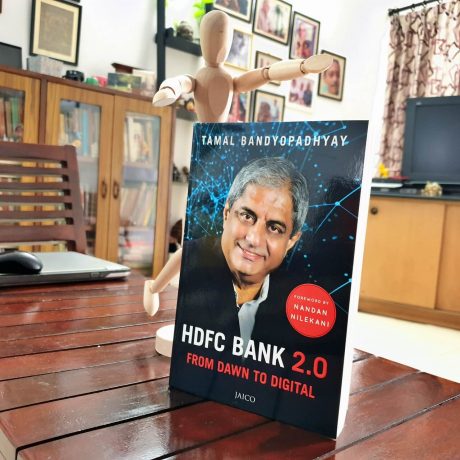 The financial wizards who had taken charge of raising this baby realized soon enough that they ‘couldn’t be a big bank dealing with only triple-A clients’ and thus began their march into the arena of retail banking franchise as this was the right way to create maximum value. The story, and I’m not really off the mark in using the word story here, of HDFC Bank begins and sticks to the primal concept of making banking simple and accessible to larger numbers and one of the mantras that gets mentioned often is the ability of their think-tank to sniff every opportunity. I wasn’t really surprised to find the author admitting that ‘HDFC Bank is staid and waits for opportunities but emerges a winner at the end of the day’. Success sans flamboyance forms the genetic code of HDFC Bank and even the foreword mentions that the bank is ‘monotonously predictable on most financial parameters’. After all, Aditya’s vision ‘was to create an Indian bank that could compete with the best on global parameters. India’s economic liberalization, he believed, would give the new bank a fantastic opportunity.’

The benefit of yearning to be able to compete with the best also means not becoming a dinosaur in the tech-savvy world of new-age banking. As Aditya said in the discussion during the launch of this book, ‘There’s no problem that cannot be solved with the help of technology. Technology can solve a problem. But you have to define what solution you want. So it’s not going to be the be all and end all.’ What matters most is staying ahead of the curve and ‘change what is necessary for the future’, for instance, HDFC had ‘foreseen the digital banking revolution and knew a convergence would happen and people would want everything on phone’. The way things are moving today it is ‘uninterrupted existence, proven track record, investment in advanced technology to understand customer behavior, the ability to invest in innovations and right platforms, and the willingness to partner with big players’ that is going to give consumers the right reasons to go on placing their trust in banking. Quite obviously then, the ‘next phase of growth will be driven by digital strategy’.

What comes through effectively in the book is the way change management was harnessed because the tenets of behavioral economics does mention that people have a lot of inertia and are resistant to change. It is thus the choice architecture that needs to be kept going at the right pace and in the right direction. The bank realized that digitization has a creatively catalytic impact on almost every aspect of banking, that data and technology can give enough information to make sane decisions, and yes, technology ensures that a larger geography can be reached.

This book has the heart of a novel and the mind of an information treasure. It is obviously a work of non-fiction that isn’t going to be dated ever as the author has chronicled facts connected to actions that have lead to where HDFC stands today. In more than one way, this book isn’t just about a bank but about banking and the way banking needs to anticipate the future and take critical decisions. And yes, banking is full of remarkable stories that can all come together to stitch an entire chapter in business strategy. This book tells me that banking isn’t boring at all.

TEDxKIET Women: An Idea to Recognize Your True-Self

Dipping a piece of goose feather in ink