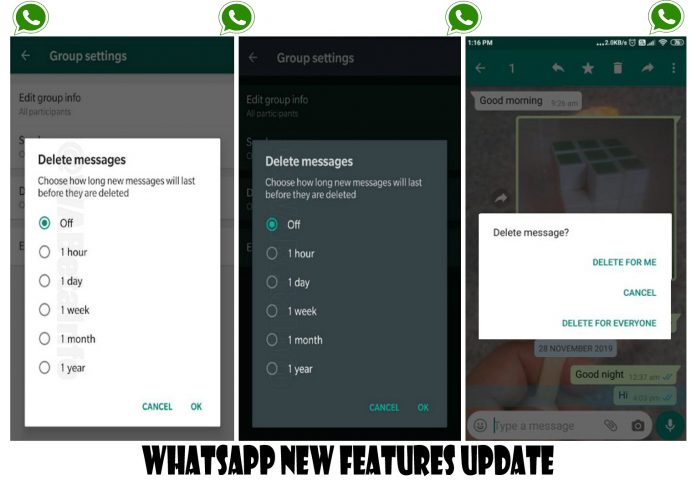 WhatsApp constantly keeps updating its software to include a slew of features to provide smooth messaging and call experience to its users. Some of the features are still under development while a few have been rolled out as stable updates for both Android and iOS users.

We bring to you some of the latest updates that were rolled out in Android Beta version this week:

Dark mode: Among all the features, the most anticipated Dark Mode update is still under development. However, the continuous roll-outs in the past weeks to enable a stable Dark Mode feature, suggest that it will be released anytime soon. According to WABetaInfo report, a blog that tracks WhatsApp developments, the Facebook-owned social messaging app is currently working on Battery Saver settings before enabling the Dark Theme. The update came in the Android Beta version 2.19.353.

WhatsApp is working on three options for activating the Dark Mode as spotted by the blog. The first option is the original light theme, the second option is essentially the dark theme and there is also a third option called ‘Set by Battery Saver’. All these options are still under development and it is perfectly fine if you don’t see any WhatsApp related updates on your phones yet. These options are being tested on Android Beta before the release of a stable version. Battery-saving option: The light and dark theme settings are self-explanatory and will incorporate the light and dark versions of the app. Elaborating on the ‘Set by Battery Saver’ option, the blog spotted that WhatsApp can automatically enable/disable the Dark Theme based on your Android device’s Battery Saver settings. This essentially means that the app would sense the phone’s battery saver settings and consequently turn the app darker when your phone’s battery drops below a certain percentage.

However, there is a catch to this update. As observed by the blog, this Set by Battery Saver option is only available to users having Android 9 and lower versions on their phone. The option is not available for Android 10 version users and instead, it would remain as the system default option on the phones running on the latest Android OS. This means that if your Android 10-powered phone is working in dark theme, WhatsApp will be run on your phone in the dark mode automatically without manually changing it. There would also be a light and dark call screen according to the users’ light, dark settings for the app. The update will naturally release only when WhatsApp releases the Dark Mode feature.

However, there is no official release date set for the Dark Mode update by WhatsApp yet, so sit tight until further announcement.

Self-destructing message feature: Although currently available on Android Beta version, this update will automatically delete a message after a particular period of time as set by the user.

Once available, the ‘Delete Message’ feature will come with a toggle on/off button and users can choose a particular time interval for the messages to automatically disappear. There are five options for time intervals to choose from – 1 hour, 1 day, 1 week, 1 month and 1 year. Accordingly, the messages sent to that chat will disappear. For instance, if the user opts for 1 hour time interval, the messages sent post-selection will be deleted after an hour. The feature is not a new feature in the app market. Other social apps such as Snapchat, Telegram already rolled out this feature quite a while back. In fact, WhatsApp is late in following suit.

China is about lose some of the biggest US tech giants’...

How to Fix a File Extension in Windows 10