White House has confirmed that US President Donald Trump will be attending and addressing the Houston rally ‘Howdy, Modi’ alongside PM Modi on September 22.

US President Donald Trump will be joining PM Narendra Modi at a mega event in Houston named  “Howdy, Modi!” . The September 22 event will be the first time a US president and Indian Prime Minister will be addressing a joint rally.

Amid speculation if Trump would join PM Narendra Modi at the Houston event, White House issued a statement to confirm that he would attend the rally. This is the third successive meeting between Trump and PM Modi within the span of a few weeks after the G20 and G7 summits.

More than 50,000 Indian-Americans from across the US have registered for the September 22 mega “Howdy, Modi! Shared Dreams, Bright Futures” event to be held at the sprawling  NRG Stadium in Houston.

“Howdy”, short for ‘How do you do?’, is a friendly greeting commonly used in southwestern United States and the event has been designed as a greeting to PM Modi.

In a statement, White House Press Secretary Stephanie Grisham said, “It (Modi-Trump joint rally) will be a great opportunity to emphasize the strong ties between the people of the United States and India, to reaffirm the strategic partnership between the world’s oldest and largest democracies, and to discuss ways to deepen their energy and trade relationship.”

This would also be the first time that an American president would be addressing thousands of Indian-Americans at one place in the US.

Indian ambassador to the US Harsh Vardhan Shringla called Trump’s participation in the “Howdy, Modi!” event “historic” and “unprecedented”.

“It is reflective of the strong bonds of friendship and cooperation that has developed between India and the US,” Shringla told PTI.

The event marks a huge endorsement of the efforts and success of the three million strong Indian-American diaspora and their contribution in all walks of life.

The event will also see participation from American leadership cutting across party lines. India Today TV has learnt that apart from Republican and Democratic Congressmen and Senators, House Majority Leader Steny Hoyer, the second-ranking member of the Democratic Leadership, is also going to address the ‘Howdy Modi’ event. This reflects the strong bipartisan support for India-US relations.

Trump’s attendance also demonstrates how Modi has been able to transcend the political divide in the USA and shares a great working relationship with both Barack Obama  and  Donald Trump . Other leaders around the world have not been able to make this transition as well as Narendra Modi has.

“This is unprecedented and historic and is reflective of the close ties of friendship and cooperation between India and the US,” the ambassador said, welcoming the White House announcement.

Trump when the two met in France last month on the sidelines of the G7 summit.

Trump, who enjoys a great chemistry and friendship with Modi, “immediately accepted” the invitation to join him in Houston and directed his officials and secret service, officials said.

In October 2016, Trump, then as Republican presidential nominee, had addressed a strong crowd of some 5,000 Indian-Americans in New Jersey, a few weeks away from his historic win in the November 2016 elections.

So far, Trump is the only presidential candidate to address the Indian-Americans solely during an election year. In his address, Trump had said that if elected, he would be the best friend of India in the White House.

The Houston event will be Modi’s third major address to the Indian-American community after he became the prime minister in 2014 and the first after his re-election in May.

The previous two were at the Madison Square Garden in New York in 2014 and the Silicon Valley in 2016. Both the events were attended by more than 20,000 people. 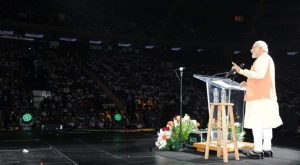 Prime Minister Modi will land in Houston on September 21. On September 22, Sunday, the PM would be addressing the ‘Howdy Modi’ event around 11am at the NRG stadium. He will also be attending an ‘energy roundtable’ with top business leaders from the energy sector in the US.

On September 23, Prime Minister Modi would attend the UNSG Climate Action Summit, which will be hosted by United Nations Secretary General Antonio Guterres. PM Modi will then address a gathering on how to tackle climate change and the efforts required from all sectors of society and governments. The emphasis of the summit will be to accelerate actions to implement the Paris Agreement on Climate Change.

The next day, on Tuesday, as the world commemorates Mahatma Gandhi’s 150th birth anniversary, Prime Minister Modi will host a special event in New York, ‘Leadership Matters: Relevance Of Gandhi in the Contemporary World’, at the Economic and Social Council (ECOSOC) Chamber at UN headquarters.

He will also attend an event of the Bill and Melinda Gates Foundation where he will be presented with the 2019 ‘Global Goalkeeper Award’ in recognition for his work in the Swachh Bharat Abhiyan. Prime Minister Modi is going to declare India an “Open Defecation Free” (ODF) nation on October 2 in India.

The Gates Foundation will be hosting the fourth annual Goalkeepers ‘Global Goals Awards’ on September 24.