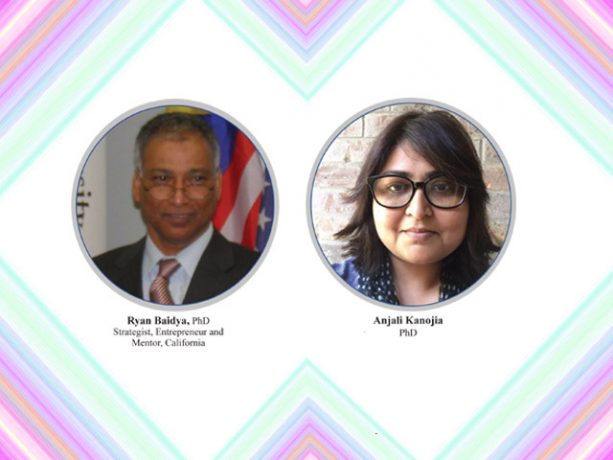 Tibet has flourished for centuries; it has been a living hub of ancient culture and spirituality, minding its own business, so to speak.  Tibet has made vast contributions to the world in terms of spiritual wealth and philosophy.  As parts of the Indian subcontinent were being invaded and the Hindu civilization was obliterated by the barbaric attackers, many seekers, gurus and spiritual masters took refuge in the safety and solitude of Tibet, allowing Hindu and Buddhist thought and literature to survive and flourish.  Thus, Tibet holds extreme importance to Indians as it denotes resilience and survival. 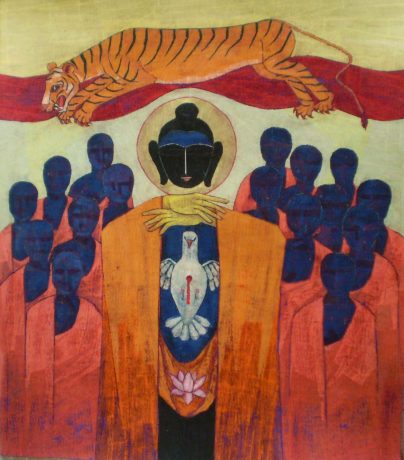 One usually thinks of the recent history of Buddhism arriving from India to Tibet.  However, the harmonious relationship between India and Tibet runs farther and deeper and predates the time of the Gautama Buddha.  Tibetan scholar Bu-ston wrote that the Tibetan race comes from the descendants of the Military General – Rupati – a general from the Kaurava army from the times of the Mahabharata.  Tibetan chronicles documents that Rupati went to Tibet after the Kauravas were defeated by the Pandava army after the epic battle of Mahabharata ended and Rupati was followed by a large number of his consignment into Tibet.

India in a sense can be considered as a mother, which gave birth to the beautiful culture of Tibet where the same stream of consciousness flows between the two entities.

The roots of Tibet are Indian, and this continued with the advent of Buddhism in Tibet and noble Buddhist thought and philosophy influenced the people and the way of life for the region of Tibet.  Two Tibetan kings – Songtsen Gampo and Trisong-Detsen played a vital role in history by introducing Buddhism to their praja (citizens) in the 7th and 8th century.  This influence is still practiced and observed in the rituals, art, literature, poetry and day-to-day lives of the beautiful Tibetan people.

This historic border between India and Tibet was called the Indo-Tibetan border and China (Sino) had no mention in defining that border.  Tibetan history shows that Tibetan powerful rulers in the 7th century invaded parts of China, and the annexed Chinese territory was even paying taxes or tribute according to a treaty (Treaty of 821 A.D.) between the Tibetan king Tsenpo and the Chinese Emperor Hwang citing “neighborly contentment,” and “establishing a great era when Tibetans shall be happy in Tibet and Chinese shall be happy in China, shall never be changed.”   The Chinese forces violated the 821 A.D. bilateral treaty by continuously invading Tibet over the centuries.

Tibetans have lost most of their Central Asian possessions to the Chinese and the great Tibetan Empire all but vanished by the 9th century due to Chinese and Mongol invasions.

The British signed the Lhasa Convention with the Government of Tibet after their expedition and this denotes Tibet’s sovereignty.  It should be noted that China is nowhere in the picture and all official business was conducted with the government of Tibet. 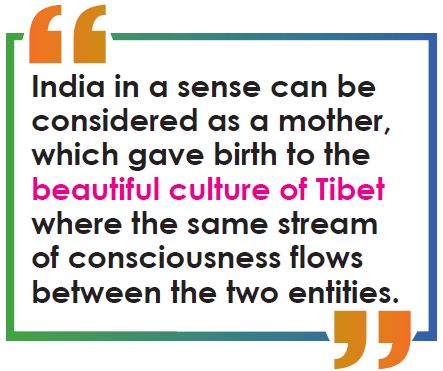 Mongolia and Tibet had a formal, bilateral treaty in 1913 where the two nations maintained recognition and Mongolia had kept an Ambassador in the Tibetan capital – Lhasa.  In 1913-1914, the representatives of British India, Tibet and China met in Shimla and settled the political status of Tibet and defined Tibet’s relations with China.  British-ruled India and Tibet signed an Indo-Tibet border treaty establishing the McMahon Line, which mainly defined the eastern Himalayan international borderline at the Shimla Convention.  However, the Shimla Convention failed to meet the goals it set out to accomplish.

Neighboring Nepal, in 1949 applied for the United Nations membership and formally stated that the Tibetan nation had independent, diplomatic relations with the United Kingdom, India, Burma, the United States of America and Tibet.  This clearly shows Tibet as an independent entity.

The Chinese again invaded Tibet in 1949.  India’s foreign office responded to the violation (of 821-treaty) on October 26, 1950 as:  “In the context of world events, invasion by Chinese troops of Tibet cannot but be regarded as deplorable and in the considered judgment of the Government of India, not in the interest of China or peace”.

When India became independent of the British in 1947, the Government of India sent the following note recognizing the Tibetan government:  “The Government of India would be glad to have an assurance that it is the intention of the Tibetan government to continue relations on the existing basis until new arrangements are reached that either party may wish to take up. This is the procedure adopted by all other countries with which India has inherited treaty relations from His Majesty’s Government”.

After the fall of the Manchus in 1911, China offered both Nepal and Tibet to join China and both the nations refused.  China clearly recognized each of these nations as being sovereign entities up till this moment of time.  During World War II, Tibet continuously maintained neutrality and did not allow passage of any troops through its territory.  Even Mao Zedong acknowledged the independent status of Tibet in year 1938 when traveling through the Tibet-China border regions and said that “This is our only foreign debt, and some day we must pay — the Tibetans for the provisions we received from them”. 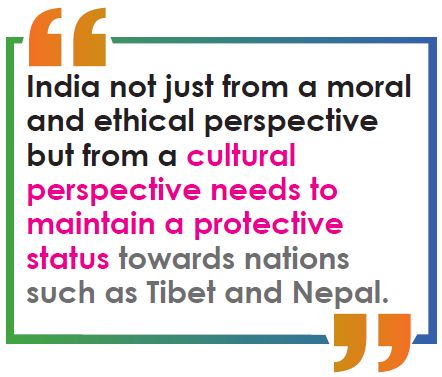 Soon after the failure of the Shimla Convention where China refused to sign the treaty, Mao Zedong declared a liberation plan for Tibet and began claiming that Tibet has always been a part of China.  The Indian Prime Minister – Jawaharlal Nehru for the first time recognized China’s claim over Tibet and signed the Panchsheel Treaty in 1954 acknowledging the same.

Nehru’s ill thought faux pas set a dangerous precedent in history which affects the relationship between  India and Tibet as well as other foreign policy decisions.

On June 23, 2003, while visiting China, in a joint declaration signed by then Indian Prime Minister Atal Bihari Vajpayee and Chinese Premier Wen Jiabao, for the first-time recognized Tibet as a part of China.  However, soon after the declaration, China repeatedly violated this declaration and Panchsheel accord by substance and spirit.  China’s aggression has continued even today with increased vigor and voracity.

India had enough and India has begun to ‘Right’ the ‘Wrong’.  In 2014, when Mr. Narendra D. Modi got elected by an unprecedented mandate by the citizens of India, Mr. Modi invited the head of the exiled government of Tibet to his swearing-in ceremony.

More than 1.2 million Tibetans have died as a result of China’s occupation of Tibet.  The culture and people have been systemically destroyed and redirected resources that put Tibetans in a terrible position for survival.  China indiscriminately diverted water from the multinational rivers which originate in Tibet thereby putting the lives and well-being of billions of people at risk.

India not just from a moral and ethical perspective but from a cultural perspective needs to maintain a protective status towards nations such as Tibet and Nepal and it is in everyone’s mutual interest that their sovereignty remain intact and protected from the neighboring Communist dreams and agendas.

Given the recent issues between India and China over land grabbing, India needs to firm up its policies towards all its neighboring nations, especially Tibet.  Nations often declare treaties to be moot, and it is time for India to declare that it will no longer recognize the Panchsheel Treaty of 1954 to be valid.  India has no choice but to rescind its reluctant recognition of Tibet as a part of China, and formally re-recognize Tibet as a sovereign nation.

Why are VR headsets said to be failed technology, when it comes to wooing the masses