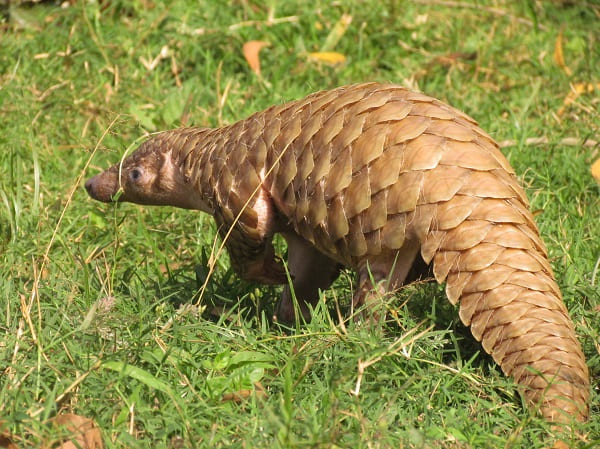 The pangolins have roamed this earth for nearly 8 million years now. It is about the size of a house cat and covered in scales from head to tail, making these creatures among the most unique species living on this planet. Mostly out in the night, they live on small insects, mainly ants and termites. They go on minding their own business and when they come across a predator, like lions, tigers or leopards, they just coil into a ball, with their hard scales acting as a shield to protect their tender underside. But that defense mechanism hasn’t worked against humans.

Over the past decade, more than 1 million pangolins have been poached, and that’s just the number of reported cases. The trade of pangolin is so massive that we don’t really have an estimate of their numbers in the wild. We can however, comfortably say that their numbers have been fast declining, making it among the most threatened species on this planet today. The IUCN (International Union for Conservation of Nature) lists the Indian Pangolin (Manis crassicaudata) as a Red List species and the Indian Wildlife Protection Act (1972) puts it in the Category 1 of protection. Yet, the pangolin is now known for being the “Most Trafficked” mammal on earth.

Across the globe there are 8 different types of Pangolins – Chinese Pangolin (Manis pentadactyla), Palawan Pangolin (Manis culionensis), Temminick’s Ground Pangolin (Smutsia temminckii), Sunda Pangolin (Manis javanica), Indian Pangolin (Manis crassicaudata), White-bellied Pangolin (Phataginus tricuspis), Black-bellied Pangolin (Phataginus tetradactyle) and the Giant Ground Pangolin (Smutsia gigantea). Covered in big overlapping scales, it’s the only means of defense for the animal. The pangolin has evolved to live on a diet of small insects. In the wild, you will see it hunting near termite mounts, using its ‘larger than body’ tongue, to slurp up ants from below the surface. Though the animal has a set of four legs, it predominantly walks on its hind pairs, making it look like a dwarf dinosaur! They don’t really chew their food (don’t have teeth either) but digest in their stomach by grinding. Largely solitary, they will only get close to one another to find and mate, reproduce or raise their young. In most cases, pangolins will only give birth to a single offspring and the gestation period is between 140 and 300 days, depending on the species. Also, they are pretty good swimmers and will move between forest patches in search of food. 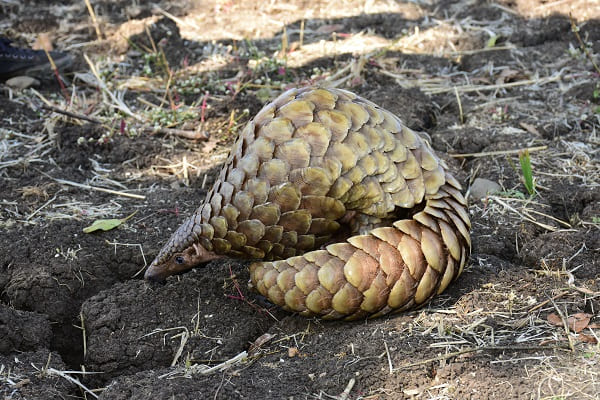 The desire to kill

The most interesting aspect of the animal is however their scales. That’s what make their look so exotic and out of the world. That’s what they are getting hunted and killed for. The market for pangolin scales lies mainly in China, where users believe it to have medicinal properties. They use it as an aphrodisiac in their stews but technically, the scales are nothing but keratin, the same material that our fingernails are made of! Roasted and ground scales are also believed to stimulate lactation, improve blood circulation, heal menstrual problems, and sometime even cure cancer. However, there is no scientific proof behind any of these claims. It is just superstition that makes a whole species so vulnerable and on the brink of extinction. Along with the scales, the pangolin meat is also a delicacy among high-paying customers. The meat is worth about $600 per kilogram and believe me, there are pretty many people willing to pay for it.

The superstition and the global market serves the needs of the pangolin hunters. It’s a whole network of people, right from the tribal in the forest to the trader, the smuggler and the restaurant industry. A single catch of pangolin will bring enough money for a tribal family for a whole week.

Pangolin hunters, mostly locals, will set off in the morning with only a gunny bag and will sometimes be accompanied by a well trained dog. Being forest dwellers, they know where to search and once an animal is located, they are easy to catch. Sometimes the pangolin lashes about trying to break free from the human hands but most times, it’s just an act of picking up the innocent animal and putting it into the bag. Once, the hunter gets home, he will slice up the neck of the animal with a sharp blade and the exploit is ready to be harvested. To get out the scales off the animal, the pangolin is sometimes boiled whole. This loosens the scales off the skin. The meat will either be eaten by the family or sold to the trader who will put it in the freezer and send off to the restaurant. The scales are weighed on site and paid for by the trader to the hunter. Making money off pangolins is as easy as picking up mangoes from the tree!

According to a publication by Rajesh Kumar Mohapatra, Sudarsan Panda, Manoj V. Nair, Lakshmi Narayan Acharjyo and Daniel W.S. Challender, in the Indian context, “Pangolins are caught when sighted or are dug out of their burrows using different techniques including smoking the animals out and pushing them out with water; pitfall traps and hunting with dogs are also reported to be used to hunt and trap pangolins. The animals are then killed by being placed in boiling water or with the use of a club to render them unconscious. The scales are then typically removed by skinning the dead animal or   peeling off the scales.”

Further, “there have also been reports of the involvement of tribal communities such as Padhis, Saperas, Bawarias and Mongias in the capture of pangolins (Sharma, 2014). Pangolin scales were reported to be sold for Rs1000/kg in Mizoram in 1996 and increased to Rs12000–13000/kg in different parts of Mizoram in 2013. Despite the apparent decline in the volume of scales seized, trade is nevertheless persistent and can be attributed to high demand from China primarily, where scales are used in traditional medicines, and to increasing prices, which are driving the illegal trade in pangolins from South Asia, as well as from Africa and South-east Asia.”

The trade of pangolin makes up for nearly 20% of all the illegal wildlife trade across the globe today. It’s not just the Chinese who are on the lookout, but people in Africa too believe the scales to have spiritual and medical properties. It’s the same kind of story across the world. In fact, pangolin scales were insured under health plants in Vietnam!

Some people even fashion coats made out of pangolin scales. The Royal Armories in Leeds in fact exhibits a coat made out of the scales of the Indian Pangolin that was gifted to King George III, back in 1820. Consequently, the problem is not new. In the black market of Asia, one kilogram of cleaned and roasted scales can fetch up to $3000.

Other than the meat and scales, pangolins also give rise to other exotic (but illegal) products like the pangolin wine. To make the wine, a baby pangolin is boiled with rice wine. The wine is again believed to heal skin diseases and help patients suffering from asthma. Also, pangolin blood too is drunk raw for its supposedly medicinal value. No part of the pangolin goes to waste, but just the animal – all to get healthier.

Governments across the globe have been initiating a variety of efforts to curb the illegal killing of the pangolin. We have organizations like the IUCN, WWF and the CITES working across the globe to address the trade as a global problem. Even local wildlife NGOs have been working together to address the supply side of the problem. However, until and unless, the demand is stopped, this animal will continue getting picked up and boiled. Though legal measures across countries ensure high degree of punishment for pangolin trade, it continues to happen. The only possible way out is perhaps a global awareness, particularly targeting the Asian countries that pay for pangolin products. It is only when the demand stops that the supply will. Hunting will still exist to suffice the traditional bush meat needs of locals but the expanse of the problem will be then manageable.