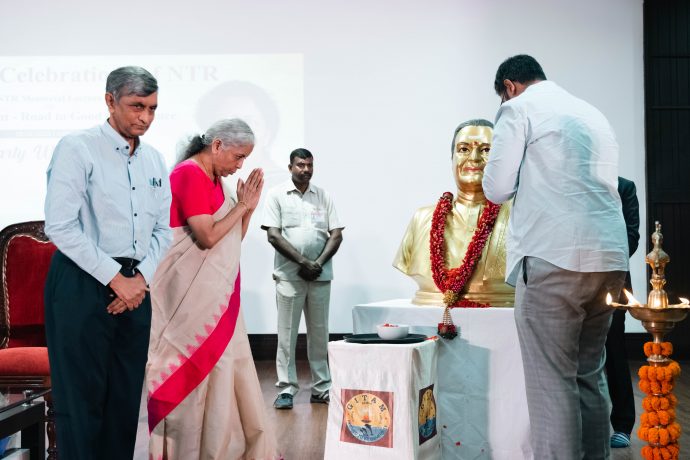 Good governance is about looking for instruments with which you can implement the objectives, said the FM while addressing students and guests at GITAM

Visakhapatnam, October 29, 2022: Technology has come as a very big instrument through which human folly and human temptation can be contained in governance, said Hon’ble Union Minister for Finance & Corporate Affairs Nirmala Sitharaman while delivering the NTR Memorial Lecture on ‘Empowerment – Road to Good Governance’, marking the centenary celebrations of NT Rama Rao – actor, politician and former Andhra Pradesh Chief Minister popularly known as NTR. The Hon’ble FM attended the event as the chief guest at the Visakhapatnam campus of GITAM (Deemed to be University).

“A former Prime Minister lamented that if I send a rupee down to the people, only 15 paisa reach them. What Prime Minister Modi has done is, by adopting technology he has contained the leaky bucket process. There are no leaks, the beneficiary who must get that money gets it. Not 15 paisa to a rupee, but one rupee to a rupee. Technology has come as a very big Instrument through which otherwise the human folly and the human temptation is contained. The human tendency to take something out which probably does not belong rightfully to one, is there, one cannot bypass that. Today, the way we have adopted technology is ensuring that benefits reach common public, one of the goals of good governance has been achieved.

“I am not saying this is fool proof. Ingenuity will have some element in which people will know to hack even this, but now it is for sure that who should get what, is going absolutely without any kind of pilferages. Good governance is about looking for instruments with which you are able to implement the objectives,” she said.

“I pay my humble respects to a leader who’d be 100 had he lived today, and to his family. I feel touched that in a yearlong celebration, I’ve been given a small role to play. Whether it is Rama or Krishna, until modern day there is nobody else who can bring that image so perfectly than NT Rama Rao. The films had a very good blend of authentic references to the Puranas. There were no fabrications, and the acting was just incomparable,” said the Hon’ble FM while paying her respects to NTR. She added, “Today when we talk about good governance, you have so much to speak about the time when NT Rama Rao was the chief minister of Andhra Pradesh.”

Hon’ble FM Nirmala Sitharaman also invoked the messaging of ‘Minimum Government, Maximum Governance’, and said there should be adequate presence of a government where required, and no more. She added that building trust in people is crucial for good governance.

The event was presided by Daggubati Purandeswari, National General Secretary, BJP, and the daughter of NT Rama Rao. She spoke about her father NT Rama Rao and his welfare schemes. She mentioned that most of NTR’s schemes were later followed by the Central government. She added that they are planning to conduct year-long programs as part of NTR centenary celebrations.

Speaking on the occasion, Jaya Prakash Narayana, Founder, Loksatta, said, “In the midst of an extraordinary crisis, bucking the trend, against enormous pressure from the so-called scholars, experts and intellectuals, the union government and the finance minister did a remarkable job in the fiscal management of a country of India’s complexity and magnitude. If you did not do that, and instead intimidated the countries that that went on a certain path, we simply would not have the growth dividend today. If India can genuinely contemplate a 7+ per cent growth rate for the next 20-30 years, it is because in a critical moment when you an easy path could have been taken, you gave us a chance, and at the same time, took care of the people. In governance, you must take care of the immediate (needs) but also balance it with long-term growth.”

Starting by remembering the extraordinary life of NTR, Madan M. Pillutla, Dean, Indian School of Business, Hyderabad delved into the literature on good governance. He said, “Governance means trying to make the best use of resources, and shepherd the resources in a way that you can get the best possible outcome. Ultimately whether a society chooses to provide opportunities to the poor, vulnerable, is the moral choice. It’s not an economic one. It is a moral choice.” Referring to the book ‘Why Nations Fail’ by Daron Acemoglu and James A. Robinson; he mentions how there is a natural ceiling on growth for countries that don’t attempt to grow for all. “While I say this is a moral claim, there might even be an economic basis to why we need to be thinking about growth about all.”

Among the dignitaries present were Mathukumilli Sri Bharat, President, GITAM (Deemed to be University) and sons, daughters, daughters-in-law, and grandchildren of NT Rama Rao. K. Niveditha, the granddaughter of NT Rama Rao, delivered the vote of thanks. The NTR Centenary Celebrations concluded with the felicitation of three social workers.