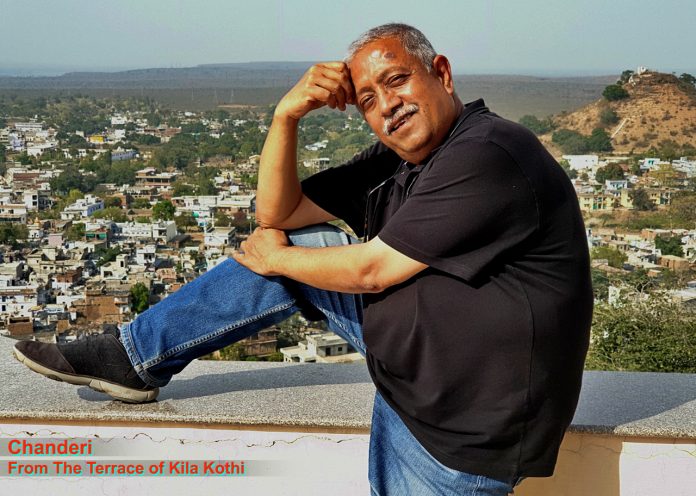 any travel enthusiasts know of Chanderi cloth but may not be aware that 1 km of silk used in this 20 to 22 DN fabric weighs just 1.5 gm and that 190 gm is the general weight of a sari. Chanderi isn’t just about hand-woven silk cotton and pure silk extracted from the roots of Kolikanda and which is as fine as 300 counts and competes with the muslins of Dhaka. The charm of this place does not end with fabric that has traditional motifs inspired by floral patterns, fruits, peacocks, coins, heavenly bodies, and abstract geometric doodles that weave gold, silver, and copper threads with cotton and silk ones that we know zari weaves. The shooting of ‘Stree’ was done here, and because of the large number of water reservoirs here, the township is also known as ‘jheelon ki nagri’. All this and a treasure-chest full of historical tales that take us on a long ride through the centuries make a visit to Chanderi absolutely awe-inspiring.

Chanderi – A bit about its location and history

Chanderi town is located in Ashoknagar District of Madhya Pradesh on the borders of Bundelkhand & Malwa and is at a distance of 127 km from Shivpuri, 37 km from Lalitpur, 55 km from Ashok Nagar, and about 46 km from Isagarh. This place has existed since the 11th century and has an abundance of hills, lakes, and forts surrounding it that include the great Jain monuments, famous trikal choubisi, Khandarji, and their fascinating culture, Kati Ghati and its gory tale, lots of baolis, and vital links with the Malwa Sultans and Bundela Rajputs who ruled the region in 15th and 16th century.

This bustling township still retains quite a few of its water bodies and still has 21 reservoirs. However, it is said that at one time the place had 1200 baolis, despite the fact that this place is not located on the banks of a river though Baburnama mentions ‘a small river, Betwa, at a distance of about 3 kurohs (6 miles)‘. So far as the baolis are concerned, a few like the Chakla baoli, Battisi baoli and Moosa baoli can still be found here… and historical records show that they were built because Chanderi was an administrative center for its rulers. This is one township where rainwater harvesting and care for water levels has existed for centuries and not just decades.

The restored fort and the mahals here and even those parts that still have ruin written all over them go back to the 7th descendent of Pratihara dynasty, Raja Kirtipal who founded Chanderi city in the 10th -11th century AD and made it his capital. After the fall of Pratihara dynasty, the Chandelas of Jejak bhukti reigned briefly. This place was buffeted by the invading Mahmood Ghaznavi in the 11th century AD and then came the Delhi Sultanate, the marauding Turks and Afghans and the mighty Mughals until Daulatrao Scindia of Gwalior sent General John Baptiste to attack Chanderi and bring an end to the rule of Bundela ruler Morprahalad. The last Bundela ruler of Chanderi Raja Mardan Singh is linked to the 1857-58 freedom struggle. Obviously then, with so many invading armies walking through this place, it didn’t come as a surprise to see they have a Khooni Darwaaza here as well.

Chanderi is full of stories

The hill fort or Kirtti Durg

This fort towers 71 metres over the township and has an area of around 5 km and parts of it have been restored. The view from the top is fairly revealing and it is easy to understand why Abu Fazal, the court historian for Akbar wrote about Chanderi having 14,000 housing units, 612 mahals, 384 bazaars, and 1200 masjids in the entire area. The stones here have obviously witnessed everything from romantic interludes to bloodbaths… and its stories begin in the 11th century during the rule of Kirttipala, a Pratihara king – the reason why one of its names is Kirtti durg.

The Khiljis, Tuglaks, Lodhis, Scindias, Bundelas, Mughals, and even the British have ruled this place and some of these rulers have been merciless in their attacks and plunders. Among its 3 entrance gates are the Hawa Por on the top, Khooni Darwaaza at the lower end and Kati Ghati towards the south, and the last two have interesting tales connected to them.

The Johar Smarak on the periphery at the top is the site where Rajput women committed johar and the ornate dome of Sati Devi here is still paid obeisance by local women.

The blood tale of Khooni Darwaaza

Some call it the massacre of 1528, the year Babur attacked Chanderi and finally triumphed on the 28th of January. It was during this battle that a lot of blood flowed at the fierce fight near this gate. This is also the western entrance to the fort and it is here that the valiant Rajput soldiers of Maharaja Medni Rai were butchered and their blood flowed right up to this gate. The place is around 100 meters away from the mahal.

Kati Ghati gate and the suicide of a mason

A marvel of workmanship, this gate is 80 feet high and 39 feet wide and stands 230 feet above ground level… but the surprising feature is that it is cut out on a single rock face. The Kati Ghati gate links Bundelkhund and Malwa and the story is from the time when Jiman Khan, the son of Sher Khan – the then Governor of Chanderi, wanted a gateway cut into the towering rockface. Now imagine one mason bravely volunteering to do the job in record time.

‘You? Will you be able to do this? In one night?’ shouted Jiman Khan.

The mason nodded a yes and waited.

‘Fine. One night. One gateway. And a handsome reward for you for a lifetime.’

The next day when Jiman Khan reached the site to inspect he murmured, ‘A miracle! Ghiya-ud-din Khilji, the Sultan of Malwa will be pleased.’ It was then that he noticed that the mason had overlooked to carve out hinges on the cut rock and it was impossible to fix doors. A gateway without doors! The mason was humiliated for his error and the poor fellow was so saddened by this reversal that he committed suicide at the site.

The inscription in Devnagri and Nashq scripts here are from 1480 and so is the grave of that mason who volunteered to complete this herculean task in a single night. Well, there is another story about Babur being obstructed by this massive rockface as he marched towards Chanderi and it was on his orders that a gateway was cut.

There is a lot more to see and do in Chanderi

The Jama Masjid has an open inner courtyard of 31.42 x 24.38 meters and enough space for seating 2000 devotees. It was constructed during the reign of Ghiyas-ud-din Balban to commemorate his victory over Chanderi. This mosque is unique as it does not have a minar but three white marble domes instead… and is opposite the Badal mahal Darwaza.

Badal Mahal Darwaza was built during the reign of Sultan Mahmud Shah Khilji and has arches with intricate designs reflecting Mughal architecture. There is a hidden underground palace discovered by the archeologists and the compound surrounding the gate has a charming garden. This iconic monument can be found on the Chanderi postal seal… and as an official website on the township informs, even the MP Handloom Department stamps hand-woven sarees with the Badal Mahal seal.

The Chanderi museum at the intersection of Mungaoli and Isagarh has sculptures and stone carvings, ancient artefacts and stone coins, and even a collection of old weaponry, and a lot can be learned about the culture of Chanderi. There is a Vishnu gallery having sculptures of all incarnations of God and there is another gallery dedicated to Jain mythology. Most of the artefacts have been brought from Boodhi Chanderi and Thubon.

A bit more about the Chanderi weavers

The history of Chanderi silk goes back to the 7th century BC and this hand-spun wonder was the favourite of the royalty then. There is a story that hints at Shishupal, Lord Krishna’s cousin, having initiated this art during the vedic era. At the start of the twentieth century, weavers here switched from hand-spun cotton to mill-made cotton as the craft had a low phase around 1920 because mill-produced yarn was cheaper. Over the years the quality went further down when Japanese silk was introduced in the warp and cotton was retained in the weft of the Chanderi sari.

At some critical stage it was the intervention of the Scindias of Gwalior that encouraged the adoption of gold motifs and new designs that revived interest in the fabric being made here. 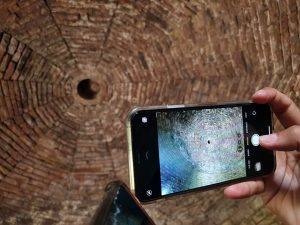 Such royal patronage obviously increased the repertoire of motifs used here and now we see ashrafi or gold coin, churi, bundi, keri, phul-patti, phul-buta, akhrot, paan, eent, suraj buti, meena buti, kalgi and ghoongra besides other geometrical patterns and the ones that were traditionally being used. Chanderi bunkars now have their own handloom park where they have work-space allocated to them, and enough space to function as sales counters.

It is fascinating to watch at least a part of the entire process that goes into the making of a Chanderi sari and going from one building to another one comes across tens of looms busy with their own specialized designs. Some media reports have called this place the fortress of rustic sophistication… and when this is converged with the cultural gems here, the total experience is heady and enough to last a life-time.

Is REDDIT on the path of becoming the next big thing in Social media...