Scientists have revealed the latest topographical map of Antarctica, which has been 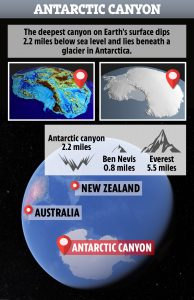 developed by the BedMachine project, reported the Mashable. BedMachine is a new map of the Antarctic  ice sheet believed to be of high precision.

University of California, Irvene, on its official Twitter handle said, “A team of UCI #glaciologists has unveiled the most accurate portrait yet of the contours of the land beneath Antarctica’s ice sheet: New findings will help scientists predict climate change impact on frozen continent.”

As per the previous studies canyon was believed to be shallow, but the new study has uncovered its real depth. Scientists came to know the depth of the hidden canyon by calculating the amount of ice that filled it and the law of conservation of mass.

“Ultimately, BedMachine Antarctica presents a mixed picture: Ice streams in some areas are relatively well-protected by their underlying ground features, while others on retrograde beds are shown to be more at risk from potential marine ice sheet instability,” said Mathieu Morlighem of the California university, the report added.