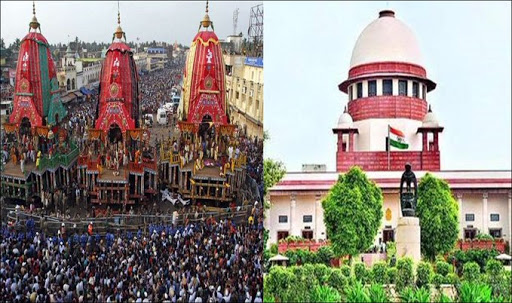 NEW DELHI: Four days after stalling rath yatras across Odisha, the Supreme Court on Monday made an exception for the world famous chariot festival in Puri but ordered that it would be held under curfew with strict adherence to health guidelines and each of the three chariots would be pulled by a maximum of 500 people who have tested negative for Covid-19.

The first attempt to get the injunction on the rath yatra lifted was made on Monday morning by solicitor general Tushar Mehta who sought an urgent hearing before a vacation bench of Justices Arun Mishra and Sajiv Khanna on applications seeking modification of the SC’s June 18 order. Support of Odisha government’s counsel Harish Salve, who had agreed with PIL petitioner ‘Odisha Vikash Parishad’ on June 18 leading to the SC stalling the rath yatra, came handy.

Things moved fast and a three-judge bench of CJI S A Bobde, who was in Nagpur, and Justices Dinesh Maheshwari and A S Bopanna was assembled hurriedly. Mehta said the Jagannath temple trust headed by the Puri king and the Odisha government had agreed to hold the rath yatra under strict supervision and without participation of devotees. “Let the rath yatra and associated rituals, observed without a break for centuries, be allowed to be performed only by priests and sevayats,” Mehta requested.

The bench took note of the Naveen Patnaik government’s U-turn and said, “Before we passed our June 18 order, we had suggested to the parties that the rath yatra could be allowed to proceed without the general congregation annually associated with it. But we were informed that it would be well nigh impossible to ensure that there is no congregation. This court was, therefore, left with no option but to grant an injunction restraining the rath yatra itself.”

With the Odisha government agreeing to conduct the rath yatra in a limited way as per the action plan suggested by Jagannath Temple Administration Committee chairman Gajapati Maharaj of Puri, the bench did not feel necessary to accept Mehta’s suggestion to involve the Shankaracharya of Puri in supervision of the rath yatra. The court was also persuaded to permit the rath yatra in view of the state’s good record in managing the pandemic.

However, it reminded the state government of the spread of cholera and plague in the 18th-19th century due to rath yatra and asked it to be extra vigilant and strict with implementation of health guidelines.

When the SG, arguing for the Shankaracharya’s participation, pointed out that the Odisha government had initially objected, the CJI said, “Even the Shankaracharya had welcomed our decision on June 18, now he is opposing.” The CJI also said the judges had received threats after the order stalling the rath yatra.

The bench said, “We take note of the fact that the state of Odisha has a good record of having controlled the pandemic with very little loss of life. We see no reason why the same attitude of care and caution should not be applied to the rath yatra. The state government may take such help as may be found necessary from the Union government.”

It asked the state government to maintain a record of all those allowed to participate in the rath yatra or its rituals along with details of their medical condition after testing.

The bench ordered the following conditions for the rath yatra:

* All entry points into Puri, ie, airports, railway stations, bus stands etc, shall be closed during the period of rath yatra

* The state government shall impose a curfew in Puri on all the days and during all the time when rath yatra chariots are taken in procession. During the curfew, no one will be allowed to come out of their houses or their places of residence, such as hotels, lodging houses etc. The curfew began at 8pm on Monday

* Five hundred people per chariot shall include officials and police personnel and there shall be an interval of one hour between (pulling of any) two chariots. All involved will maintain social distancing at all times

* Primary responsibility for conducting the rath yatra in accordance with the conditions and other norms shall be of the committee in-charge of Puri Jagannath Temple Administration. In addition, officers designated by the state government for conduct of the rath yatra shall be responsible likewise

* Bare minimum number of people shall be allowed by the committee to participate in the rituals and in the rath yatra.