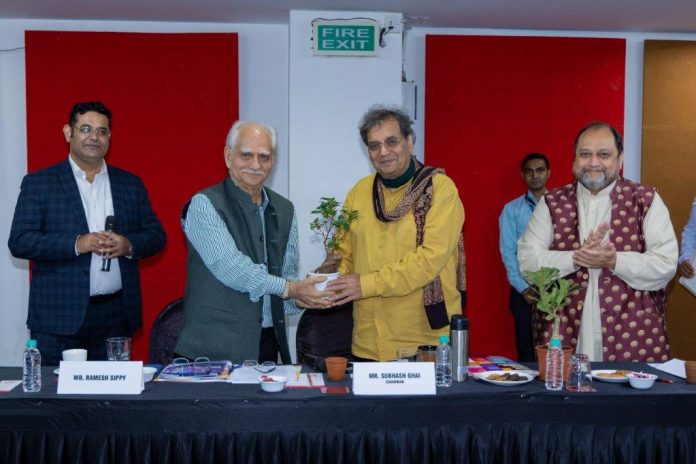 New Delhi: Media and Entertainment Skills Council (MESC) announced the appointment of Sholay fame Shri Ramesh Sippy as its new Chairman. The appointment was announced during the Governing council meeting held at Mumbai. He will be responsible for overseeing the operations of MESC and work closely with its governing Council on strategic issues related to the growth of the Media & Entertainment industry and its skill ecosystem in India.

Newly appointed chairman, Shri Ramesh Sippy said: “Media & Entertainment Industry is growing at an exponential rate for all the sub sectors of the industry including OTT, Gaming, Animation & VFx etc. Our focus is to create entrepreneurs and skilled resources to take the Indian M&E industry to global standards”.

“As I learnt that MESC has developed 100 Qualifications across 12 Sub-Sectors, where the training programs would be focused on outcome; offering opportunities for candidates to work on live projects which will make them readily deployable as per the requirement of the industry. MESC has developed a path that helps individuals to get trained and certified in appropriate skills leading to employment opportunities in collaboration with industry” he added.

Ramesh Sippy has been actively supporting the various initiatives to strengthen the industry from very early stages and has later been instrumental in setting up world-class training facility under Ramesh Sippy Academy of Cinema and Entertainment (RSACE). He has held leadership positions like President, Film & Television Producers Guild of India, Co-Chairman, Media & Entertainment Division, FICCI and Chairperson, NFDC. He was a co-founder of MAMI the Mumbai Academy of Moving Images and worked with them for over 15 years. He has served on several juries and chaired the national film awards in 2010 and 2016. He also serves on the advisory board of the International Indian Film Academy (IIFA).

Mohit Soni, CEO, MESC said: “Besides being a highly acclaimed film director and producer, he is a gifted storyteller and a master craftsman. He introduced Indian cinema to many new filmmaking technologies, including 70mm and stereophonic sound. He became a household name for millions across the globe.”

“With a seasoned person of the calibre of Mr Ramesh Sippy as the leader, the skilling up process will be further accelerated. He epitomizes core values of a successful leader – strength, innovation, ingenuity, knowledge, and foresight – values that are imperative to the success of any development initiative in today’s M&E sector. His vast experience will take MESC to greater heights,” he added.

The paradox of being a common man

China is about lose some of the biggest US tech giants’...