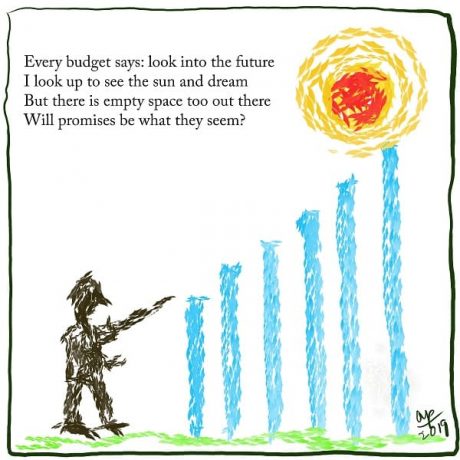 There will be hundreds of seriously analytical articles carefully torn from newspapers and rolled into cones to sell salted peanuts on every street all over the country… so one can safely say that even the written word in India is a job creator. The budget, of course, sings mellifluously about promoting just this in place of being whining job seekers forever.

Post budget period is always a delight and Specky, my wife, summed it up rather well when she said, “It is rofl time for all.” I guess it is because if we have Manoj Tiwari shouting about the realization of “the farmers, youth, women, and poor people” we have other equally vociferous utterings saying just the opposite. Just open any newspaper and you’ll know what a battlefield looks like. The post-budget period is indeed ROFL time the moment the opposition leaders begin commenting.

As a common man I am completely submerged in decibels that mix-n-matches capital gains with step-motherly treatment, and terms like relaxations and reliefs begin to hobnob with bitter pills, duty hikes, and tax cuts with Mr Modi nudging in words that sound like “hope”. Derek O’Brien of TMC said that “the government is still only selling dreams and not delivering. Far from a dream, it’s a nightmare for common people who are suffering.” Well, I’ve seen so many budgets in the past and most of them are doing just this. Like every other budget, what matters most is how speedily and surely well-meant pronouncements are going to move in the real world of mounting economic stress after both bouquets and brickbats have lived their ephemeral lives.

With so much hot air breathed by the opposition leaders on a mere budget speech, I’m not surprised that cool air is no longer going to be as affordable as it was in the past. Sitaram Yechury of CPM went on and on about every kind of distress from agrarian to infrastructure to investment and he breathed so much fire only to ask for debt-relief! P Chidambaram from INC was amazed about figures of revenue generated “through the increase in the prices of fuel. We will have to sit and calculate that but it’s never happened in the past.” He is going to have to work over-time and we will end up paying more for cool air.

P. Chidambaram also remarked that “the voices of other ordinary citizen or economists” have not been consulted. Come on now, if one has to build a $5 trillion economy by 2024, one cannot possibly keep play the debate game forever. We’ve already spent decades hurling objections for political motives and anyway, why would the ordinary citizen want to get sleepless over economics when there are more interesting things happening in the world of cricket.

It is difficult to keep rofl-ing over dry figure-inundated economy-infested words that budgets fires towards us unless people like Mamata Banerjee step in. She called it “completely visionless which will increase the sufferings of the people” and was clearly out-classed by Sheila Dikshit who declared it to be “a disappointing budget – full of rhetoric and tokenism…” Randeep Singh Surjewala of INC decided to get a bit more creative in his comment and called it “an utterly lackluster, non-descript, uninspiring and directionless budget. Zero on economic revival. Zero on job creation.” Quite obviously then, poor Amarinder Singh had nothing left to pick up and so he calmly said that the budget “has nothing to offer to any section of the society.” The point to be considered here is that everyone knows that every budget aims to boost business and invariably has features that have a deep impact on whatever facet is important for the period in question.

Budgets have always been about the birth of new slogans. This one in 2019 is no exception. Naari to Narayani nudges women empowerment and obviously aims to target issues like construction of toilets and triple talaq. Har ghar jal is the resolve to make safe drinking water available to every household. Gaon, garib, kisan touches upon housing, roads, and farmer-friendly policies and schemes. The problem with impressive taglines and slogans is that they have invariably remained just that in the past. I do have a lot of asha, vishwas, and aakanksha this time simply because yakin hi toh koi rasta nikalta hai, to quote the current FM Nirmala Sitharaman.

Rankings And Online Education In The Post-Covid Era

To hail or not to hail a CAB?