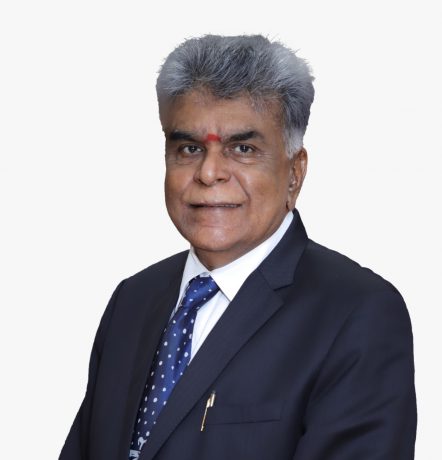 He is a man of many accomplishments with an experience of over three and a half decades and has achieved path- breaking accomplishments in the Apparel Sector. He is President of the Federation of Indian Export Organizations (FIEO), an apex body of all export promotion bodies in the Country and Honorary Chairman of the Tirupur Exporters’ Association (TEA), Former Chairman and Southern Region In charge of the Apparel Export Promotion Council (AEPC). He was the first Chairman of the Apparel, Made-Ups & Home Furnishing Council (AMHSSC), and under his dynamic leadership; AMHSSC has been able to position itself as one of the best Sector Skill Councils in India. He has been the Chairman of the India Knit Fair Association (IKFA) for the past 24 years. He has also been the Chairman of the Tamil Nādu Branch of Indo-American Chamber of Commerce.

As a visionary Industry leader for the Indian Apparel Sector, he has actively and strongly represented the issues of the Apparel exporters and has played a vital role in the tremendous growth and overhaul of the Apparel Sector in India, especially for the MSMEs. As the Founder President of Tirupur Exporters’ Association – popularly known as TEA, his contribution to the growth of Tirupur exports has been outstanding. The Sector saw a growth from a mere Rs.  15 Crore to over Rs.30,000 Crore. He has been instrumental in bringing Tirupur on the global map by getting it recognized in the State as Apparel cluster hub. Over the years, he has also strongly promoted the manufacturing and export of synthetic garments, as he could foresee the vast potential of the product in the global market.

Recognizing his unparalleled service towards the Domestic & Export Industry in the Apparel sector, the Central Government conferred the prestigious “Padma Shri” award on him in the year 2009. He was also awarded with Degree of Doctor of Literature (Honoris Causa) by the Bharathiyar University, Coimbatore for his distinguished contribution towards the growth of the Industry and development of the society.

Dr. Sakthivel, as Chairman AMHSSC, is fully motivated and committed to give further impetus to entrepreneurship, job creation and to strengthen the value chain of the Apparel Industry by providing skilled youthful manpower to the industry and living up to the vision of Hon’ble Prime Minister Shri Narendra Modi Ji, of making India, as the World’s Skill Capital.

While thanking Shri Premal Udani for his excellent contribution to the Council’s development and leading the team for two years, Team AMHSSC extends a warm welcome to Dr. Sakthivel and looks forward to his experience and exemplary leadership for taking India’s Apparel Sector to a much higher level.

How to Use Chkdsk to Scan & Fix Your Hard Drive:...

IIM – Rohtak Host a Conference on Recent Developments in Afghanistan