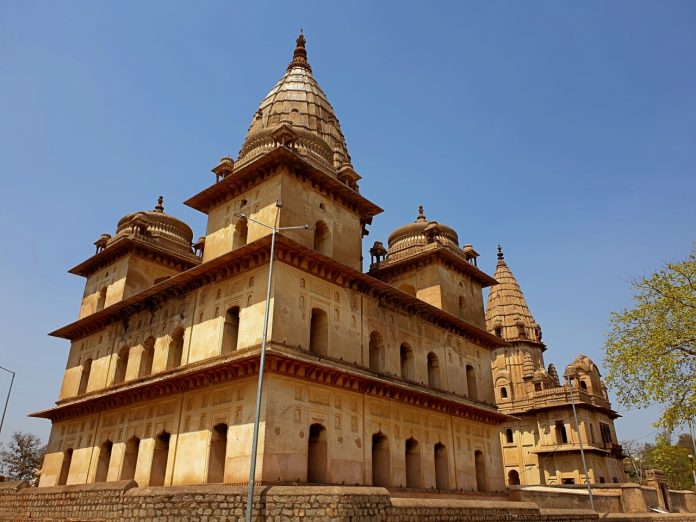 Water connects people, architecture, religion, mythology, and society to each other in many ways… and this happens not just in India but the world over. Water carries with it hundreds of stories of existence, survival, traditions, rituals, and explanations for that which remains unexplained so far just as easily as it brings to the border of visibility a million other unexplained things. Water is vital. Orchha does all of this without batting an eyelid. The place is as much an enigma as it struts around with definitions of things.

Orchha is a place… and though I wouldn’t call it a city yet, the truth is that it is far grander than a mere village. The drivable nearness to Jhansi makes it easily accessible for everyone. The Betwa river with its large boulders lends it an adventurous spirit meandering through photogenic sunrises and sunsets. The temple bells and all the chanting around distributes a sublime sermon to the mind, the presence of ancient monuments and cenotaphs act like history conduits connecting time, and almost everything else here and around weave hundreds of stories that can hold the mind spell-bound. Places like Orchha, I believe, are forever secular and liberal… and I am sure the water of river Betwa is what Holy water is for Christians, Amrit for Sikhs, and is as scared as Zamzam well is in Islam, or the Ganges is in Hinduism. It comes as no surprise that Orchha too has its own special tale that brings to it a temple where Ram isn’t a mere deity but remains there as Raja Ram worshipped as divine king or the ruler with the powers of God.

The tale of Ram Raja Shrine

The story clarifies why the idol of Ram is in the Rani’s mahal and not in the Chaturbhuj temple that was constructed for it. The story talks about the time when Ganesh Kunwari was challenged by her husband, King Mudhukar Ju Dev in the sixteenth century to return only if she came back with Lord Ram as her child. The king was a Krishna bhakt and the queen was a Ram bhakt and this tussle finally led to her performing penance in Ayodhya and throwing herself in the Saryu river as a final bid… and this is when Ram appears as a little child. The queen then travels for eight months and twenty-seven days sometime in 1575 during the pushya nakshatra (Hindu vedic Astrology describes this period as the one in which Goddess Lakshmi was born, implying that birth during this period ushers in good luck and prosperity.) The twist to the tale happens when she reaches Orchha and goes first to her mahal. The child transforms into an idol and establishes his position here, making it impossible to move him to the temple that had been specifically constructed for it. It is for this reason that Ram here has all the privileges of being worshipped as a king, stays in a palace, has his own guard of honour and even a gun salute! Another interesting factoid related to this temple of Ram Raja is that though Ram spends the day at Ayodhya (his mythical place of birth), he spends the night at Orchha.

It wouldn’t be incorrect to say that this palace temple is a treat for the tourist though photography isn’t allowed inside its precincts. Another strange story about this temple is that only if a worshipper manages to get a glimpse of Ram’s big toe on his left foot will the trip be really blessed. This is difficult as the entire idol is covered with different fabrics and flowers and locating the big toe in the short time one gets in front of the idol can be challenging… and this is because the Lord is sitting in padmasan or lotus position with only the left leg crossed over the right thigh. Another interesting factoid about this idol is that Ram holds a sword in his right hand and a shield in the other.

Orchha has a combination of history, mythology, and religion running through its lanes and by-lanes. It is believed that well over half a million domestic tourists and more than 25,000 foreign tourists visit the place. This is besides the nearly two thousand daily temple goers which goes up during Hindu festivals like the Makar Sankranti, Basant Panchmi, Shivratri, Ram Navami, Kartik Purnima and Vivaha Panchami.

Besides the mythologically interesting Ram Raja temple, this place has a number of ghats, the most known being Kanchana ghat, a number of Cenotaphs, and the fort with its Raja and Rani Mahals. An early morning walk over the rapta towards the forest reserve took us to a spot where we could photograph the Cenotaphs in soft light… and by the time we walked back we could see a number of devotees bathing in the Betwa, pujaris in bhagwa clothes briskly going towards their posts in various temples, tourists on bicycles, and chai-taprisready with the water boiling for tea and ready with their simple inventory of biscuits and pasties. The devotees were already out for the morning aarti but we decided to explore the fort.

Orchha is a photographer’s delight

Cross the Advara bridge and enter the Orchha fort through its only entrance, the Katila gate and you’re in a photographer’s heaven. This bridge with pillars with arches was built in the 10th century AD and connects the citadel zone with the outer side and represents Bundela architectural prowess.

Orchha is a UNESCO heritage site that came into existence because the Bundelkhund rulers wanted to remain unnoticed by the Tughlaqs in the 15th century. No wonder then that the name Orchha or Urchha means ‘hidden’. Once inside the fort, one can discern both Bundelkhundi and Mughal influences in the structures. The Jahangir mahal, Raj mahal, Sheesh mahal, Jan Bhavan, Rai Praveen mahal, two gardens and baths are a part of the Orchha complex.

The steep stairs can be quite a pain… but once you are on the top floor, the views are unbeatable. Domes, brackets, arches, pillars, roofs, niches, and squinches are spread all over and this is besides the varying kinds of jharokhas or lattice-work here. The turquoise tiles in Jahangir mahal(specially built by Raja Bir Singh Deo, for a visit by Mughal emperor Jahangir in the 17th century) and the paintings of Ram and Krishna, incarnations of Lord Vishnu, nayak-nayikas, rag-raginies are some of the other gems that are impressive.

It is not just the Chhatris and the fort besides the Ram Raja temple that make up the wonder of Orchha… all across the town are little shrines and memorials and each of them come with a stimulating tale of its own. The 14 stone Chhatris or the cenotaphs on Kanchana ghat are dedicated to erstwhile kings of orchha and have spires similar to those found on temples… an exception being the Raja Bir Singh Deo chhatri that has a distinct Islamic influence.

There is a lot more here…

The open-air crafts market here has batik textiles, jute craft, terracotta and jewellery besides Pithora and Gond paintings, saris from Chanderi, dhokra metal cast artworks… and besides all this are the fascinatingly fluorescent walls of the quaint houses here, the lanes that lead you through houses with khapraels on the roof, doorways with kundis, and one really mustn’t miss sipping Sannata, the local version of chhach that redefines spicy. If you’re lucky or have the right connections, you might happen to meet people from the royal family. Well, as my trip to Orchha was with the Times Passion Trails, I not only had the advantage of a short discussion with the Royals over lunch but also a peep into the history of the royal family in their own words.

Orchha is a place where culture, heritage, mythology, religion, architecture, and nature are as accessible as comfortable and classy places to stay with all modern-day amenities.

Indian-origin scientists develop AI system to detect and avoid yourself ...