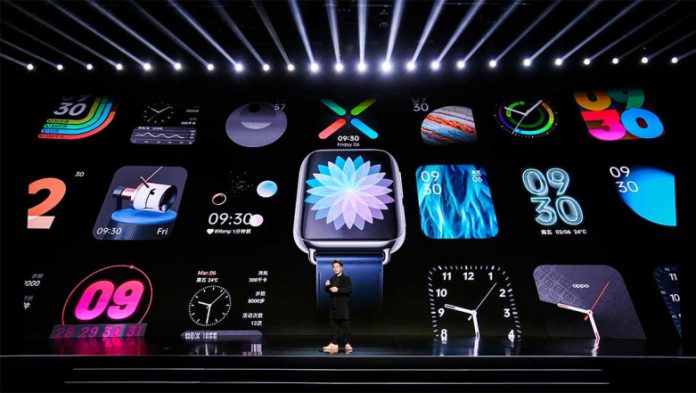 We saw the new Oppo Watch weeks ago when it first leaked, and it was clear from the start that we were looking at a blatant Apple Watch ripoff. It’s like Oppo didn’t even try to come up with something unique. The Oppo Watch is so similar to the Apple Watch that you might not believe it’s real. But it is. Oppo unveiled it on Friday, and the device looks exactly how we thought it would. With that in mind, there is one Oppo Watch feature that the device it copied could benefit from. And it’s not the curved display.

How do you try to make an Apple Watch clone sound like an original product? You add curved side edges to it, and you use two distinct buttons instead of the Digital-Crown-and-Side-button combo of the Apple Watch. Everything else about the Oppo Watch design seems familiar. Just look at all the images below. The screen size and overall design, the metal frame, and even the bands scream Apple Watch.

The back of the watch features “an integrated 3D ceramic design and sensors designed to maximize contact with the skin without exerting pressure.” The watch comes with a built-in heart rate sensor like the Apple Watch. And it comes with five exercise sensors, as well as activity and breathing reminders.

The Oppo Watch comes with built-in eSIM support like the cellular Apple Watch. And like Apple’s smartwatch, it supports music playback, payments, and watch apps.

The Oppo does have one feature the Apple Watch has yet to get, and that’s sleep tracking. According to the company, the Oppo Watch can monitor sleep and generate detailed reports about the sleep experience.

Sleep tracking has long been rumored for the Apple Watch, and we might get it in the near future, so that’s not the feature Apple should steal from the Oppo Watch. What Oppo did for the smartwatch was to adapt one of its iconic smartphone technologies, which would also be a good fit for the iPhone. That’s the new VOOC super-fast charging technology for the battery, which is called Watch VOOC Flash Charging.

A full battery charge takes 75 minutes, according to Oppo, “and 15 minutes of charging time reportedly yields a 46% charge, which corresponds to approximately 18 hours of use time.” No, we’re not sure why a press release says “reportedly.” But it’s pretty impressive if it’s actually true.

A full battery charge is good for 40 hours of use, and the Power Saver Mode lets you use essential functions of the watch for up to 21 days on a charge. That super-fast charging might come in handy for the Apple Watch, which needs about 2.5 hours to reach 100%, according to Apple.

The Oppo Watch will be available globally starting on March 24th, when it will launch in China. That version will run an Android-based ColorOS operating system, but other markets might get a different version. The phone will cost 1,499 yuan ($215) in China, which is a much lower starting price than the Apple Watch.