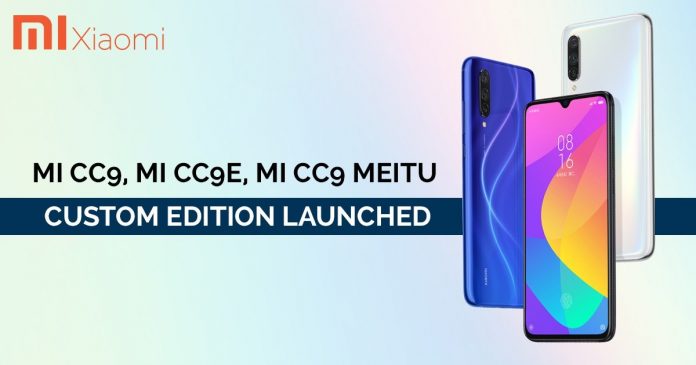 There are rumors suggesting that these phones could make an entry in India with different monikers, the Mi A3 and Mi A3 Lite.

Xiaomi has opened up yet another sub-brand to take on the competition; this time it is called CC which is the new name given to the Meitu brand that Xiaomi had taken over some time back. The first set of phones from the CC stable are called the Mi CC9 and the Mi CC9e. The phone with the suffix e in the moniker is the lower one of the two. Here are the details of the two new devices launched in China yesterday.

The Xiaomi Mi CC9 sports a 6.39inch full HD+ AMOLED display offering a screen resolution of 1080x2340pixels and a healthy 403ppi pixel density. The processor fitted on this smartphone is the octa core Qualcomm Snapdragon 710SoC that clocks a speed of 2.2GHz. The RAM support for this processor is 6GB, coupled with onboard storage of 64GB and a 128GB storage variant can be purchased as well. Android Pie will be the OS on this Xiaomi Mi CC9 smartphone.

For optics, there is a triple 48MP+8MP+2MP configuration camera setup. As you would have guessed, the 8MP lens is the wide-angle one while the 2MP camera acts as the depth sensor. The front camera for selfies is a huge 32MP sensor, housed inside a waterdrop notch. Xiaomi had loaded the camera with AI capabilities that will help the user add beautification effects to the photos they capture. Another unique feature is the addition of ‘Mimoji’ which is Xiaomi’s own version of emojis.

The phone comes with a 4030mAh battery and the complete suite of communications options. White Lover, Blue Planet and Dark Prince are the three colours in which this new smartphone will be available for purchase. There are special effects given on the Blue Planet coloured phone with dark blue refraction patterns.

Now, the Xiaomi CC9e sports a smaller 6.08inch display, with the same AMOLED Full HD+ display and other specs on the display front. One difference the phone has over the CC9 is that the main processor is the Qualcomm Snapdragon 665SoC. There are two RAM variants, 4GB and 6GB while the internal storage options are 64GB for the 4GB RAM variant and 64GB and 128GB for the 6GB variant.

The same camera specifications have been retained for this CC9e model as well and the battery too is the same 4030mAh as you will find on the Mi CC9 smartphone.

As for pricing, since the launch has been limited to China as of now, the prices for that market are announced. The INR equivalent is mentioned in brackets.

Though there is no official confirmation on the launch of these two phones in India, there are rumours suggesting that these phones could make an entry with different monikers, the Mi A3 and Mi A3 Lite.

With lockdown extended till May 3, analysts expect more pain in...

It’s Not That Simple To Be Simple, Says Chetan Bhagat

Google’s Nest Hub Max is all set for its grand launch...