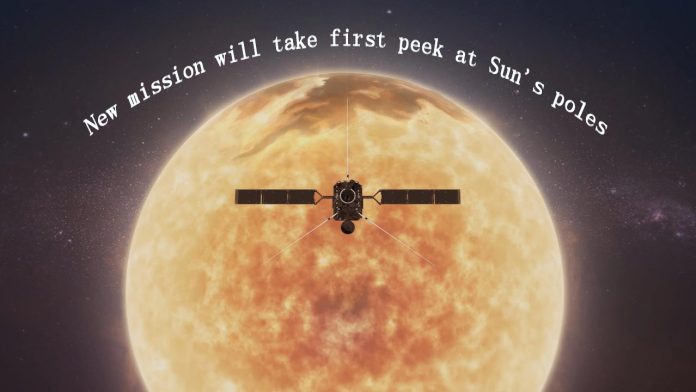 A new spacecraft is journeying to the Sun to snap the first pictures of the Sun’s north and south poles.

Solar Orbiter, a collaboration between the European Space Agency, or ESA, and NASA, will have its first opportunity to launch from Cape Canaveral on Feb. 7, 2020, at 11:15 p.m. EST. Launching on a United Launch Alliance Atlas V rocket, the spacecraft will use Venus’s and Earth’s gravity to swing itself out of the ecliptic plane – the swath of space, roughly aligned with the Sun’s equator, where all planets orbit. From there, Solar Orbiter’s bird’s eye view will give it the first-ever look at the Sun’s poles.

“Up until Solar Orbiter, all solar imaging instruments have been within the ecliptic plane or very close to it,” said Russell Howard, space scientist at the Naval Research Lab in Washington, D.C. and principal investigator for one of Solar Orbiter’s ten instruments. “Now, we’ll be able to look down on the Sun from above.”

“It will be terra incognita,” said Daniel Muller, ESA project scientist for the mission at the European Space Research and Technology Centre in the Netherlands. “This is really exploratory science.”

The Sun plays a central role in shaping space around us. Its massive magnetic field stretches far beyond Pluto, paving a superhighway for charged solar particles known as the solar wind. When bursts of solar wind hit Earth, they can spark space weather storms that interfere with our GPS and communications satellites – at their worst, they can even threaten astronauts.

To prepare for arriving solar storms, scientists monitor the Sun’s magnetic field. But their techniques work best with a straight-on view; the steeper the viewing angle, the noisier the data. The sidelong glimpse we get of the Sun’s poles from within the ecliptic plane leaves major gaps in the data.

“The poles are particularly important for us to be able to model more accurately,” said Holly Gilbert, NASA project scientist for the mission at NASA’s Goddard Space Flight Center in Greenbelt, Maryland. “For forecasting space weather events, we need a pretty accurate model of the global magnetic field of the Sun.” 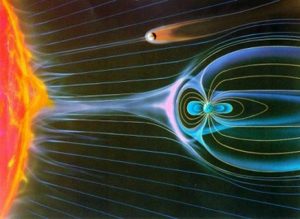 Today, we know it as the approximately-11-year solar cycle in which the Sun transitions between solar maximum, when sunspots proliferate and the Sun is active and turbulent, and solar minimum, when they’re fewer and it’s calmer. “But we don’t understand why it’s 11 years, or why some solar maximums are stronger than others,” Gilbert said. Observing the changing magnetic fields of the poles could offer an answer.

The only prior spacecraft to fly over the Sun’s poles was also a joint ESA/NASA venture. Launched in 1990, the Ulysses spacecraft made three passes around our star before it was decommissioned in 2009. But Ulysses never got closer than Earth-distance to the Sun, and only carried what’s known as in situ instruments – like the sense of touch, they measure the space environment immediately around the spacecraft. Solar Orbiter, on the other hand, will pass inside the orbit of Mercury carrying four in situ instruments and six remote-sensing imagers, which see the Sun from afar.

“We are going to be able to map what we ‘touch’ with the in situ instruments and what we ‘see’ with remote sensing,” said Teresa Nieves-Chinchilla, NASA deputy project scientist for the mission.

After years of technology development, it will be the closest any Sun-facing cameras have ever gotten to the Sun. “You can’t really get much closer than Solar Orbiter is going and still look at the Sun,” Muller said.

Over the mission’s seven year lifetime, Solar Orbiter will reach an inclination of 24 degrees above the Sun’s equator, increasing to 33 degrees with an additional three years of extended mission operations. At closest approach the spacecraft will pass within 26 million miles of the Sun.

To beat the heat, Solar Orbiter has a custom-designed titanium heat shield with a calcium phosphate coating that withstands temperatures over 900 degrees Fahrenheit – thirteen times the solar heating faced by spacecraft in Earth orbit. Five of the remote-sensing instruments look at the Sun through peepholes in that heat shield; one observes the solar wind out to the side.

Solar Orbiter will be NASA’s second major mission to the inner solar system in recent years, following on August 2018’s launch of Parker Solar Probe. Parker has completed four close solar passes and will fly within four million miles of the Sun at closest approach.

“We are learning a lot with Parker, and adding Solar Orbiter to the equation will only bring even more knowledge,” said Nieves-Chinchilla.