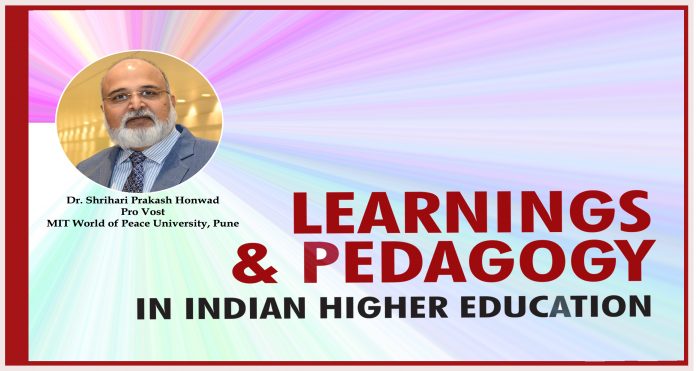 The Indian Higher Education continues to thrive in its blissful aura of social overvaluation irrespective of the utility of that education to the society. Education to me is what is left after we leave the school/college/university.

In India like many parts of the world we believe education is the net sum of the inputs we push through unsuspecting minds of youngsters who will lead the society into the future. While the inputs are indeed important, overemphasis on them may lose sights of the desired outcomes altogether.  The most important aspect of self-evaluation, read, introspection as to whether inputs are indeed resulting in outputs has never happened in most situations.

This is something which Indian Higher Education is suffering from while the extent varies from place to place and field to field. In absence of Society and Academia alignment on future challenges, both would keep pointing fingers at each other as to expectations not matched or lack of cooperation and support. For a country, which professed of meritocracy from time immemorial, for a nation built on the wisdom of ages, for society ahead of the rest of the world by millennials, this indeed is a pretty sorry state to be in.

The role models were Nalanda and Takshila for the world and as every society which forgets history, we seem to be condemned to rediscover and rebuild the lost glory using western models. Perhaps it would be interesting to see if any of the modern ideas of pedagogy existed during the period of glory and pride.

Let us begin with the way students would study. Modern research seems to be indicating that our students used methodologies that developed brainpower not just memory power namely discussions and discourse. The examination system too was quite different. Students had to prove themselves in open and real challenges based on the outcomes and never based on inputs, for example, the test designed by Dronacharya for Kauravas and Pandavas. Imagine if Arjuna was to give a three hour written examination on archery. A perfect combination of skills and knowledge was considered to be necessary and each student provided with relevant skills and knowledge as per his choice, ability and effort to make him useful to society which would help him find a career in society. That the graduate attributes remained unchanged for long periods did help the design a lot. But, the early universities and gurukuls were potboilers of innovations and scientific acumen. At least, all innovations happened with the Rishi’s in their ashrams which were the IITs of that period.

Even pedagogies used were phenomenal and varied and ensured student engagements. Education was multidisciplinary and multiethnic. Our ancient Gurukuls used techniques which we are today rediscovering from the western world in different forms. The fact that all our scriptures are in the form of Teacher-student interaction, quite often in the form of questions and answers, with questions asked by students most of the time are an indicator of the modern “flipped classroom”.

All students in a gurukul were supposed to do certain chores where community living, teamwork and leadership qualities were imbibed naturally and quite often from each other. Teachers, in particular, believed in observing and facilitating student learning rather than often believed sage on stage where the teacher kept on lecturing and students only listened. I am sure, great teachers visiting gurukul would talk about the innovations elsewhere but that was not necessarily the only model used for the learning process. I am sure, in absence of paper and written documents large volumes were preserved through memorizing but with the advent of technology, technology was indeed adapted and used extensively. It was indeed a great age where students had to learn skills by doing it themselves rather than just reading or memorizing.

Are these ringing bells in our minds as today we want to give students practical knowledge and hands-on experience. There may be a certain amount of dramatization and glorification of history in this article, but look at any new pedagogy and we can find an equivalent learning strategy employed from our history or mythology depending on what one likes to believe. Collaborative learning principles were employed in Gurukul by individual gurus and each guru who had to teach a particular discipline employed a methodology suitable for that along with exercises suitable for that discipline. I would rest my case with one example of Satyakama, who wanted the ultimate knowledge of life (Atma Gyan) so that he can overcome the humiliation of not knowing who his father could be, was given a set of malnourished cows and asked to increase the herd strength ten times. During the project, Satyakama learned many things from the bull, the bush and the serpent etc but and after achieving the end goal of his project his Guru explains to him the Atma Gyan, is this not the much-touted Project Based Learning. The emphasis of mentors’ role is beautifully laid out in this instance while showcasing the need to do the project so that the prerequisites for Atma Gyan were all achieved.

In conclusion, it is high time for the Indian Higher Education to turn in to not only outcome-oriented but also into a tailor-made curriculum mode taking into account individual choices, efforts and abilities all at the same time and readopt in modern terminology, choice-based curriculum, with flexibility and adapt pedagogy that ensures student engagement and experiential learning. Incorporate rubrics that evaluate outcomes and encourage development skills and knowledge and use evaluation methods that remain relevant and appropriate for the skills and knowledge being tested.

The Higher Education System needs to reinvent itself and achieve perhaps its past glory in modern times with modern infrastructural facilities and modern problems rather also cater to the varying needs of our students, particularly the millennial who are known to be a generation who know their minds, are transactional and extremely individualistic but have access to the humongous amount of information.