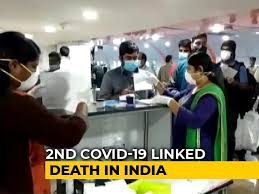 India on Friday reported second death from the novel Coronavirus as the number of confirmed cases jumped to 82. A 68-year-old woman from West Delhi died after she came in contact with a positive case, according to health ministry officials. The first death was reported in Karnataka on Thursday.

Many states went into battle mode to contain the spread of virus, shutting down schools, colleges and theatres. Many public events, including the cash-rich IPL were postponed.

Meanwhile, the number of coronavirus-related deaths in mainland China on Friday rose to 3,189, up by 13 from the previous day.

All the latest deaths were reported in the province of Hubei and 10 of them were in Hubei’s provincial capital of Wuhan.

The country’s health authoritiess said on Saturday that mainland China had 11 new confirmed cases of coronavirus infections, bringing the total number of confirmed cases so far to 80,824.

In another development, US President Donald Trump on Friday declared a national emergency over the fast-spreading coronavirus, opening the door to providing what he said was about $50 billion in federal aid to fight the disease

NLP and Psychometric Profiling are Taking Their Roots in Indian Education...