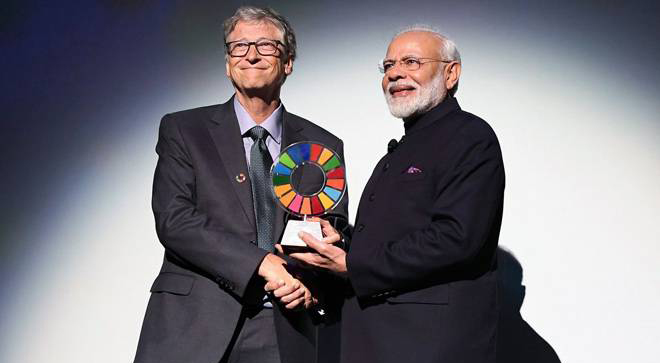 In his speech after receiving the Global Goalkeepers Goals Award 2019, Prime Minister Narendra Modi said  “democracy is not just about voting in a popular government, it’s about putting people in the centre of systems and schemes.”

Prime Minister Narendra Modi has dedicated the Global Goalkeepers Goals Award 2019 to the 130 crore people of India who partnered with government to meet the Swachh Bharat goal. The award was given to him by the Bill and Melinda Gates Foundation for providing toilets and improved sanitation to dramatically improve the lives of at least 500,000 million people.

“The honour is not mine but of the crores of Indians who not only fulfilled the Swachhh Bharat dream but also made it a part of their daily lives,” said Modi, in a 15 minutes speech in New York on Wednesday.

“In the last five years, more than 11 crore toilets were constructed. The Swachh Bharat mission has benefitted women and girls the most. They had to wait for dark to go out or drop out of school because of the lack of toilet facilities,” he said.

“India is ready to share best practices and with other nations so that we can collectively work to improve global sanitation standards,” said Modi.

This is the third big international award for Modi, who won the Seoul Peace Prize 2018 for reducing social and economic disparity and rooting out corruption; and 2018 UNEP Champions of the Earth Award, UN’s highest environmental honour, for championing the International Solar Alliance and pledging to eliminate single-use plastic in India by 2022.

Under the Swachh Bharat (Clean India) campaign launched on October 2, 2014, to mark Mahatma Gandhi’s birth anniversary, 100,467,789 toilets have been built and 599,963 villages have been declared open-defecation free.

“World Health Organization (WHO) estimation of the potential health impacts of Swachh Bharat Mission-Gramin in 2018 found it averted at least 300,000 deaths and more than 14 million DALYs (disability-adjusted life years, which is measure of lost productivity) between 2014 and October 2019,” said Dr Poonam Khetrapal Singh, regional director, WHO South East Asia Region.

“Before 2014, unsafe sanitation caused an estimated 199 million cases of diarrhea in India annually. Modeling studies done by the World Health Organization shows that the problem will almost be eliminated when universal coverage and use of safe sanitation facilities is achieved,” said Dr Khetrapal Singh. 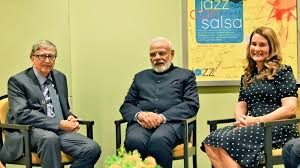 The Global Goalkeepers Award to the prime minister, however, drew flak from human rights groups and activists including three Nobel Peace Prize winners -peace activist Mairead Maguire from Northern Ireland; politician-activist Tawakkol Abdel-Salam Karman from Yemen; and lawyer-activist Shirin Ebadi from Iran. Wearing “I stand by Kashmir” T-shirts, the activists picketed the Gates Foundation’s office in Seattle and handed over a petition of 100,000 signatures demanding the award be rescinded.

“The BMGF award, along with the Seoul Peace Prize and UNEP’s Champions of the Earth Prise, serve to legitamise and embolden Modi and his supporters to intensify their divisive politics…,” said Professor Lyla Mehta from the Institute of Development Studies, UK, in an open letter signed by 27 developmental academics and activists on Monday.

The Gates Foundation says that sanitation-related diseases kill nearly 500,000 children under the age of 5 worldwide every year, but no other national government has launched a similar campaign at this scale.

“Sanitation was chosen because in a lot of countries, it’s not discussed, it’s an almost hidden thing. The poor quality of life and the number of disease caused by poor sanitation are terrible and yet a lot of governments are unwilling to talk about it because it isn’t easy to fix and it takes time. India, over the last five years, has allocated resources and really talked about the need to clean up. India is an exemplar on this and so it’s very appropriate to have an award for something that is not as visible as vaccine coverage,” said Bill Gates, co-chair of the Gates Foundation, in an exclusive interview to Hindustan Times earlier this month.

Poor sanitation lead to several diseases diarrhoea, cholera, dysentery, typhoid, worm infections and insect-vector diseases such as lymphatic filariasis and trachoma, which indirectly lead to malnutrition, stunting, anaemia, and frequent infections like tuberculosis and pneumonia because of lowered immunity.

The Gates Foundation gives the annual award on the sidelines of the UN General Assembly to celebrate efforts that have improved the lives of the poor and accelerated efforts to meet the sustainable development goals, which 17 actions to end poverty, protect the planet and provide better future for all by 2030.

Why do so many writers love to voice unflattering thoughts about...