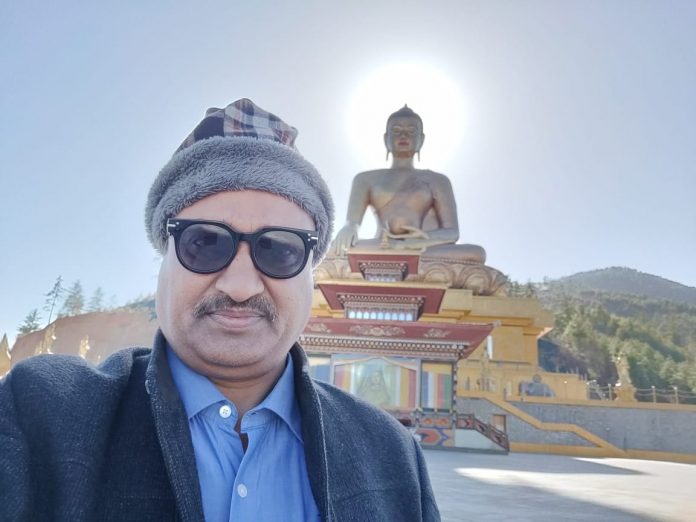 Dr. Rashmi Jeta – An Educationist of repute and a prominent Film Director, is known for his meaty contribution in the field of short films. He is the Winner of many prestigious Awards including the coveted Dada saheb Phalke Film Festival award, the Golden Fox nominee Award, Switzerland International film festival Award, the Best of India film festival award California and award of excellence conferred by National Film Development Corporation (NFDC) and Ministry of Information and Broadcasting, Government of India.

Q.Congratulations on featuring in Marquis who’s who of the world published from United States of America. Could you please share your success story?

Well, let me clarify at the very outset that this is neither success nor a story. It has been a voyage with a vision and a cherished desire to surmount obstacles to realize my dream. To be creative is important but to apply this skill to benefit others is perhaps the need of the hour. I have used this tool in academics and filmmaking so as to make both more meaningful. After completing my education from Delhi University and JNU, when people settle down in life, I, instead, began exploring myself as a teacher, cricketer and filmmaker. As a teacher, I employed new self-made techniques of teaching with alternative methodology and as a filmmaker, tried to become the voice of the unheard. I always felt that cinema is much more than mere entertainment. Many make films for business; I do it for a cause. All my short films and documentaries convey profound messages. In teaching too, I have set a new trend of adopting alternative methodology to teach the first generation learners, thereby assisting them to realize their dreams.

Q.As a successful academician, how do you see the importance of NEP 2020 in the context of Indian education?

Education in India must be used as a cementing bond of nationalism on the platform of multilingual, multi-ethnic, multi-religious and multi-cultural diversities. It should be based in the context of the recipients. The NEP 2020 truly serves this objective. It primarily is teaching-learning methodology i.e. understanding the needs of the students with respect to their divergent socio-cultural background. The objective is to evaluate the need to undergo a metamorphosis in teaching methodology to make it more students centric. The socio-cultural paradigm of the recipient must be taken into consideration. Another objective of NEP 2020 is to design strategies to teach the slow learners and inculcate their interest in the subject. Designing customized and suitable teaching modus operandi may become a new academic vision with a new mission for students with learning difficulties. It merits mentioning here that the first change must come from the teachers themselves. We the teachers must update ourselves and design our classroom delivery in such a way so that the last in the row is empowered with knowledge.

Q.There is a huge gap between Quality higher education and weaker sections of society. How do we bridge this yawning gap? What are the main challenges facing education today?

Yes, there is a huge gap between Quality higher education and weaker sections of society. In fact, the purpose of education is to reach out to the doorsteps of the remotest corner of India. After all education is a social service and not a profession or profit tabulating machine of corporate business. It is mandatory to take higher education to the underprivileged, disadvantaged and economically weaker sections of society and to bring them in the mainstream of social life. It is equally important to redefine the meaning of education within the paradigm of moral values and develop self-confidence and rational thinking among students. Further by expostulating the role of education by linking it with the areas of job aspirations would definitely meet the challenges, our system is facing today. I sincerely believe that the Krishna – Arjun tradition must breathe amidst a computer-generated environment. The intellectual peers must bestow blessings where rich cultural heritage coexists with modern scientific and value-based temperament. As a teacher- filmmaker, I began a practice of shouldering social corporate responsibility to take teaching on to the digital platforms so as to reach out to the unreachable.

Q.You are among the proud filmmakers to have received the prestigious Dada SahebPhalke Film Festival Award and many other National and International Awards for your film on education. How do you see this journey?

This journey of making meaningful cinema has been tough as I received no formal training in filmmaking but did develop my own idiosyncratic style of narrating the story to the audience. All my projects are well researched, hence received accolades, awards and appreciation in film festivals globally. My first film was a three-minute documentary on Swachh Bharat which conveys that filth does not breed in the lap of poverty instead grows in the darkness of ignorance. The second documentary was The Whispering Walls of Khajuraho which won me a dozen National and international awards. It showcases Khajuraho temples from a new perspective of women empowerment in medieval Indian and not merely as erotic carvings on indecent stones. Another was The Cursed Queens, a short sensitive documentary on the pathetic plight of young folk dancers of the Bundelkhand region of Madhya Pradesh, being subject to exploitation in the name of traditional culture. The film won me accolades and appreciations in American Film Festivals too. Very recently another film close to my heart and well researched was on Mahatma Gandhi titled The Mahatma Returns. It talks about Gandhi, a figure who is beginning to get mired in controversy and conflicted opinions. From championing ideals of simplicity to discussing his ideas of nationalism and patriotism, the film constructs a positive narrative around him as opposed to theories of his detractors.

Apart from these, there are a few more that have been captured by my lens. This journey has been full of wax and wailing.

Q.Please throw some light on the efficacy of adopting alternative methodology and motivational speech to empower the learners?

Alternative methodology of teaching and motivation are the two important components that I personally have inculcated in my modus operandi. Alternative methodology primarily means adopting a different yet interesting style of explaining a particular topic. Teaching with logical examples is one useful ingredient of this methodology. But prior to practicing it, one must develop an insight into the subject. It gives you the liberty to discard old hackneyed approach and to employ your own researched skills to explain a topic to the students. Fortunately, it worked out for me as I taught History, English, Aptitude and other subjects to thousands of rural students who are placed well globally today. Motivation injects energy necessary for those who have little hope to excel. It sometimes works wonders and even non-performers start showing signs of excellence. Instead of being captious if you motivate someone you change thousands of lives.

Q. In view of the government’s ongoing promotion of skills and job-oriented courses in India, how do you see the relevance of the study of subjects like history today?

History as a subject has always received global attention largely due to its nature of analyzing the past in a logical paradigm. It has occupied a core position in human learning. History empowers us to analyze the past in the present to prepare ourselves for the future. The past civilizations which reached the zenith of craftsmanship and technical excellence lent us those invaluable skills which still are employed in the contemporary industrial world. History is not merely the story of the past; in fact, we have borrowed immensely from our legacy— the architectural science, the medicinal knowledge, economic apparatus, and unmatchable human resource management, the use of military science, the spiritual science of religion, the mathematical calculation of the Vedic science etcetera. Most of our present economic policies and administrative institutions and welfare schemes can be traced back to Ancient and medieval days. All we need is to study it in the right perspective rejecting the concocted and morphed teachings of social media. We must not forget the bad times of pandemic lockdown when we all divorced the modern life and resorted to the skills of the past to eke out a living.