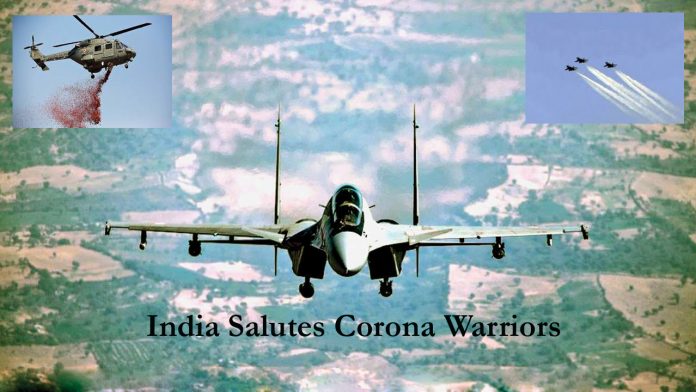 “During the current crisis, it is the doctors, nurses, policemen, media, sanitation workers, delivery personnel, bank employees, government employees and local store owners who have put their lives on the line to ensure that we as a nation are protected and cared for adequately,” said Army PRO Colonel Aman Anand.

NEW DELHI: The Indian armed forces are set to conduct fly-pasts, play military bands, light up ships at sea and shower flower petals at hospitals treating COVID-19 patients across the country today to express gratitude to the people fighting the virus. “During the current crisis, it is the doctors, nurses, policemen, media, sanitation workers, delivery personnel, bank employees, government employees and local store owners who have put their lives on the line to ensure that we as a nation are protected and cared for adequately,” said Army PRO Colonel Aman Anand.
The nation will witness flypasts by fighter and transport aircraft of the Indian Air force at multiple locations.

Col Anand said the aerial salute from the Armed Forces will be flown as low as 500 meters so that everyone is able to witness the same from the safety of their homes.

As a gratitude to all #IndianCoronaWarriors, Indian Armed Forces salute the spirit & determination of these warriors.
An aerial salute is planned over NCR between 1000-1030 h, 03 May 20.

The event will start on Sunday morning with a wreath-laying at the Police Memorial on behalf of all three Service Chiefs to pay respects for the sacrifice by police and paramilitary forces. These aircraft of the IAF will cover major towns from Srinagar to Thiruvananthapuram and Dibrugarh to Kutch. The helicopters from IAF and IN will fly over hospitals treating corona patients and shower petals as a tribute to the corona warriors.

In the evening hours, Naval ships at sea on the coasts of Mumbai, Porbandar, Karwar, Vizag, Chennai, Kochi and Port Blair will light up and fire flares in solidarity with the efforts of our corona warriors.

Indian Naval Aviation assets will shower petals by helicopters on hospitals treating corona patients at Mumbai, Goa, Kochi and Vizag between 10 am to 10:30 am.

The Eastern Air Command will conduct petals drop in Itanagar, Guwahati, Shillong and Kolkata at 10:30 am. While Air Force will display a band performance in Guwahati.

In Gujarat, South Western Air Command has planned petal drops over two hospitals in Ahmedabad and Gandhinagar which will be conducted from 9 am to 10 am.

Trivandrum’s two hospitals will witness showering of flower petals at 10 am by Air Force helicopter.

Eastern Naval Command (ENC) will join the Armed Forces across the country to show solidarity of the frontline soldiers with the Corona Warriors on Sunday.

Naval Officer-in-Charge in Andhra Pradesh will be visiting designated COVID hospital at Visakhapatnam and felicitate the medical fraternity for their efforts.

This will be followed by a naval helicopter from INS Dega showering flower petals on the hospital treating COVID patients in the city.

ENC will illuminate two ships at anchorage from 7:30 pm to midnight at Visakhapatnam coast.

Navy officials said the Western Naval Command will illuminate five naval ships from 7:30 PM to 11:59 PM off Gateway of India in Mumbai. They would prominently display banners “India Salutes Corona Warriors”. They will sound the ship’s siren and fire a  flare at 7: 30 PM at anchorage.

Additionally, the Naval air stations at Goa would organise a human chain on the runway to honour the ‘corona warriors’.