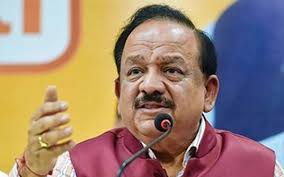 NEW DELHI: While the mortality rate due to Covid-19 is 2-3%, most cases of the contagious disease are largely asymptomatic, Union health minister Harsh Vardhan said on Tuesday. He stressed on the need to create awareness about the higher risk of both morbidity and mortality due to the virus in people who have conditions like diabetes, obesity, fatty liver and chronic liver diseases.

Vardhan said the Ayushman Bharat Health and Wellness Centres are working for screening of such conditions.

The health minister was addressing the second “Empathy e-Conclave” on the occasion of World Hepatitis Day, which was organised by Institute of Liver and Biliary Sciences (ILBS) in collaboration with Airports Authority of India to create awareness among parliamentarians.

The health minister said the pre-emptive and proactive measures taken under the guidance of the Prime Minister have helped control the spread of the Covid-19 pandemic.

He also said hepatitis has become a global health problem. Viral Hepatitis is a very common and serious disease in India but is virtually unknown to healthcare providers and the general public, Vardhan said.

“Individuals with viral B and C hepatitis are at increased risk for liver cancer and chronic liver disease, yet an estimated 80% of persons with chronic viral hepatitis do not know that they are infected. The mantra to educating people is talk, test & treat and I appeal to all participants to support ILBS in this campaign,” Vardhan said.

“I request my colleagues present here to act as a champion/ambassador in spreading awareness about the silent epidemics of Hepatitis B and C and help remove the stigma attached to these diseases,” he said.

Vardhan said ILBS helped in the development of the national viral hepatitis programme, which was launched on July 28, 2018, the statement said, adding that it is the largest programme for Hepatitis B and C diagnosis and treatment in the world.

Vardhan also congratulated the ILBS team for their “tireless efforts” in the fight against the ongoing pandemic by testing SARS-Cov-2 samples for the last four months.