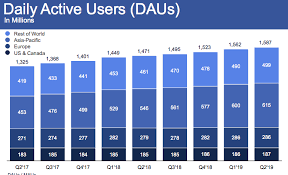 Despite ongoing legal battles with the US government, including a new Federal Trade Commission (FTC) antitrust investigation, Facebook has continued to add users and increase revenue, according to the social media giant’s financial report for Q2 2019. On average for June, Facebook’s daily active users (DAUs) increased eight percent year-over-year to 1.59bn. Monthly active users hit 2.41bn as of the end of June, an increase of eight percent year-over-year.

“We had a strong quarter and our business and community continue to grow,” said Mark Zuckerberg, Facebook founder, and CEO. “We are investing in building stronger privacy protections for everyone and on delivering new experiences for the people who use our services.”

To nobody’s surprise, the majority of Facebook’s revenue came from advertising, specifically on mobile. Mobile advertising revenue accounted for 94 percent of advertising revenue for Q2 2019, up to three percent from Q2 of 2018. Even with Facebook’s recent $5bn record fine from the FTC, the company’s total revenue jumped to $16.89bn (£13.53bn) from Q2 2018’s $13.23bn, an increase of 28 percent.

“Among other matters, our settlement with the FTC requires us to pay a penalty of $5bn and to significantly enhance our practices and processes for privacy compliance and oversight,” stated Facebook’s report. “In particular, we have agreed to implement a comprehensive expansion of our privacy program, including substantial management and board of directors oversight, stringent operational requirements, and reporting obligations, and a process to regularly certify our compliance with the privacy program to the FTC.”

Though the social network has dealt with that $5bn penalty, it is now facing a separate antitrust investigation from the FTC. Furthermore, there’s the Justice Department’s recently announced review of “market-leading online platforms” underway.

Facebook also revealed that over 2.1bn people use its ‘Family’ of services – Facebook, Instagram, WhatsApp, Messenger – every day. More than 2.7bn people use at least one of these services each month. Since the report was released, the Facebook stock has jumped 3.5 percent in after-hours trading.

eMarketer principal analyst Debra Aho Williamson commented: “This company has repeatedly shown that it can grow both its ad revenue and its user base, even in the face of enormous challenges. Today’s earnings release demonstrates that it still has that power. We expect Facebook’s worldwide ad revenue will increase by 22.5 percent this year. That’s a higher growth rate than for digital advertising as a whole, which we expect will increase by 17.6 percent.”