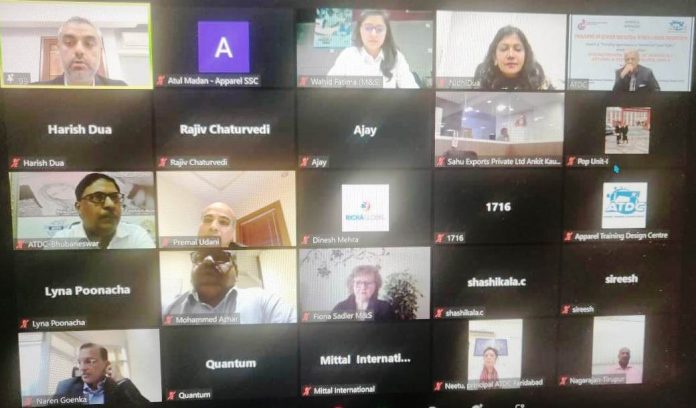 In the virtual session Mr. Premal Udani stated that the initiative is to maximize benefits to the Apparel & Textile industry by voluntarily joining a programme for a safe work environment for women by leveraging a conducive sustainable environment at top, supervisory and workforce level. Udani believed that equality in its truest sense can be achieved when women have the right to participate in building the nation’s economy and that this could be achieved through skill training. The visionary knew how women job creators would automatically pave the way for more women workers, and eventually to even more women entrepreneurs. With an increased participation of women in the workforce, the economic condition of the country would improve.

Dr. Roopak Vasishtha, CEO, AMHSSC said that the Project will cover a total number of 15 factories, minimum 100 workers each (Total 1500) and 14 Peer trainers.

He said: “Training will be conducted for all workers, supervisors and managers including those from middle and senior management and the same is intended to facilitate a safe work environment for women and break the culture of silence, the premise of this project. This process will impact the workers in the garment industry in the years to come, spurring on a positive change in a work culture that values the labour of women and their dignity.”Further he added that the Gender equality programme will focus on creating awareness about gender equality, empower factory workers both men and women on gender equality, laws pertaining to prevention, prohibition and redressal against gender-based harassment and formation of policies and systems.