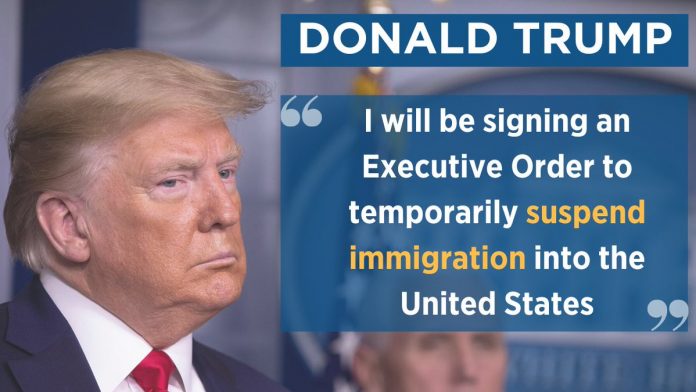 US Coronavirus Cases: The highly contagious coronavirus has now killed more than 42,000 people in the United States, the country with the highest number of COVID-19 deaths.

New Delhi/ Washington: The United States is set to temporarily suspend immigration amid rising number of coronavirus cases, President Donald Trump has tweeted as angry Americans took to the streets to demand an end to crippling lockdowns.

“In light of the attack from the Invisible Enemy, as well as the need to protect the jobs of our GREAT American Citizens, I will be signing an Executive Order to temporarily suspend immigration into the United States! (sic),” Donald Trump, who has encouraged anti-lockdown protests roiling parts of the country,  tweeted this morning.

In light of the attack from the Invisible Enemy, as well as the need to protect the jobs of our GREAT American Citizens, I will be signing an Executive Order to temporarily suspend immigration into the United States!

The US – that has reported over 233,000 cases so far – is the worst hit country by the coronavirus pandemic. Last month, it had suspended all the routine visa services due to the pandemic.

While Mr Trump has talked about suspending immigration visa, the H-1B visa, which is more popular among Indian IT professionals, is a non-immigrant visa.

The fallout from the coronavirus has sparked fears of a second Great Depression with millions around the world losing their jobs as economies grind to a halt. At least 22 million Americans have lost their jobs since sweeping lockdowns were implemented to slow the spread of the virus, and exasperation was growing in some parts of the country.

Travel restrictions and closing of consulate services in many countries including India are already having an impact on issuing of new H-1B visas.

Mr Trump’s tweet on immigration came soon after he made an announcement to add as much as 75 million barrels of oil to the nation’s strategic petroleum reserve as the US oil prices plunged to negative for the first time in history.

With billions of people forced to stay home to curb the spread of the deadly virus, and top producers Saudi Arabia and Russia in a price war, an oil glut pushed prices for US benchmark West Texas Intermediate for May delivery down to -$37.63 per barrel.

“We are filling up our national petroleum reserves. We are looking to put as much as 75 million barrels into the reserves themselves,” Mr Trump said at a daily briefing.

Donald Trump, who seeks re-election in November, has been under fire for his response to the health crisis. Earlier, he had lashed out at the World Health Organization for its initial handling of the outbreak and cut US funding for the global health body.

“We have been warning from day one that this is a devil that everyone should fight,” he said, adding that “there is nothing hidden from the US” about the pandemic.

The United States has also been repeatedly calling on Beijing to share early data on the outbreak, which began in China.

The highly contagious coronavirus has killed more than 42,000 people in the United States. Worldwide, nearly 2.5 million coronavirus cases have been confirmed, the number of deaths have crossed 169,900. About two-thirds of victims are from Europe.

YouTube has been Fined for millions in the US Over Violating...