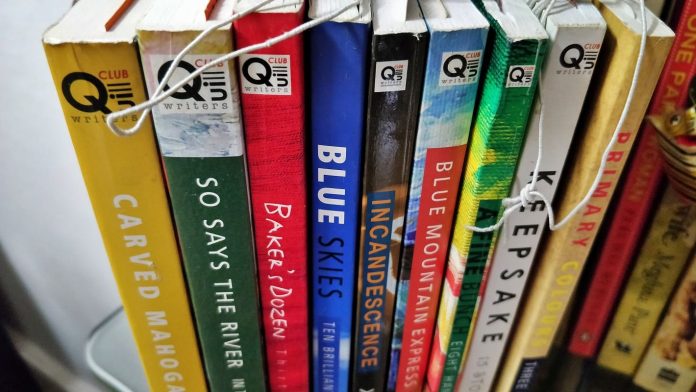 I know one doesn’t necessarily have to dip a piece of goose feather in ink these days to go from pen on paper to print on paper. But then the Quill Club Writers has this charming association with tenets of mentoring and writing and this reference simply sounded appropriate. Quill Club Writers, if you ask me, is actually redefining education. This team has made possible what conventional education sometimes struggles to achieve – they have woken up the creative impulses in the hearts of hundreds of school children all over the country. Let us try and find out how they have managed this miracle.

The first question that I asked Ruchira when I met her was: ‘Are children really interested in writing?’ She looked me with an expression that seemed to say that a creative scintilla is there in every heart, but said, ‘Children are full of stories. Most grow up to gradually forget them as they get busy tying themselves up with everything mundane.’ Ruchira then went on to tell me that they had a well-defined selection criteria and the first thing they do is to identify the level of passion in a kid. As I browsed through the titles of the short stories that school kids had written, I knew she was right. The landlord of minds – When worlds collide – Morphed and merged – Starry eyes – Circles of beauty – Anatomy of the Indian underbelly – New moon, old shadow… these are all titles of short-stories that I have randomly picked from eight anthologies that have an umbilical connection to the creative passion of Ruchira Chordia Mittal and Hemant Kumar. Ruchira mentors authors and this is possible only because she has a fascinating writing style that surprises you with its simplicity of expression. But you know that this simplicity carries in its womb the essence of decades of observations, experiences, and witty conclusions. Hemant is a novelist and mentor who has been with both the mainstream print and AV media… and if you care to search my blog, you’ll be able to find the reviews that I have written for his novels.

Ruchira told me that identifying kids with the strongest passion for creative writing was essential because ‘they are, after all, going to have their work published in an anthology that is going to be bought by readers who are discerning’. She added that their mentoring was directed more towards refining the art of story-telling and that in a workshop lasting a few days one could not possibly aim at improving a child’s command over the language and ‘so we prefer working with kids who aren’t weak in English’.

‘And yes, these kids are interested in writing,’ she smiled as she said this.

The Quill Club Writers team has mentored kids from Scindia Kanya Vidyalaya – Gwalior, DPS – Varanasi, Genesis Global School – NOIDA, Sloka – Hyderabad, Riverside Public School – Kotagiri and a few other branches of Delhi Public Schooland plenty of other schools all over the country and over the years the team has realized that one of the most difficult part in their program is to have those who will not leave because of creative unresponsiveness. ‘But we have our mentoring techniques in place and judging passion is down to a science now. This is vital because it isn’t always about just talent but also the ability to have staying power and we don’t want kids to drop off,’ she said, and then added, ‘we select the writers through two writing tests and an interview. At the writing sessions spanning two weeks, the writers develop their story ideas, structure them, write the stories down and complete their manuscripts. Finally, a well written, ruthlessly edited and well-designed book is ready for launch.’

Real education is all about understanding, identifying and then nurturing the incognito genius within. Most of us spend our lives without even bothering to know that there is a strange giant inside waiting to be awakened. It was heartening to know that there are people in the cut-throat mentoring and publishing industry who have chosen to encourage young authors to develop original ideas, write their stories and refine and edit their manuscripts. The entire process is a convergence of art, science, and passion… and the best part is that these kids are able to finally see their stories on Flipkart, Amazon and some premium bookstands.

Quill Club Writers has now been doing their good work for more than five years, have produced 40 books with nearly thirty schools, and there are nearly 250,000 children at schools across the country reading their books as part of their curriculum. Browsing through their website, I did notice that school authorities were happy with what their team does. Sunil Agarwal of DPS Agra admitted that: ‘education isn’t only high marks and a big degree. Education today is truly all rounded’ and Amit Bhalla from Manav Rachna Educational Institutions believes that ‘in this era of academic excellence only, our children took up the pen – not to write exams, but to write stories’. Tanya Pandey, an author, called their sessions ‘a potpourri of life lessons, anecdotes and disciplined writing. That’s how I’ve become a good writer and a better person. Here’s to more steaming cuppas over plotlines and grammar’.

To be able to create something lasting will always be the strongest dream of all of us… but not everyone gets the right mentors. Without the right mentors we will all be in a world ‘full of almost invisible people – each at different stages of fading’ as Aditi Mishra wrote in her story in one of the anthologies produced by Quill Club Writers, and no one wants to be ‘sad, scared, huddled in groups, talking frantically, trying to establish communication to win some more time’.

Launching a startup is similar to making a plane take off...