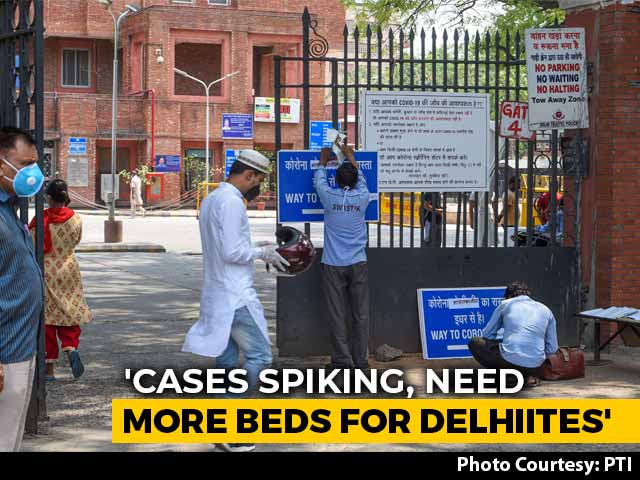 The number of coronavirus patients in the city has been on the rise over the last week, registering a jump of more than a thousand patients each day.

Hospitals run by the Delhi government and some private hospitals will be reserved only for residents of Delhi, Chief Minister Arvind Kejriwal said today, amid a huge controversy over availability of beds. At the same time, he said that Delhi will unseal its borders, which were sealed in the first place “thinking that our hospitals will be flooded with people from other states”.

The number of coronavirus patients in the city has been spiralling over the last week, registering a jump of more than a thousand patients each day. The total in the national capital has now crossed 27,000.

The decision, Mr Kejriwal said, was made on the advice of a special five-member committee of doctors formed. The committee has estimated that by the end of June, Delhi will need 15,000 beds. “They believe that the 9,000 beds that are currently with us will be taken over in three days if we allow people from other states to take admission,” Mr Kejriwal said at a virtual press conference today.

The Chief Minister had also sought suggestions from the people after reports of no availability of beds in hospitals. Many others were turned away by hospitals, which said they were over-run with patients. Today, Mr Kejriwal said 90 per cent of the residents suggested that hospitals be reserved for them till the coronavirus crisis is over.

Following the controversy over beds, the Delhi government had earlier blamed laboratories, saying they were testing asymptomatic patients, and hospitals for admitting them. Mr Kejriwal had also said a “black-marketing of hospital beds” was on.

With Delhi starved of revenue, Mr Kejriwal had announced in April that the city was “ready to lift the lockdown”. At the time, he had also said Delhi’s hospitals were ready to handle the spike in cases that might result.

In an interview with NDTV on Saturday, Mr Naqvi said: “How can Delhi’s beds be reserved for people of Delhi? How can Mumbai’s beds be only for Mumbaikars? How can Kolkata’s beds be only for people of Kolkata? There isn’t a requirement of passport and visa to come to Delhi. People from all across the country come to the national capital for treatment. There shouldn’t be any politics in this. There is a need for sensitivity”.

ASDC Anticipates Hiring Over 1 Lakh Candidates for the Industry

How to Upgrade to Windows 10 From Windows 7 or 8

Experts dwell on NEP provisions at a Seminar on Quality Assurance...