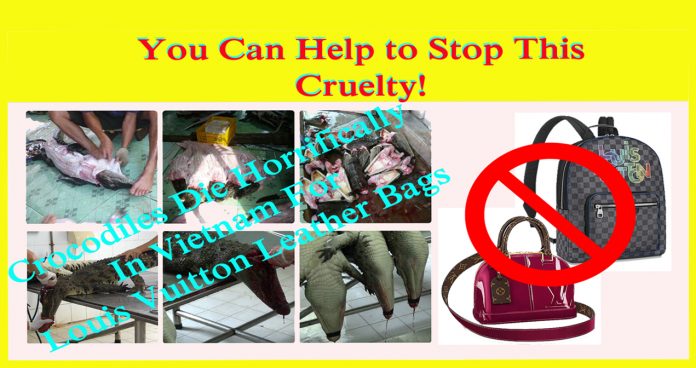 PETA has exposed suffering on reptile farms in the U.S. and Africa, and now eyewitness footage reveals the horrifying reality for tens of thousands of crocodiles in Vietnam raised and violently killed to make “luxury” leather bags sold around the world. Two of the farms investigated supply crocodile skins to Louis Vuitton’s parent company, LVMH, and “some of the biggest brands,” according to a farm owner.

Please take a look at what purchases of crocodile-skin bags, belts, or watchbands could be supporting, and then take action to help stop this abuse.

Necks Cut Open and Rods Rammed Down Spines While Alive

Workers electroshocked crocodiles and then attempted to kill them by cutting into their necks and ramming metal rods down their spines. The animals shake vigorously as this happens. One crocodile can be seen lifting his leg after he was cut open. Then workers leave him to bleed out.

This killing method has long been shown to be inhumane, and experts have found that crocodilians remain conscious for over an hour after their spinal cord has been severed and their blood vessels cut. A reptile expert who watched footage of the crocodiles being slaughtered said that:

“the neck incisions would have been very painful and inhumane,” and “There is no probability that these animals ‘died instantly.”

Skinned While Still Bleeding and Moving

Workers took the crocodiles into an adjacent room and cut off their skin—a process that takes 15 to 20 minutes per animal. Footage shows that one crocodile continued to move after being skinned.

The investigator visited a farm that holds tens of thousands of crocodiles and slaughters 1,500 of them every three months. At this farm—which supplies skins to Louis Vuitton—about 5,000 crocodiles were kept in small, concrete enclosures—some narrower than the length of their bodies. The investigator was told that they are kept in these conditions, which a reptile expert called “overly-restrictive, understimulating, and inhumane” for large crocodiles, for 15 months before finally being slaughtered.

At this farm and another one that supplies skins to LVMH, crocodiles were packed into concrete pits. When several animals are housed together, it’s likely that aggression and injuries will result, and these commonly lead to infection and disease. One crocodile was missing a tail.

Skin Cut and Pulled Off

After the crocodiles were slaughtered, workers cut and pulled off their skin—all just to make “luxury” crocodile-skin bags, wallets, and other items to be sold by Louis Vuitton and other brands.

You Can Help Stop This Cruelty!

PETA has exposed cruelty at reptile farms on three continents, and the story is always the same: grim, close confinement and a violent death. Before buying items made out of exotic skins like these, please stop and think of the animals they come from and their intense suffering. Don’t support this cruelty with your purchases.

Trump warns APPLE, either to manufacture in US or face tariffs