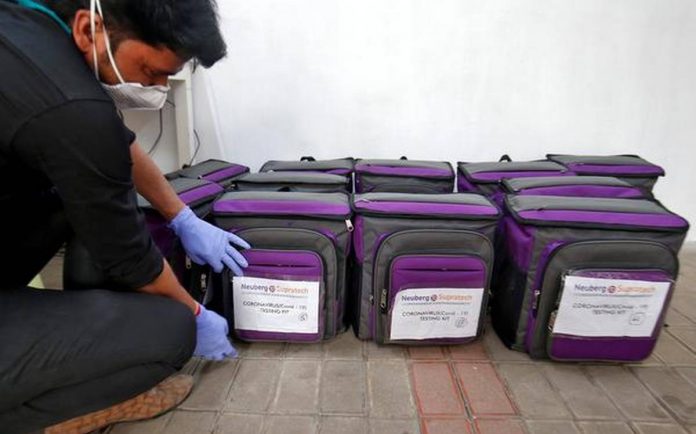 A large consignment of testing kits for the novel coronavirus pandemic is scheduled to reach India from China on Thursday, sources have confirmed. The kits are expected to boost India’s testing capacity in a major way as the country aims to ramp up its testing capacity. According to available information, 5.5 lakh Rapid Antibody Testing Kits sourced from Guangzhou Wondfo and Zhuhai Livzon and 1 lakh RNA Extraction Kits from MGI Shenzhen are among the consignment that will reach India on Thursday.

The consignment is part of the total order of 15 million personal protective equipment (PPE) kits and 1.5 million rapid testing kits that India had ordered from China. The Hindu had reported earlier that India had called upon China to fulfil those orders, amid concerns over tightened regulations on exporting such equipment by China after several Western countries complained over quality of exports.

Vikram Misri, India’s ambassador to China said in an online interaction with reporters on Tuesday that deliveries of the medical supplies for India would be stretched until the end of April. Around six consignments of vital medical supplies are expected to reach India from China during the next fortnight.